Facial recognition technology is something Australia can be proud of

Either you love every single measure implemented in the name of safety or you love terrorism, and that's the simple truth of it, writes Peter Chudd*.

If a CCTV camera in a public place recorded and catalogued a smile on my face this week, it’s because state and territory leaders finally agreed to the government’s new facial recognition systems.

Thanks to this revolutionary system, my wonderful smile will be shared amongst a litany of government departments, linked up to my passport and driver’s licence, and will be used to instantly identify me as the man who loves the coming of the future.

The program aims to bolster national security by using facial recognition technology linked with personal information to allow for speedy identification of suspicious people doing suspicious activities such as being in a public place. Honestly, what reason is there to be in public anymore unless you’re up to no good? That’s cause enough for a warrantless search, in my opinion.

Once again, we are gaining a valuable tool in the fight against terrorism and all it cost was a slight encroachment on our civil liberties. What a bargain!

Unfortunately, not everyone is on board with the idea. The Luddite public love to panic prematurely, crying that a new technology is the precursor to a totalitarian state. I’m much more measured. I’d rather wait and see if a totalitarian state emerges and then, if it does, ingratiate myself with the leaders. I’m putting the civil back into civil liberties.

It’s typical of the outrage brigade to screech bloody murder at the very thought that these technologies will be used for profiling without even bothering to ask about the speed or efficiency of the profiling.

Others still will question the effectiveness of the program, but I say that even if these measures may only provide a false comfort, at least that’s something. It’s the placebo effect of counter-terrorism. We’re chewing the echinacea of freedom, people, and it tastes good!

Sure, these measures seem a little Orwellian, but I’ve always been a strong believer in Orwell that ends well — and this program is sure to end well.

Still, the Luddites are unconvinced. They love to point to foreign examples like the Beijing temple that required face-scanning for use of a public toilet. Personally, I think that’s a terrific improvement. We can’t have the wrong people using our bathrooms. Why, who knows what they will do in the public space I visit to defecate.

Anyway, just because this technology has already been misused in Beijing does not mean it will be misused in Australia. We are a different nation, we will misuse the technology in different ways. Any abuses of power seen in this nation will be uniquely Australian.

What makes us think that our government would not be brilliant at handling this data? Sure, there were massive logistical problems with the census, we can’t seem to run a postal survey and haven’t been able to keep the plans for our spying headquarters secret. That doesn’t mean we won’t suddenly do an excellent job with this. Have a little faith.

This may seem like a strange position for me to hold, since usually I would advocate for smaller government, but we should know by now that principles cannot hold against national security. Either you love every single measure implemented in the name of safety or you love terrorism. There truly is no middle ground.

[Your surveilled life: no escape from the Politicians’ Panopticon]

Thank god one person in the media elite had the sense to see the genius behind this program. Sonia Kruger, my choice as the intellectual shining light of Australian television, was one of the few personalities brave enough to openly endorse the measures, saying “Bring it on. Big Brother, bring it on.”

Kruger has again proven herself to be the breakfast television host most vocally in favour of massive expansions of unchecked state power — and frankly, that anthropomorphic block of cash could learn a thing or two from this shining example.

It took Winston 40 years to win the victory over himself and love Big Brother. Kruger has done it in a portion of the time. May the facial scans of the future look upon her kindly.

Make no mistake, this program will become the great pride of Australia.

If it saves one life, it is entirely worth the cost. That might seem like a low bar and one that cannot truly be verified but that’s the beauty of a national security overreach. Every moment that there isn’t a terrorist attack is proof that our program is working. Any moment that there is an incident simply proves that we need to give the program more powers.

Truly, this is the dawning of a new age for Australia. Personally, I’m excited. If you’re not, I can understand that and will not bother you further except to ask one request:

Please, smile for the camera.

*As shouted down the phone line to satirist James Colley. Too Right: Politically Incorrect Opinions Too Dangerous to be Published Except That They Were is out now. 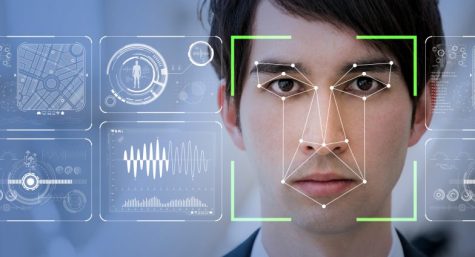 Also I’m a big believer in join government and private industry Ventures. This facial scanning could be linked to our Facebook and Google account location services to enhance our shopping experiences and a raft of other life enhancing initiatives.

Shouted down the phone line? Surely the microphones in the fridge, the TV, the microwave and the electric toothbrush are sensitive enough without shouting?

Don’t forget the one in the toilet Rais.

Children and teenagers under the age of 18 do not have driving licences and most do not have passports. Facial recognition is bound to fail as it leaves out these citizens.

I’m 64 and don’t have those things either

Yeah but they can just lock up the 10-18 year olds without charge now – they can keep tabs on them that way!