Their back pages. Ah what a glorious day: the publishing of parliamentary expenses, which gives us a chance to catch up on what our politicians are reading (or at least, what they’re asking us to pay for them to read).

Noted bibliophiles Senator George Brandis and MP Warren Entsch have both been more restrained in the last year. Brandis purchased a single book: BBC reporter Nick Bryant on The Rise and Fall of Australia: How a Great Nation Lost Its Way, while Entsch sprung for six copies each of The Last Crocodile Hunter and A Smile For My Parents and a single copy of Maya Angelou’s Letters to My Daughter.

Shadow Assistant Minister for Infrastructure Pat Conroy, picked up Karen Middleton’s book about his colleague Albanese: Telling It Straight, as well as several war histories — Billy: My Life As a Teenage POW, Anzac Ted, Victoria Cross Heroes of World War One: 628 Extraordinary Stories of Valour, The Great War Diaries: Breathtaking Colour Photographs From a World Torn Apart, and One Woman’s War and Peace: A Nurse’s Journey In the Royal Australian Air Force.

Politicians are often wont to buy children’s books to give away at school (Barnaby Joyce grabbed Harry Potter and the Philosopher’s Stone)  — we wonder who received Emma Husar‘s 10 copies of Clementine Ford’s Fight Like a Girl? And the choices of Senator Lee Rhiannon will probably fail to surprise anyone: Karl Marx: Greatness and Illusion and Rules for Revolutionaries: How Big Organizing Can Change Everything.

The trend that no one asked for. Last week, PM Malcolm Turnbull gave us the cringes when he began to rap on The Project (without being asked), using two pre-written lines about Waleed Aly and AFL. Now, only slightly less awkwardly, Labor leader Bill Shorten has taken part in a rap battle with FM radio hosts Fitzy and Wippa (known otherwise as Ryan Fitzgerald and Michael Wipfli) with Ray Hadley thrown in as well. Shorten’s lines were more effective than the PM’s last week, but he won’t be getting a record deal any time soon. 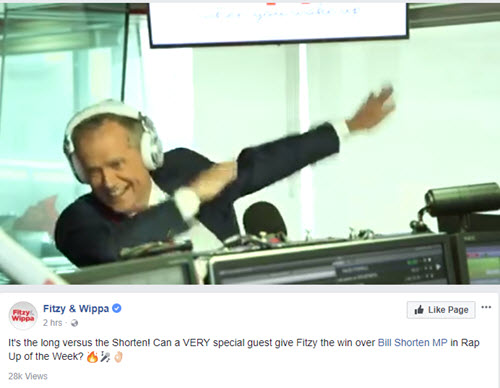 What next for the No campaign? A caller to 3AW this morning said that religious leaders are meeting in secret to discuss what happens next if the Yes vote wins the marriage equality postal survey. The caller said they could be looking to get their places of worship fully removed from the Marriage Act. We’ll be watching this space.

Some good political news at last. Special Minister of State Scott Ryan is now back on deck after an extended period of leave for health reasons. Welcome back, Minister. And we imagine Mathias Cormann, who has been filling in for him while doing his low-key day job as Finance minister, is pretty stoked too — at least until the government’s human Scrabble blank is given another acting ministerial role. Now, Scott … about that foreign donations ban …