It was another early start for journalists covering the George Pell case in Melbourne this morning. And other media tidbits of the day.

Today in Media Files, Labor MP Michael Danby is facing pressure from his party over an attack on an ABC journalist, and reporters have had another early start preparing to cover George Pell’s court case.

Danby under pressure over ABC attacks. Federal Labor MP Michael Danby is facing preselection pressure over his attacks on ABC journalist Sophie McNeill. Danby has taken out ads in Australian Jewish News two weeks in a row, accusing McNeill — the ABC’s Middle East correspondent — of being imbalanced in her coverage of Israel and Palestine. He paid for the ads using his electoral allowance, and Fairfax reports that the Labor party is preparing to challenge him at preselection at the next election, if he doesn’t retire.

Danby won’t say how much he spent on the ads, and has responded to criticism by saying he’s simply representing the views of his electorate of Melbourne Ports. “A large portion of my electorate think the coverage of the ABC consistently omits information that doesn’t align with the Palestinian narrative,” he said. “The ABC’s support for its correspondent is to be expected. Just as a member of parliament is expected to support the constituents in his or her electorate, which is what I have been doing.”

Early start for Pell reporters. It was another early start for journalists covering the George Pell case in Melbourne this morning. Freelance journalist Lucie Morris-Marr, who’s long been covering Pell for CNN, was one of the first at the Melbourne Magistrates’ Court this morning, tweeting a picture with ABC journalist Isk Razak clocked at 4.47am. 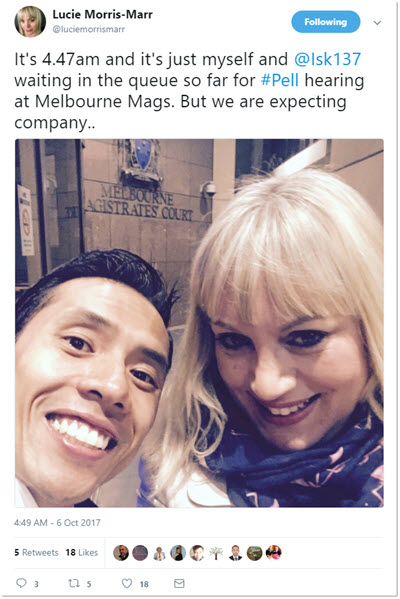 Weinstein ‘gone’. In a long-expected New York Times story, the well-known Hollywood figure Harvey Weinstein has taken leave from his own company, after being accused of decades of sexual harassment against women.

In a detailed article, it is claimed Weinstein sexually harassed young actresses Ashley Judd and Rose McGowan, and others who worked for him, with claims of at least eight settlements with women. Variety reported that Weinstein is on leave, but Deadline.com reckons he is “gone”.

Some of the allegations date back to the heyday of Miramax in the 1990s, others are as recent as 2015. Weinstein didn’t exactly deny these allegations. He told NYT: “I appreciate the way I’ve behaved with colleagues in the past has caused a lot of pain, and I sincerely apologise for it. Though I’m trying to do better, I know I have a long way to go.”

In a statement later in the day, a lawyer for Weinstein said he was going to sue the Times. In a statement, attorney Charles Harder (the lawyer who destroyed Gawker on behalf of wrestler Hulk Hogan in a suit financed by right-wing billionaire Peter Thiel) said the story “is saturated with false and defamatory statements about Harvey Weinstein”.

“It relies on mostly hearsay accounts and a faulty report, apparently stolen from an employee personnel file, which has been debunked by nine different eyewitnesses,” the Harder Mirell & Abrams lawyer added. “We sent The Times the facts and evidence, but they ignored it and rushed to publish. We are preparing the lawsuit now. All proceeds will be donated to women’s organizations.”

The last comment about the donation is pretty cynical. — Glenn Dyer

Tonight on the ABC, confirmation there are no longer any exclusives. Young Endeavour, the prequel to Inspector Morse, at 8.30pm, which has already done the rounds on Seven and 7TWO. —Read the rest on the Crikey website

The truth about the pro-Israel lobby’s influence

Mr Danby says, “Just as a member of parliament is expected to support the constituents in his or her electorate, which is what I have been doing.” Who knew Victoria was so big that one of its electorates is located on the eastern end of the Mediterranean?

Many have noted that the Chosen People seem to also get to choose the land/s they want.