The detail of Lachlan Murdoch's security, er, detail. And other media tidbits of the day.

Today in Media Files, ABC will cut Lateline in a restructure of its current affairs departments, and why does Lachlan Murdoch need personal security guards?

ABC axes Lateline. The ABC will cut its evening current affairs program Lateline under a major reshuffle of its current affairs offerings. The show, hosted by Emma Alberici, was cut back and moved from the main channel to the ABC News channel after budget cuts at the end of 2014. There will be a new late night news bulletin added to the rundown that will air on the main channel, and Stan Grant’s Friday evening show The Link will also be cut. He will instead host a 9pm news discussion program on the ABC News Channel. He will also be chief Asia correspondent, and Alberici will be chief economics correspondent. There will be specialist investigative and specialist reporting teams established. Crikey understands there will be no net job losses but some redundancies — News division staff will be able to express interest in redundancy until October 19. News director Gaven Morris said in a note to staff that axing the programs was not a reflection on the teams working on them. “Lateline has a proud 28-year history, and The Link has done wonderful, innovative work in a difficult timeslot,” he said. “However, with audience habits changing, we can deploy these resources more effectively in other ways. Viewers would be as well-served as ever with daily and weekly television news and current affairs on ABC TV and on the ABC News Channel.”

Lachlan Murdoch’s bouncers. The News Corp proxy statement released Wednesday in Australia for the company’s 2016-17 annual meeting has an intriguing bit of information buried in the sections on non-executive director compensation (yes, News Corp claims that Lachlan Murdoch, the co-chair with dad Rupert and a major shareholder with the rest of the family, is a non-executive director!).

“Represents certain security expenses provided to Mr. L.K. Murdoch, Co-Chairman of the Company. These services are incremental to security arrangements provided at News Corporation business facilities. The Compensation Committee has approved these expenses as reasonable, necessary and for the Company’s benefit.”

But seeing he is on the boards of both companies, it begs the question of just who wants to be nasty, stalk or harass Lachie to warrant the security expenses — why is it only in his News Corp capacity? And why does anyone think that nasties limit their harassment to the roles their targets play in certain companies. Surely they stalk/harass people regardless of whether they are co-chair of News or executive co-chair of Fox? Was this payment anything to do with his time in Australia stalking the Ten Network? — Glenn Dyer

Facebook launches Russian ad defence. Facebook has taken out full-page newspaper ads defending itself as it deals with criticism over Russian ads on Facebook during the US presidential elections. The ads were in The New York Times and The Washington Post. About 10 million Americans saw Russian-linked ads on Facebook, and the company has said in the ads it is going to try to be more transparent. 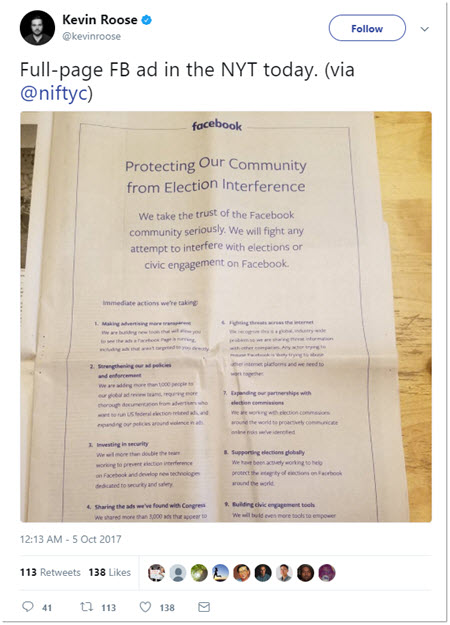 Glenn Dyer’s TV Ratings. So The Block was on Nine last night, and Doctor Doctor, but who cares how they rated and that Nine won the night? The Seraglio beckoned again for Sophie. I think Ten should appoint Sophie Dowager Bachelorette in residence for 2018 and she can also be the matron in charge/Den Mother/Agony Aunt for next year’s herd of bachelors. The Bachelorette this year is fun, almost a pantomime, compared to the po-faced seriousness of last year, the year before that and The Bachelor. The choice of convertible last night was an American TV production company’s idea of an automotive wet dream. She would look a lot cooler in a snappy Merc or Beemer open top, especially with the Audrey Hepburn/Grace Kelly scarf look.

The Bachelorette though couldn’t save Ten’s Wrong Girl — the Bachelorette had 1.04 million national viewers and The Wrong Girl, just 476,000. That’s another big thumbs down from the core audience. Seven’s Criminal Minds, its most popular US drama managed only 645,000 at 8.30pm last night. The second repeat episode at 9.30 pm averaged 526,000 — it’s dying.  The Block grabbed more than 1.9 million national viewers and Doctor Doctor, 1.20 million — both new highs for a Wednesday night.

Cannonball is down in the advanced schedules to be shown tonight at 7.30pm, but it won’t be — Seven has yanked it and is running 90 minutes of Home and Away instead. Perhaps Seven does have standards after all and Cannonball was so bad that it has been fired. It will probably end up on 7TWO or 7Mate on a Saturday or Sunday afternoon. It lasted one night, from memory. In regional markets The Block was tops with 572,000 viewers, followed by Seven News with 542,000, then Seven News/Today Tonight with 455,000, Home and Away was fourth with 447,000 and Doctor Doctor was fifth with 416,000. — Read the rest on the Crikey website

ABC News director Gaven Morris: “Viewers would be as well-served as ever with daily and weekly television news and current affairs on ABC TV and on the ABC News Channel.”

That assuming we feel well-served currently….which I don’t. ABC Breakfast, in particular, is monotonously repetitive, restricted to a handful of the same stories every half-hour. And a good chunk of that half-hour is taken by sport.

To be better informed it’s necessary to watch the morning line-up of European news bulletins on SBS. It’s a pity ABC Breakfast- or The Drum – isn’t axed instead of Lateline.

Get the Krackl!n Kates to do Breakfast!

Breakfast seems to be put on to indulge the opinions and whimsies of the presenters…. as is The Dum, the leaning and rotation of it’s “experts” says it all. From chronic reruns of conservative councillors, to Limited News conservative commentator drones painted up as anything from “economists” to “foreign affairs” experts – all with the same anti-left bias.
We can buy their broken record rags if you want that – why is our ABC doing commercials for their sort of opinion as news.
Has Sue Boyce been sick?
Forgetting Carnell’s political roots when she’s on – to invariably defend her Limited News Party?
When will Overington be back after that judgement in the Rebel Wilson case, and after her assault on ?
Jackie Kelly – with her history – defending her party?
What great “civil” standard bearers?

(That Overington “unfinished bout” was vs George Newhouse of course)

Too much ABC current affairs/news is restricted by the interests (not least political) of the presenters (too often conservative reflecting the likes of Murdoch’s partisan abasement of the medium – as if that’s “the norm”? If we wanted those sort of spun views we’d subscribe to Limited News pap.) and the priority of the hierarchy not to upset a crook government – for fear of reprisals.
Where opinion and subjectivity replaces facts and impartiality.
The ignorance of some stories, while glossing over others, by “experts”?
As for Alberici -> “chief economics correspondent”? She wanted to argue with Peter Mandelson on ‘Britain’s post-Brexit bargaining power with the EU’ on tonight’s revue – as if she knew more about the subject than him?