The photojournalist who captured some of the Las Vegas massacre's most striking images tells the story behind them.

Today in Media Files, Daily Mail Australia has fallen for a Las Vegas shooting hoax, and the photographer who took already-iconic images of the shooting has told the story behind them.

Daily Mail falls for Antifa shooting hoax. Daily Mail Australia has fallen for one of the many online hoaxes running in the wake of the Las Vegas shooting. A Facebook page called “Melbourne Antifa” claimed responsibility for the attack in a now-deleted post — something that had been debunked early yesterday. Authorities in the US have not said what the shooter’s motivations were, and the Facebook post sparked claims in far-right media and online that the shooter was connected with Antifa — a loose term for anti-fascist activists.

The Mail‘s journalist Stephen Johnson published his story yesterday about 11am — well after the fake news about Antifa’s involvement had been listed in multiple stories about Las Vegas hoaxes. His story doesn’t include any reference to official comments about the shooter’s motivation, and was still online this morning.

‘I realised people were dying.’ Some of the most haunting images of the Las Vegas shooting came from wire service Getty photographer David Becker, who was already on the scene shooting pictures of the music festival. He’d finished for the evening when he heard the popping sound outside the media tent. Becker spoke with Time about the shots he filed, one of which was published on the front pages of some of Australia’s major newspapers yesterday:

“I stood on a table and started to shoot — thinking to myself, still, that this isn’t really happening, it’s just the speakers popping … I was trying to capture anything that was moving and that had light. It was really hard to get a sense of what was happening.” 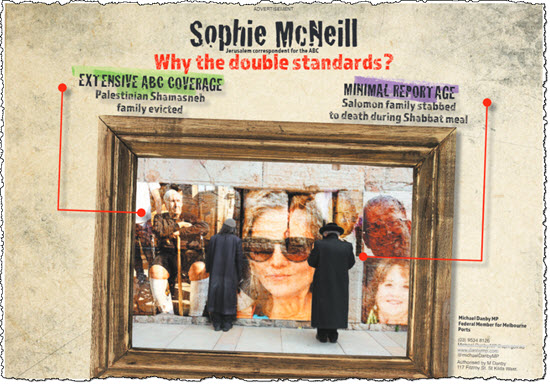 The ABC has this morning responded, saying the ABC had given “due prominence” to the fatal stabbing attack of three Israelis referred to in Danby’s ad, with stories on TV, radio, online and social media:

“This advertisement is part of a pattern of inaccurate and highly inappropriate personal attacks on Ms McNeill by Mr Danby. The ABC has complete confidence in the professionalism of Ms McNeill. Despite unprecedented scrutiny and obvious pre-judgement by Mr Danby and others, her work has been demonstrably accurate and impartial. All ABC News content is produced in accordance with ABC editorial policies and under the supervision of experienced editorial managers.”

Must have: experience in everything. Full-time jobs in journalism can be hard to come by, but we can’t help but think the requirements for a digital journalist at London’s The Sun are a bit over the top (including, but not limited to, experience at a major Australian newspaper, fluent French, experience in international political, fashion and travel reporting): 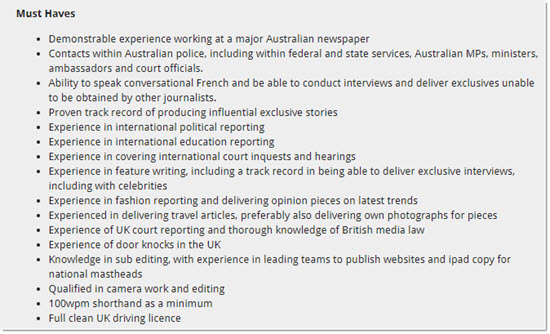 Foreign postings. The ABC has announced two new video journalists for its overseas bureaux. Siobhan Heanue, currently stationed in Canberra for the ABC, will take up a south-east Asia correspondent role based in Delhi, and national science reporter Jake Sturmer is off to Tokyo as north Asia correspondent. Heanue is replacing James Bennett, and Sturmer is taking over from Rachel Mealey in Tokyo.

UK phone-hacking cases settled. The Trinity Mirror newspaper group in the UK has made payouts to Steve Coogan and Sienna Miller to settle phone-hacking legal action. Coogan was reportedly paid a six-figure sum over 62 articles printed over almost 14 years that used details he said were obtained by hacking his voicemail, obtaining information from third parties and using private investigators. Miller has been paid “substantial” damages and legal costs, and claims by TV presenter Jamie Theakston and former EastEnders actor Michael Greco have also been settled.

Glenn Dyer’s TV Ratings. As Nine won another night thanks to The Block (1.94 million nationally) and The Big Bang Theory (1.42 million nationally), we had news of a new drama planned for 2018. According to media reports overnight, UK star Dominic Monaghan is to star in a miniseries entitled Bite Club. The host of the BBC’s Wild Things will play a troubled police officer and dog-handler in the “unconventional police procedural miniseries” from Sony Pictures TV and Channel Nine. It will be an eight-part drama (so it will get the Australian mini-series tax deduction).

According to the blurb from the producers, Monaghan’s character, Stephen Lamb, and an ex-lover (both of whom survive a “terrifying” shark attack) “are thrown together by fate to hunt down murderers”. Lamb grew up in an abusive family, was chained to a dog and bitten as a child, and as a result has developed a serious psychosexual perversion that will play out across the series,” The Hollywood Reporter said. For a PR blurb to describe a shark attack as “terrifying” is nonsense. Has anyone known a shark attack to not be “terrifying”? And the title, Bite Club is a weak pun on Fight Club. Has this one jumped the shark before a frame is shot?

Mendacious right-wing bile is the Daily Mail’s stock in trade. To suggest that it ‘fell for’ the hoax about the Las Vegas shooter is a very generous interpretation of what happened.