The weight of evidence is turning against corporate tax cuts as Moody's blasts Donald Trump's proposal for tax windfalls for the world's biggest companies, Bernard Keane and Glenn Dyer write.

Forget the shoddy analysis and boosterism about Trump’s tax talking points from the local media, Scott Morrison and the parasites at the failing Business Council. Let’s try some hard facts. Moody’s credit rating agency has subjected to the “package” of ideas for tax cuts for the super rich and corporations and elimination of tax deductions to some basic scrutiny, and it doesn’t look pretty.

In its latest credit outlook issued yesterday, Moody’s warned the package — which it noted “is light on details and is the first step in congressional negotiations” would likely be credit negative for the US Government”. Moody’s isn’t interested in the Laffer Curve nonsense that a cut in tax will bring higher growth, higher revenues and a lower budget deficit: it knows the package is unfunded and thus deeply damaging to the US fiscal position.

“The framework is broadly in line with our assumption that tax cuts would not be offset by equivalent cuts to spending, which would put upward pressure on the federal budget deficit and debt. The tax reform’s effect on economic growth and, in turn, federal government revenue would also affect US credit strength. Given the information that has been released thus far, we do not think that any increase in taxable income from higher growth will compensate for the proposed cuts in tax rates.”

In other words the US deficit would rise sharply, as would American debt. And we know how well Congress handles debt and deficit issues. But then there’s the economic impacts of its proposed attack on low- and middle-income earners who rely on deductions to lower their tax bills (albeit at a tiny fraction of the amount the super rich can):

“The proposed elimination of the deduction for state and local taxes would be credit negative for the public finance sector by raising the effective cost of state and local taxes for many taxpayers and reducing disposable income. The reform’s effect would be to increase political resistance to tax increases and suppress home values and property tax revenue growth, particularly in high-tax regions.”

Moody’s warns of problems with “collateralized loan obligations and commercial and esoteric asset-backed securities backed by speculative-grade obligors if the obligors fail to benefit enough from other changes. Because many of the borrowers of prime jumbo loans [loans that exceed federal lending limits] underlying residential mortgage-backed securities are in higher tax jurisdictions, eliminating deductions for individual state and local tax payments would be credit negative if it resulted in a net tax increase for enough of these borrowers.”

These securities include securitised car loans, home loans and student debt — the three largest areas of debt for American consumers — and in car and student loans, the two biggest areas of worry from regulators. Many analysts fear that these two areas are the current equivalent of the sub-prime mortgages that helped trigger and fuel the GFC. And believe it or not, sub-prime home mortgages are making a comeback in the US, including through securitised loans.

Moody’s does see benefits — “including in particular, efforts to broaden the tax base by eliminating many tax deductions. Generally, a broader tax base creates more predictable and resilient revenue flows and reduces the distortions of economic actors’ behavior [sic]…” And, of course, corporations would benefit, but wider benefits would depend “upon how corporates put monies to use. For banks and insurance companies, a lower corporate tax rate would boost profitability. Although additional profits would not necessarily be used to directly bolster capital, they would provide greater protection to capital in the event of increased credit costs or claims… The asset management industry would benefit from a lower tax rate.”

That phrase about “depending upon how corporates put monies to use” is the central issue of the entire debate. The strong, indeed compelling, evidence from previous tax cuts is that corporations will use the windfalls they get from tax cuts for share buybacks and executive remuneration boosts. And the lie that the majority of the impact of corporate taxes are borne by workers is coming under steady attack, too. Even the conservative Wall Street Journal and Fox News reported that the US Treasury has now removed from its website an embarrassing 2012 study that demonstrated workers bore less than 20% of the impact of company taxes.

Like the government’s proposal for a massive tax handout to multinationals here, Trump’s package is a continuation of the economic war waged against low and middle income earners by the very wealthy and large corporations for a generation. It will leave ordinary taxpayers with a legacy of higher taxes, more debt and a lower credit rating while the executives who run the world’s biggest corporations laugh all the way to the bank. 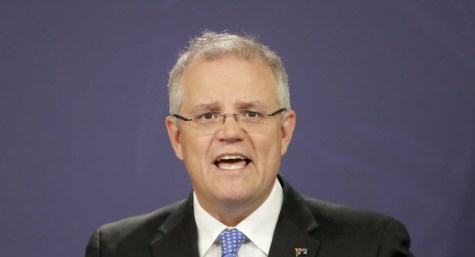 Property boom could get ugly for buyers … and the government

‘…while the executives who run the world’s biggest corporations laugh all the way to the bank.’

Of course there’s always the possibility their bank may not survive the next GFC assault. Apparently, history teaches us nothing.

“Debt! Schmet.” They can always borrow from Barney Rouble’s Putin Bank (where “Your Interest is Our Interest”) – Dump knows how that works.

The addictive, rationality evaporating nature of Ponzi schemes is that they work just fine, everyone gets rich until they don’t, very, very suddenly.
One of the early 20thC financiers, Gulbenkian, when asked how he became so rich despite the Great Depression, answered, “By selling too early.”
As kiddi-winks surely we learned the same lesson with pass the parcel or musical chairs?
I guess not.

THEFT, on a grand scale.