And the Wankley goes to … <em>The Sunday Telegraph</em>, for making up a rainbow flag ban

Did you hear that the NRL banned rainbow flags from the grand final? You might have, but it's not true.

This weekend’s Sunday Telegraph was a bumper edition, with a 20-page wrap-around and glossy poster dedicated to yesterday’s NRL grand final. But it was the inside front page that’s earned the Tele a Wankley Award — Crikey‘s way of recognising egregious contributions to journalism. 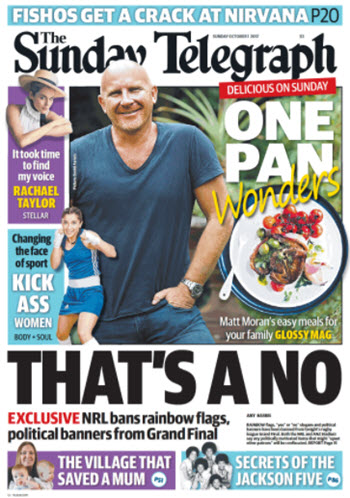 In a report of yet more controversy about marriage equality tied in with the NRL final, journalist Amy Harris reported that “rainbow flags and yes or no slogans have been banned from tonight’s rugby league grand final and will be seized by security officers making compulsory bag checks”. The story went on to clarify that security officers would have “some discretion”, using some quotes from ANZ Stadium’s official policy, before rehashing the objections over rapper Macklemore performing his “pro-gay” song Same Love, which was first released in 2012.

The story was quickly picked up and the “ban” was reported in early news bulletins on Seven, Nine, 4BC in Brisbane, 3AW in Melbourne, 2CC in Canberra, Gold FM in Melbourne, and Nova 96.9 in Sydney.

But it didn’t take long for the NRL and ANZ Stadium to shoot down the story.

Yesterday morning, the venue put out a statement saying there had been no ban on rainbow flags that meet the standard requirements, and the NRL told Nine that rainbow flags were only banned if they exceeded the size requirements. But the story remains online as it was.

Flags and banners over 1.4 metres were not allowed in the general seating areas, and bigger flags were allowed in official supporter sections, but needed to be approved by the teams first. Offensive, political, commercial and religious signs can be confiscated by security guards, who use their discretion.

To support its story, the Tele used quotes from ANZ Stadium, saying that “everyone’s allowed to express their views provided they don’t upset the person next to them”.

The NRL came out in support of same-sex marriage last month.

NOTE: The headline for this story has been updated to correct the headline, which incorrectly referred to The Daily Telegraph instead of The Sunday Telegraph.

One of the problems is the pathetic commercial news outlets that regurgitate all their news from the morning papers, don’t do any work themselves, and don’t do any checking.

False Flag Operation by RagPaper – some papers should be pulped on publication. What a junk first page – people actually pay money for it?