The Age continues the Sudanese gang narrative with crime statistics, and Hugh Hefner has been remembered as a stunning success.

Today in Media Files, The Age continues the Sudanese gang narrative with crime statistics, and Hugh Hefner has been remembered as a stunning success.

The Age‘s tabloid turn. Victorians would be well aware of the perils of young Sudanese criminals. As Crikey reported in April, tabloid the Herald Sun had dedicated 28 front pages to the “notorious” Apex gang, which police have since said was made up mostly of Australian-born crims and has now broken up.

But it was The Age with a page 2 headline this morning screaming that “Sudanese youth crime stays high”. 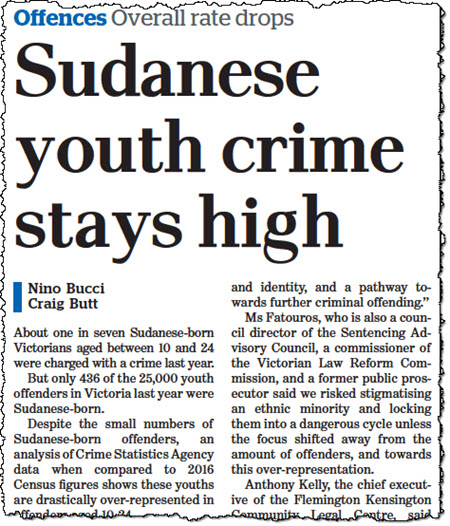 Read into the story, based on Crime Statistics Agency data, and “only 436 of the 25,000 youth offenders in Victoria last year were Sudanese-born”, and “Deputy Commissioner Andrew Crisp on Thursday described youth offenders as a ‘United Nations’, and Australian-born offenders remain by far the most likely ethnicity accused of crime”.

The headline on the online story is much more sedate, reading: “Victoria’s crime rate falls but violent youths, home invasions still a concern”. The story didn’t appear in today’s AFL-heavy print version of the Herald Sun, and its online story published yesterday didn’t mention Sudan at all.

Vale Hugh Hefner. Playboy creator Hugh Hefner died on Wednesday in LA (in case you missed it). The New York Times has remembered him as a “stunning success”:

“He was compared to Jay Gatsby, Citizen Kane and Walt Disney, but Mr Hefner was his own production. He repeatedly likened his life to a romantic movie; it starred an ageless sophisticate in silk pyjamas and smoking jacket hosting a never-ending party for famous and fascinating people.”

Publications have obituaries ready to go for people of his age and fame, which proved problematic for whoever was responsible for filling in the blanks at The Hollywood Reporter yesterday: 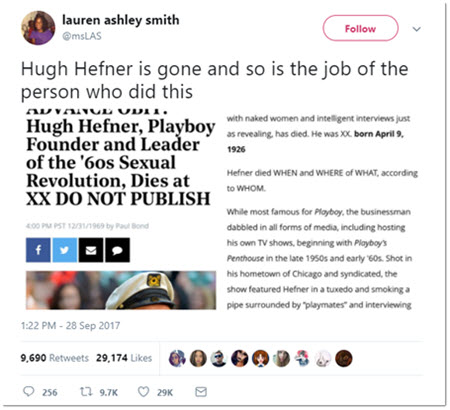 ‘No-nonsense root vegetable’. In a story you would only ever find in the NT News, Judith Aisthorpe, “Phallic Foods Reporter”, has this yarn about a phallic-looking sweet potato left to go off in a Darwin supermarket. 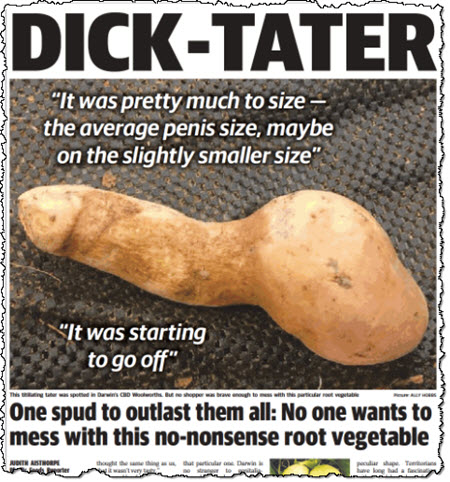 ABC audio current affairs editor appointed. Tanya Nolan has been appointed to the new ABC position of managing editor, audio current affairs — a role that straddles radio and news, overseeing some Radio National and some current affairs programs. Nolan has been with the ABC for 20 years, and has been managing ABC News TV channel’s programming, including The Drum, The Mix, Planet America and One Plus One. In the new role, Nolan will be reporting to the heads of both radio and news, and the ABC says she’ll be overseeing greater co-ordination and collaboration between flagship programs in the two typically separate divisions. Her start date is yet to be confirmed.

More 18C follies. It’s 18C time! Yes, like Morris dancing and Channel Seven, it’s the thing that won’t die, though its purpose has long since been lost in the mists of time. This one’s a treat, an article of meta-futility by Simon Breheny, IPA puppy dog, in the Oz. Shock horror, a vexatious CAPITALS USING email writer to the Oz demanded that certain columns by Planet Janet and others be pulled. When the Oz failed to do so complainant went to the AHRC. Which, uh, knocked the complaint back immediately, Breheny has to admit. The complainant started a Federal Court suit, under old legislation, Breheny has to admit; the law has been changed to require such complainants to seek leave of the court to proceed, thus ensuring they can be dismissed out of hand. How’s that for a non-starter — an article that has to say not once but twice that the problem it’s raising doesn’t exist anymore. Is this a contender for the lamest anti-18C piece? It must be in the running.

Meanwhile, the Oz and the IPA have politely passed on any sustained assault on the most recent attack on free speech — the shoddy, rushed-through, “time-limited” vilification legislation attached to the plebiscite. That, more than anything, has strengthened 18C/D/E. How curious the Oz is leaving it alone. Still, we sympathise with them over vexatious legal issues — like large media companies lending their lawyers to individual journos to cost-bomb critical news websites. Such conduct would be news to all of us, I imagine. — Guy Rundle

Glenn Dyer’s TV ratings. The Bachelorette might not have given Ten a win in total people or the main channels, but it snaffled all the major demos. But Sophie couldn’t help The Wrong Girl — its audience last night was a fraction of that for The Bachelorette, which had 1.08 million national viewers (809,000 in the metros). The Wrong Girl had 498,000 — in other words more than 50% of the Bachette’s audience deserted The Wrong Girl. The core female viewer is just not interested.

And what happened to Cannonball last night? Was it really so bad that Seven pulled it from the schedule at the last moment and used instead a UK clips/internet program called Here Comes Trouble? It managed just 238,000 from 7.30 to 8.30pm in the metros and 412,000 nationally. Spakfilla.

And then there was the AFL Footy Show on Nine and the NRL effort. As different as chalk and cheese. The AFL production was bombastic, blokey and at times nasty. The NRL Footy Show used to be like that but last night it was real entertainment. Having Erin Molan and the kids’ segment with Darryl Brohman has softened the NRL program over the years and made it more appealing. And in terms of their relevance, the NRL attitude to the marriage equality debate is far ahead of a hesitant AFL. In fact the kerfuffle about Macklemore’s performance at the NRL Grand Final and his singing his song Same Love has put rugby league in a very interesting position. The real story about the performance of the AFL Footy Show is that its flagship Grand Final edition suffered a 38% slide in audience in Melbourne (which is the only market that matters) — from 452,000 a year ago to 280,000 last night (from 7.30pm). From memory, that is the lowest Melbourne Grand Final edition audience ever. — Read the rest on the Crikey website