Tessa-come-lately. One of the The Australian‘s favourite targets (we can’t say favourite for sure, there are too many) Professor Gillian Triggs spoke last night at the Michael Kirby Justice Oration. Her topic was executive and ministerial overreach and the threat that poses to Australian democracy. She spoke in detail of compliant parliaments and ineffective oppositions passing legislation that allows executive power to smother the independence of the judiciary; of judges who fail to take into account our international obligations; of the bitter irony that Australia has not enacted legislation giving force to UN charters that we helped bring about.

So Ms Tips read with great curiosity that The Australian‘s coverage mentions separation of powers only in passing, focusing instead on Triggs’ comments about post-truth politics, and the need for a bill of rights in Australia — both coming towards the end of the night. Was Triggs’ acknowledgment of the oft-observed post-Trump reliance on “alternative facts” really the most newsworthy item of her speech? A Crikey spy has let us know the real reason: according to our tipster, Oz scribe Tessa Akerman didn’t actually get there until “at least halfway through” Triggs’ speech, missing the main points of her argument, and her detailed rundown of two cases that illustrated her point.

You’d think, given their keen, keen interest in reporting on everything Triggs does and says, that they would put more effort into keeping up with the totality of her public statements.

Politics and sport shouldn’t mix, marriage discrimination supporter Tony Abbott says. “Sport is sport!” We agree. That’s why we think Abbott should pay back the thousands of dollars he’s claimed for going to sporting events with taxpayer funding. The ABC’s 7.30 took a look at Abbott’s history of using our money to fund his sports activities in 2013 and found four separate sporting events that Abbott had claimed travel entitlements for participating in, in addition to his annual “pollie pedal” event he claims money for every year. We’re also assuming Abbott will abandon the parliament-wide habit of conveniently finding a political event or meeting that coincides with major sporting events in the same city. And we’ll take it as read he’ll return some of the gifts he’s accepted since the election: a Hurley wetsuit, memberships of surf lifesaving clubs, golf clubs and the position of Manly Sea Eagles’ No. 1 ticket-holder, and a night’s accommodation for participating in the Tour Down Under.

Hadgkiss your chances goodbye. The Age yesterday reported that former Australian Building and Construction Commissioner Nigel Hadgkiss had provided his colleagues with a letter declaring his resignation “brings to an end a 48-year career in law enforcement. In no way do I regret any of that time, challenging though much of that journey has been …”

Hadgkiss was forced to resign after it was revealed he had breached the very laws he was appointed to enforce — directing that changes to right-of-entry laws not be published — and the Federal Court will tomorrow hand down its civil penalty decision. His lawyers argued that no penalty should be imposed, as Hadgkiss had “suffered enough” and, after all, he’d publicly apologised since. Remorse is a factor that is taken into account when setting a penalty — does this letter, declaring he actually regrets not a thing, represent another self-inflicted foot wound for Hadgkiss?

Advertising with teeth. Colgate’s new spring racing campaign for teeth whitener is what you’d expect: Jennifer Hawkins, a hair ornament. All except for that soupçon of accidental white supremacy. The ad reads “for a visibly whiter race day smile” which, has at least more than one meaning. As one Tweeter commented “that’s some optics”. Ms Tips wonders whether any heads are rolling at Colgate over this. 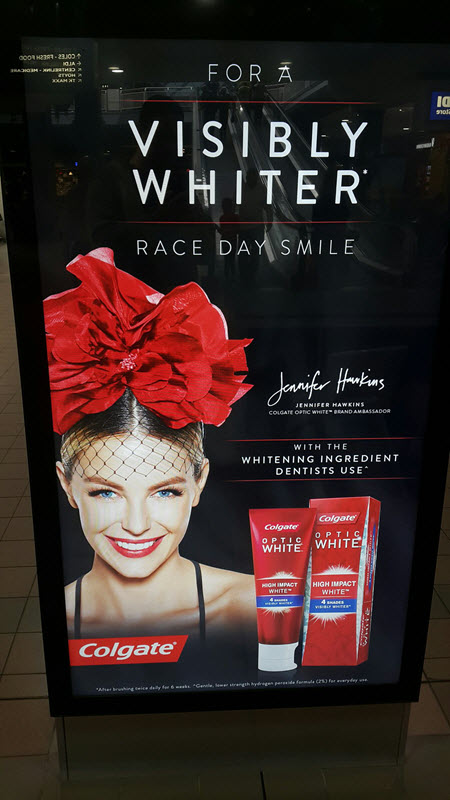 “The ad reads “for a visibly whiter race day smile” which, has at least more than one meaning. ” Only if you are desperate to find offence.

for heavens sake, what a pile of rubbish, crud, b”sht and drawing a very long bow.
‘”For a visibly whiter race day smile”, how the hell could any sane person find anything “racist” in that???
Now do we have to rename WHITE, as in paint, Christmas, snow,brides dresses, hair,clouds,etc.etc. something else in case some idiot finds it racist. And what about Black, as in paint, clouds, hair, dog, etc.etc. that will have to be changed to stop some nutter getting irrational.
And how about any dark skinned person going to the races, what are they to do about their white teeth? Dye them some other colour in case some light skinned person thinks they are taking the piss?? For clucks sake Ms. T go and take a tablet and see your therapist

But Tessa Akerman? The name can not be a coincidence, particularly working at the Oz – nasty bit of genetics the poor girl has if that is the case..!!

Tessa Akerman? The spawn of the Toad. No need to even turn up. Her ciolumn was probably already written.

What a grab bag of annoying tidbits.

Tessa Akerman, yeah well, nepotism reached no greater heights than journalism since I was a young lad. It is possibly the most inward looking, nepotistic industry we have. Miranda Devine could give a lecture on it.

Tony Abbott, using his free speech to demand that sporting organisations should not have the right to speak freely as an organisation, without irony. Something new, not!

And Hadgkiss, I trust he will be foist on his own petard.