After nearly a decade of overstated revenue, finally a Treasurer gets to reveal a better-than-expected budget outcome, Bernard Keane and Glenn Dyer write.

Congratulations to Treasurer Scott Morrison and Finance Minister Mathias Cormann: they’ve handed in the best budget result 2012-13. Back then — although they were no longer around to announce the final outcome — Wayne Swan and Penny Wong got the deficit down to $18.8 billion. Yesterday, Morrison and Cormann announced the final result for 2016-17: a $33.2 billion deficit, which is a sizeable drop from the $37 billion originally forecast last year. Although, the result is relative, of course; in the government’s first budget in 2014, it forecast that the 2016-17 deficit would be a mere $10 billion. 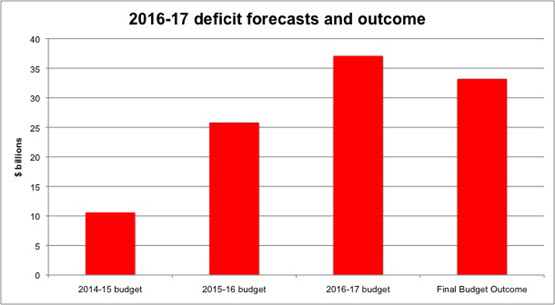 The result is also welcome because it halts a long run of revenue downgrades that has plagued Wayne Swan, Joe Hockey and Morrison himself since the financial crisis (Chris Bowen wasn’t around long enough to suffer it): Treasury would routinely forecast $X billion in revenue, and six months later, the Treasurer would emerge to mournfully report that revenue, in fact, was going to be a figure substantially lower than X. Swan asked Treasury to review its forecasting methodology to fix it up. Hockey promised that “a line in the sand” had been drawn under overstatement of revenue. Both were dudded by their Treasury officials. Indeed, technically Treasury still has a problem, because its original 2016-17 budget revenue forecast was for $411 billion, and the result was $409.9 billion, but we’ll call that one a win for Treasury — especially since, in May, it forecast revenue at $405.7 billion.

The difference since then has been mostly because of our terms of trade, which delivered an extra $2.2 billion in company tax revenue as mining companies delivered higher profits. That’s unlikely to happen again this year; the budget forecast a decline in terms of trade and particularly the iron ore price, and so far the latter is moving in line with the budget’s forecast of $55 a tonne by March next year — and, if anything, that might prove too optimistic, given the Chinese government’s attempt to close excess steel-making capacity and cut back on its lethal levels of coal-derived urban pollution.

The government should also thank Glenn Stevens and Phil Lowe, the drivers of the four interest rate cuts between February 2015 and August last year. Those cuts are still echoing through the economy, especially in the rebound in business conditions and jobs this year. They might also be grateful for the much-criticised investor boom in mortgage lending in Sydney and Melbourne, which had GST and CGT tax collections rise by half a billion dollars each (GST revenue, of course, flows straight to the states). And, on the outlays side, stinginess in social welfare (and the slower than forecast roll out of the NDIS) spending, especially the robodebt harassment of social welfare recipients by Centrelink has delivered lower-than-forecast spending.

[Think Scott Morrison is a good treasurer? Here are 40 reasons you are wrong]

So let’s call it the China, apartment boom and robo-debt result.

But don’t forget, the government thinks it’s getting too much revenue from company tax, and wants to slash tax rates, despite the dearth of evidence the current rate is harming the economy. In fact, given the strengthening state of the economy, we appear to be doing surprisingly well for a country with what is incorrectly claimed to be an internationally uncompetitive tax rate.

And there remains the thorny problem of stagnant wages. The 2016-17 budget forecast wages growth of 2.5%, which workers would have given their eye teeth for, given they averaged 1.9% instead; income tax receipts came in around $3 billion below forecasts — and that’s despite the strong employment growth of 2017. If the oft-forecast rise in wages doesn’t materialise yet again (this year’s budget plumped for 2.5% as well) then expect tax receipts to cop another hit.

Oh, I thought that maybe some of that interesting figure might have been AusGov revenue from LPG, which left the country begging their bankers, to be able to heat home and water in winter, aircon for those who can afford it, in summer! Maybe they could subsidise that part of our deficit from the fuel tax?

How much did not spending “projected spending” do for that bottom line?

Wow, another win to the COALition!
They’re kicking goals all over the place aren’t they?
This one, Mal at the High Court, on the jobs front, getting postal surveys through with calm demeanor, Michaelia nobbling the unions.
No wonder they’re winning on the opinion poll scoreboard.

How does “the robodebt harassment of social welfare recipients by Centrelink has delivered lower-than-forecast spending.” do that?
Scaring off claimants? Recouping overpayments?