When we in the West refer to the “Assad regime,” we are not only discussing one particular dictator, but indulging a simplistic reading of the Arab world, writes Ruby Hamad

Most of us should be familiar with how the implications of words change depending on who is using them, as radio host Jon Faine discovered the hard way earlier this week.

Anyone following my social media would be aware of my vehement distaste for the word “regime.” Politically speaking, a “regime” is an authoritarian government, and this certainly applies to many in the Middle East, including that of Syria’s Ba’athist government headed by President Bashar al-Assad.

Although used freely by Syrians and Arabs in general, and with good reason, it’s a term I balk at when used in an English-language context because it can mean something very different.

When Syrians refer to the “Assad regime,” they are using language to express dissatisfaction with a particular government, and with authoritarianism itself. When English speakers use it, however, it quickly becomes a case of an out group – whether wittingly or unwittingly –   deligitimising an entire region and its people.

Palestinian-American academic Edward Said’s indictment of the Western world’s imagination of the Arab and Muslim world, where the former regards the latter as uniquely violent, inhabited by irrational, animalistic actors who engage in violence for its own sake simply because that’s what their savagery programs them to do, still holds true today.

The word “regime” subtly plays into this perception of the mindless savagery of the Arab world.

In the wake of the chemical attack on the rebel-held town of Khan Sheikoun, in Syria’s Idlib province last April, the consensus that quickly emerged regarding why the Syrian government would stage an attack that served no strategic purpose is perhaps best summed up by the words of one commercial Australian radio host who asked, “Well, he’s just a bloodthirsty dictator isn’t he?”

None of this is to say the Syrian government is not behind the gas attack, indeed the subsequent UN report also pointed to Assad. It is not so much the act of blame itself but the rhetoric and reasoning behind it that needs to be unpacked.

When we in the West refer to the “Assad regime,” we are not really only discussing this one particular dictator, but are indulging the Western world’s limited understanding of the Arab world in order to ascribe motives based not on logic or evidence, but on the trope of the savage Arab.

While it may be easy to let this slide because Assad is an unsympathetic character, and many Arabs and other Muslims themselves have enthusiastically adopted this emotionally charged but ultimately self-defeating rhetoric in their desperation to see Assad fall, but Arabs who give in to this temptation now will almost certainly see it used against them in the future because this is how the West justifies its ongoing incursions in the Middle East.

US President Trump did not bother waiting for an investigation but quickly used the Khan Sheikoun attack as a pretext to bomb a Syrian air base, killing four Syrian soldiers. Former Trump administration spokesman Sean Spicer rationalised this impulsivity on the basis the Syrian government had essentially committed the worst crime in history because, “Even Hitler wasn’t using chemical weapons…on his own people. ”

Aside from the obvious undermining of the Holocaust, there is another clear problem with Spicer’s “his own people” rhetoric. The Western world has instigated many wars, killed and maimed many Arab innocents (and others of course) with bombs, drones, white phosphorous, and more, yet this this is rendered immaterial because Western governments don’t do it to “their own people.”

First, this is untrue. The US tested Agent Orange on members of its own military, and experimented with syphilis on its own black male population.

Second, what the US is really saying here is, since they are not doing this specific heinous thing at this particular moment in time, then they are justified in claiming it as the new moral line that cannot be crossed.

For this red line to gain currency, there has to be an implicit understanding that it’s not the use of gas or bombs or any other weapon of mass destruction that is the problem, nor is it how many people they are used against.

Rather, the line between humanitarian and immoral is, “To whom do these victims belong?”

Now that we have established Arab “regimes” as the most morally depraved governments in the entire world, the natural corollary is that they must be quickly and decisively dealt with.

And how do we deal with them? By killing and maiming yet more Arabs with Western bombs and drone strikes. The cruel contradiction is almost genius.

With the moral rightness firmly established, Western actions are justified and nothing anyone does is ever going to be as bad as Assad – until the west decides on whatever the next red line is.

Cue all eyes on North Korea.

Again, this is not to sanitise the actions of Assad or any other government for whom the terms apply. We must be able to hold more than one unpalatable truth at once. We do not need to call a government a “regime” in order to condemn its actions. Using military weapons against civilians should be considered a moral outrage, no matter where those civilians live or who they “belong” to.

But these terms serve a deeper purpose; they dehumanise the entire Arab and Muslim world, cementing it as the West’s diametric opposite. The actors themselves are interchangeable – even The Daily Telegraph took a brief hiatus from alarming the public over Muslims to rail against Assad for “killing some of his own citizens” – who happen to be among the very Muslims they themselves despise.

The truth is, it doesn’t actually matter who, specifically, the target of Western rhetoric is. The underlying aim is to highlight again and again how barbaric, how utterly unlike the West, the Muslim and Arab world is. And so, anything done to them by us is not only justified, but somehow humanitarian.

Sure enough, three days after Spicer’s Hitler gaffe, Trump dropped the “mother of all bombs” on an ISIS compound in Afghanistan putting up to 95,000 Afghans at risk.

This “mother” was enthusiastically greeted by American journalists and commentators across the political spectrum, with Tweets along the lines of, “It’s about time,” and “Trump really became president with this giant bomb.”

Language is powerful. It is how we separate “good” violence from the “bad,” and how we learn to accept the unacceptable. We live, as ever, in uncertain times, but one thing not in doubt is that the works of Edward Said won’t be losing their relevance any time soon. 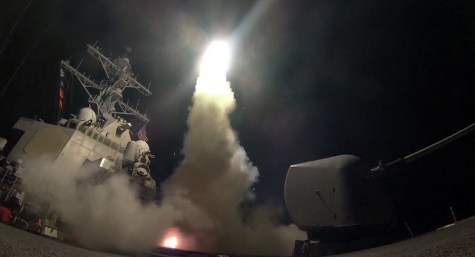 Inside the WikiLeaks meeting with Assad: Syrian morale rising, he insists

The word ‘regime’ isn’t used to slur Arabs. The western media speaks all the time of the Putin regime, the North Korean regime, the Iranian regime, etc. What these ‘regimes’ all have in common isn’t a culture of savagery, it’s an alleged lack of democratic legitimacy. That’s the accusation implied by denying them the polite monikers of ‘government’ or ‘administration’, as in Turnbull government or Trump administration.

(Saying this isn’t to claim that Orientalism doesn’t exist, just that your claim of finding a perfect example of it in the media’s use of the expression ‘Syrian regime’ is questionable. If that expression does harbour the slur of savagery, I’d say it’s on account of containing the word ‘Syrian’, marking it as being of the Middle East, where Arabs are to be found.)

And just one other thing. Khan Sheikhoun almost certainly wasn’t a government-ordered sarin gas attack, but was most likely an inadvertent release of industrial chemicals from a warehouse hit by a conventional bomb or missile. Not the best example of savagery to make your case. Indiscriminate barrel bombing of civilian neighbourhoods to instill terror would have worked better. Indeed, buying into that ‘Syrian government chemical weapons attack narrative’ suggests you’ve bought into the very sort of media misdirection you decry.

Now it’s “the rogue state.” Not a day goes past without this propaganda epithet being applied by the ABC and most other “news” outlets to the admittedly unpleasant ruling authorities in North Korea. And of course it’s invariably a “regime.”

Interesting. The word ‘regime’ is defined in the dictionary as ‘a government, especially an authoritarian one.’ It’s not just a tag to apply to Governments we don’t like. We don’t normally talk about the Trump ‘regime’, for example. I don’t think it’s specifically about the Arab world. We tend to apply it to countries that are viewed as ‘other’, outside our ‘club’.

The U.S.. U.K. and Australian best friend Saudi Arabia an outstanding middle eastern freedom loving democracy (no not a regime or rogue state) has in the last few days for the first time allowed women to drive cars.

I kept reading in the hope that there was something apart from verbiage in this piece.
Invoking Said is unfortunate given the way his work deteriorated in his final decades so that his excoriation of Orientalism negated his entire life’s scholarship.
The constant use of “Arab and Muslim world” as if they are synonymous didn’t miss a beat with the quick skip to Afghanistan – only a shame that Iran, Turkey & Kurdistan couldn’t be shoe-horned into the victimology.