Tweets are about to become twice as insufferable. And other media tidbits of the day.

Today in Media Files, the fallout from the ABC’s 7.30 story about Seven’s sacking of a cadet journalist continues, and tweets are getting longer.

Seven’s cadet firing fallout continues. The fallout from the ABC’s 7.30 story on Monday about the Seven Network’s treatment of a cadet journalist continues. Seven board member Jeff Kennett accused the broadcaster on Twitter of failing to go to the network for comment on the story, which has been branded a “lie” by host Leigh Sales, rejected by reporter Louise Milligan and contradicted by a statement from the network included in the report. Kennett has this morning apologised to Milligan, saying his tweet about having no contact was incorrect. On the program’s online posting of last night’s follow-up story, 7.30 has included a lengthy statement from Seven that said allegations aired hadn’t been put to the network.

Twitter trials longer tweets. Twitter has announced it’s testing a higher character limit with some users. The social media platform currently has a character limit of 140 characters for each tweet, but is currently experimenting with allowing some users to use twice that. In a blog post about the change, product manager Aliza Rosen and senior software engineer Ikuhiro Ihara said Twitter would still be about brevity:

“It’s what makes it such a great way to see what’s happening. Tweets get right to the point with the information or thoughts that matters. That is something we will never change. We understand since many of you have been Tweeting for years, there may be an emotional attachment to 140 characters — we felt it, too. But we tried this, saw the power of what it will do, and fell in love with this new, still brief, constraint.”

The revolving door. Mamamia‘s managing director Kylie Rogers will move to the AFL as its commercial director. Rogers has been at the women’s website for three years, and had previously worked at Ten.

Facebook sacks the NFL. Facebook has done a new deal with the US’ National Football League that will include game recaps, highlights and recurring series on the social media giant’s Watch platform. It will be available to US viewers. Amazon recently won the rights to stream Thursday night football games over reported bids from Facebook, Twitter and YouTube.

Front page(s) of the day. Anthony Weiner is the gift that keeps giving to headline writers in the US. The former congressman pleaded guilty to sexting a teenage girl and was sentenced to 21 months in jail yesterday. Weiner resigned in 2011 after a lewd picture was posted from his Twitter account. He then ran for New York mayor in 2013 in a campaign marred by more revelations of sexual text message conversations. 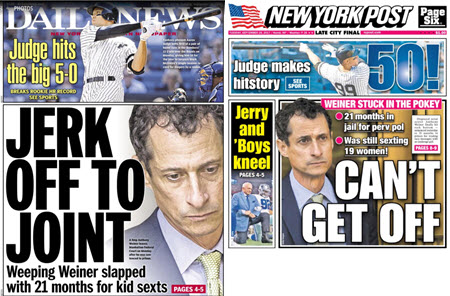 Glenn Dyer’s TV Ratings. The Block wins. Nine wins. Nine News does well, as does A Current Affair. End of story. On to tonight for Gruen on the ABC, The Block, the final of The Good Fight on SBS, Doctor Doctor on Nine and of course the second coming of Sophie Monk on Ten (AKA The Bachelorette).

800 Words solid performance in the regions helped the program nationally — it could only manage 587,000 in the metros. That tells us how far the program has slid in the metros — the regional performance was proportionately far stronger (and that is also what is happening to Home and Away). On Sunday night a very solid audience figure for Little Big Shots boosted its national audience past 1.6 million (1.02 million in the metros and 631,000 in the regions). The question is whether the solid support from regional viewers be enough to convince Seven to return these shows in 2018, or axe them and start again, or makes changes? — Read the rest on the Crikey website

Bureau of Regret: when spammers attack

QED. There is little if any resemblance between the story Louise Milligan presented last night and the very measured Channel Seven description of events here. The ‘backlash’ against Channel Seven of which the headline here speaks is predicated entirely on the presumption that the first version is unimpeachably true. Every single public comment I’ve read on this case simply takes as its start point the acceptance of everything Team Taueber as gospel. There is plenty of reason to doubt it, starting with the timeline, the mutual settlement, and the massive disparity b/w the two parties’ description of the investigation process, the level of representation, and the outcome.

Am I the only one who thinks this smells, very bad?