The space age arrives in the Northern Territory, and other media tidbits of the day.

Today in Media Files, veteran TV executive David Lyle has died at his home in Los Angeles, and the ABC’s Matt Brown has won the Lowy Institute’s media award.

Vale David Lyle. Veteran Australian TV executive David Lyle has died, aged 67, after a long battle with cancer. He’d worked at ABC, Ten and then Nine in Australia before moving to the US where he held senior producing roles at Fremantle Media, Fox and National Geographic. NPACT general manager John Ford told Variety Lyle was a “rare breed”:

“David Lyle was a rare breed, in our industry and in the world. A true bon vivant, he brought light and life into every room, along with a passion for the creatives of this business. We will all miss David’s maverick mettle, along with his vitality, brilliant insights and humor.”

Foreign affairs gong for the ABC. The ABC’s Middle East correspondent Matt Brown has won the Lowy Institute’s media award for his reporting on Islamic State. The award recognises excellence in foreign affairs reporting. Brown tweeted he was honoured to win the award, and gave a shoutout to ABC cameraman Aaron Hollett who’s based in the Middle East too and has worked with Brown on stories for the 7pm bulletins, 7.30 and 4 Corners. Bret Stephens, a controversial New York Times columnist, gave the address at the award ceremony on Saturday.

Matthew Abraham pens column for new role. Former ABC Adelaide breakfast radio presenter Matthew Abraham has reappeared in the South Australian media after his short retirement from the media in the Sunday Mail. Abraham left the ABC in July after presenting his show with David Bevan for 15 years, and yesterday made his debut as a new Mail columnist. Bevan has now moved to the mornings slot, and Ali Clarke is presenting the breakfast program.

Bodyguard for BBC reporter. The BBC’s political editor has been given a bodyguard to cover the Labour conference in the UK because of threats she’s been receiving. Laura Kuenssberg is the BBC’s first female political editor and The Sun reports that she’s been frequently targeted with sexist abuse online claiming she’s biased against Labour leader Jeremy Corbyn. 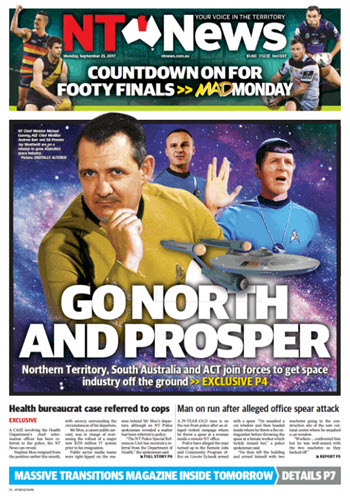 Glenn Dyer’s TV Ratings. Nine’s night — owned it thanks to The Block. Seven struggled and Ten was crushed — a main channel share on a Sunday night in prime time of just 7.8%. CBS can’t come too early.

Nine is guilty of oversell in the promos for last night’s 60 Minutes and the interview with Cassie Sainsbury. Surely there should be a law protecting the naive from themselves when confronted with the media. It wasn’t one of Liam Bartlett’s finest hours, or 60 Minutes, even though it rated well. Ratings click bait which added nothing to our understanding of the story except to confirm that Cassie Sainsbury is…a little confused. Her excuse about her phone (she can’t unlock it) is the same as “dog ate my homework”. 60 Minutes averaged 1.45 million people; helped by having The Block — 1.99 million — as the lead-in.

Little Big Shots on Seven continues to fade — mostly in metro markets (1.02 million people). The 631,000 viewers audience in the regions is yet another example of regional viewers keeping Seven programs alive — Home and Away, for instance, is another. ABC TV’s Insiders with 522,000 national viewers was again the most watched TV program in mornings (and for the week). Intelligent political discussion out rates sports dissection on Nine and Seven (and the ABC). In the regions Little Big Shots was tops with 631,000, followed by The Block with 604,000, Seven News with 567,000, Nine News, 447,000 and 60 Minutes was fifth with 417,000. — Read the rest on the Crikey

Vale Lateline, a stalwart of ABC news and current affairs

Fairfax gets the best of both worlds with the ABC