No bliss in Esso. The effects of “green policies” on workers have been of such great concern to our politicians — arguing that the Hazelwood power station should not be closed, former prime minister Tony Abbott talked about the “climate induced fiddling” that has “damaged our standard of living and it’s destroyed thousands of jobs”, and the Coalition has frequently accused “green ideology” of doing the same. A tipster has got in contact to remind us it’s not just green dreaming that puts jobs and energy security at risk.  Back in June, up to 200 maintenance workers at Esso’s Longford gas plant (in what looks like a play by play repeat of the Carlton & United Breweries dispute) were “offered a take it or leave it Enterprise Agreement” which would result in pay cuts of up 30% as well as the loss of “all their previously held entitlements”. Crikey understands UGL — the contractor who engages the workers — did this through creating a subsidiary company and offering workers their jobs back through that, thus taking the previous agreement out of the equation.

Despite getting some local media coverage at the time, the dispute has gotten very little attention nationwide (certainly nothing compared to Hazelwood) and Federal MP for Gippsland Darren Chester has been oddly quiet on the subject.

Start fixing your CV … if you dare. There’s challenging jobs, and then there’s challenging jobs. The Australian Press Council is recruiting for a new chair of its board after the resignation of David Weisbrot earlier this year. Weisbrot stepped down from the gig he had held since 2015 after a sustained period of criticism from The Australian over the appointment Carla McGrath to the APC board — McGrath is deputy chair of activist group GetUp. The role is being advertised by headhunters Odgers Berndtson and says:

“In a period of significant change, the Australian Press Council must adapt to new challenges and opportunities. It is responsible for ensuring effective complaints-handling, developing and refining standards of reporting in newspapers, magazines and online media outlets and advocating for freedom of speech, freedom of the press and responsible journalism.

Adapting to the changing media industry and regulatory landscape, upholding public expectations of high standards of practice, steadily expanding membership across all forms of mastheads and enhancing capabilities of the Council form key elements of the organisation’s strategic plan.

The Council now seeks a new Chair who will provide strategic leadership in response to these  challenges and who will build upon the significant achievements of the previous Chair, Professor David Weisbrot AM”

It doesn’t mention anything about taking the heat of campaigns from member newspapers, but maybe that will come up in the interview.

Mansplaining at women’s conference. Speaking of media bodies, the journo’s union MEAA is running its first ever Women in Media conference on the Gold Coast in late October. The program was released this week and eyebrows were raised at one of the panels — titled “Men in Media,” with News Corp’s Joe Hildebrand, Peter Tonagh CEO at Foxtel and SBS boss Michael Ebeid. The panel promises:

“Some of the nation’s top MIM (men in media) share their strategies on how to boost gender equality in the workforce. They’re armed with personal anecdotes and ideas on how best to break down the barriers for women in the workplace.” 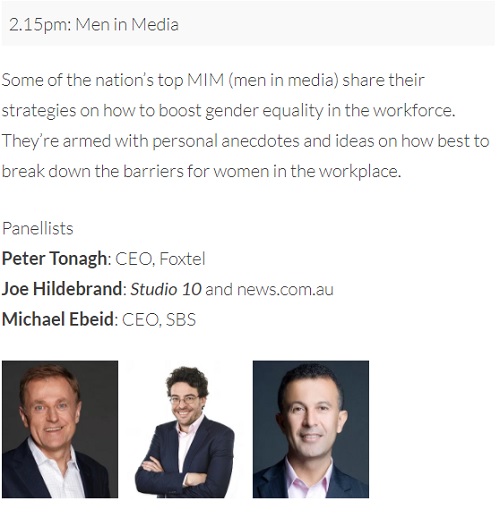 It’s not hard to find a conference with an all-male panel, but one called Women in Media is a stretch. Perhaps women also have insight into “how best to break down the barriers for women in the workplace”? We asked the conference organisers why there was an all male panel and were told by chair of Women in Media Queensland Kathy McLeish:

“We’re proud of the extraordinary group of speakers we have put together for the first Women in Media conference. We will be hearing from both men and women at our upcoming conference, because we believe we need to include both genders in the conversation about gender equality.

The Women in Media conference themed ‘Media is Changing – You can too!’ will give journalists and media professionals tools to forge ahead in a changing media landscape.”

Nationals emergency: watch this video. Australia and New Zealand have the highest rates of melanoma in the world and The Nationals have decided to take part in a campaign that could leave you feeling a bit hot under the collar. As part of the Melanoma Institute of Australia’s plan to make Australians a bit more sunsmart, the Nats have enlisted the help of Tom Jones and encouraged us to “Leave your hat on” with some saucy dance moves. Nationals leader and Deputy PM Barnaby Joyce says wearing a hat is important to prevent skin cancer on your face (and he would know, having had some cancers treated a year ago). However the real star is member for Gippsland Darren Chester — who leaves his hat on, but not much else. 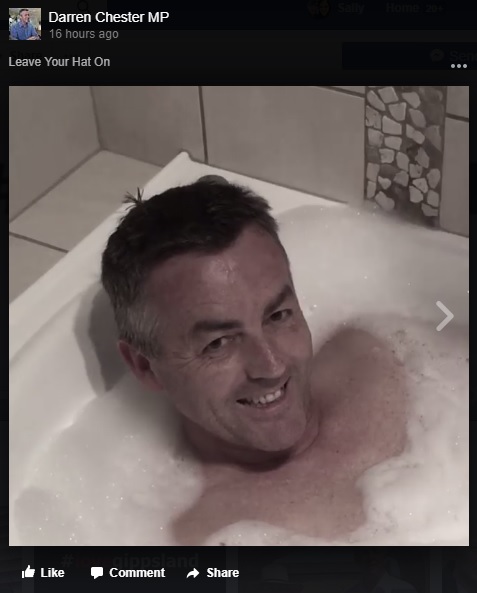 Darren Chester’s latest contribution to our nation is to announce the Melbourne-Brisbane inland railroad is to cross the Condamine floodplain – contrary to advice from local farmers who understand the area’s topography. This Turnbull government decision is truly innovative….& way too agile.
The Coalition keep the laughs coming….