More tired attacks on universities and cheap tit-for-tat undermine the integrity of free speech in Australia.

Liberals against liberalism update: in the same week that the Turnbull government destroyed any chance of amending 18C/18D — by drafting and passing shonky “vilification” legislation related to the plebiscite, that simply confirmed that all major parties now treat speech as an implicitly violent act, i.e. not as speech at all — another minister has confirmed that the Liberal Party is getting out of the business of liberalism altogether.

Simon Birmingham, the engagingly geeky @Birmo, decided to take a piece of the action when Daily Tele journalist and Cold War cosplay re-enactor Kylar Loussikian had another pass at Sydney Uni global politics academic Tim Anderson. Anderson is a dedicated anti-imperialist (and a little too enthusiastic for certain anti-imperialist regimes, for some of us), and Loussikian attacked Anderson for criticising the record of both Trump and Obama in bombing the hell out of Syria and arming “moderate” jihadis.

In the teeth of escalating tensions between North Korea and the US and allies, Anderson took a study group to North Korea, and tweeted back some pictures of Pyongyang citizens in everyday life. Once again, a little too Moscow ’30s tourism for my taste — “your children’s accordions put our Western children’s accordions to shame!” — and Pyongyang is privileged compared to the rest of the country, but good to see them as people living lives, not thousand-columned regiments marching in front of missiles. Not for Loussikian, who had SHOCKING revelations that Anderson’s tour had visited Kim Il-sung’s “palace”/mausoleum and the demilitarised zone (“Dr Andeeersen, we would like to put a missile base in your ‘cultural studies’ department”). I’ve been there too — as has anyone who takes a commercial guided tour of North Korea. It’s a beat-up.

[Rundle: US and North Korea are more dangerous than fiction]

It’s also an attack on the principle of the university and free inquiry with Loussikian thundering, “Yet the university is refusing to take action against Dr Anderson, who is paid up to $130,000 to teach international politics. because [sic] ‘staff can spend their leave however they wish’.”

Good old Birmo was only too happy to jump in:

“It’s one thing to foster debate at university but you cross the line when you back an evil dictatorship that murders its citizens and is posing an increasing threat to global security. Mr Anderson has shown time and time again his extreme views should not be given a platform to shape the minds of students.”

Well, yes, we want our universities shaping minds correctly, i.e. shaped so they condemn the shaping of minds by regimes, such as North Korea, which know nothing of our free thought traditions. The standard hypocrisy, in other words, and with obvious political intent. But I do wonder if such people understand or care that every time they rant on like this, and suggest that universities or the ABC should be organs of social shaping, they simply mirror and reinforce the assumptions by which the things they despise — 18C, Safe Schools, etc, etc — operate, the assumption that speech is wholly material, not discursive and dialogic.

[What Ayaan Hirsi Ali gets right about freedom of speech]

There’s not much difference between good old Birmo trying to shut down Anderson, and students trying to no-platform right-wing speakers on campus. The cultural left wins out of this every time, because it is very interested in placing ever-stricter limits on speech. The right will never win on this territory — the public is much happier to support restrictions on unpopular opinions about race, sex/gender, sexuality, etc, than they are about patriotism and religion.

For many people now, it is “natural” to prefer “safety” and “non-harm”, to free speech on such matters. The refrain “why would you even want the right to be offensive?” has become the standard social setting. But regarding conservative values — the nation, tradition, religion — the “high” and mass culture loves transgression and wants more of it. Try and ban people like Anderson, and the academics who will find it increasingly difficult to speak are those who want to question for example, overly moralising narratives of European imperialism, or advance arguments about biological hardwired sexual differences, or any other of a wide number of topics.

Meanwhile, the opinions of the current Republican President as regards Assad and the Syrian rebels are rather closer to those of a dissident anti-imperialist academic, than they are to the bristling think tank/neocon/News Corp establishment, busy trying to work out if they can arm the “moderate” wing of al-Qaeda, and sell them to the Western public as freedom fighters 4.0 (“Al-Homs, pictured with the heads of nine children, is the George Washington of the struggle for Syria’s soul …”). The final act? Tweet-snark, whereby Loussikian rubbishes Anderson for taking 13 days to put up a graphic filleting Loussikian’s article. That is one recess fight away from Madison not being included on Alex’s farewell collage because of what, etc, etc.

In the midst of all this, would it be possible for those who profess a belief in free speech and the freedom of the university, to not wreck it for cheap shots, nuclear-armed or otherwise? 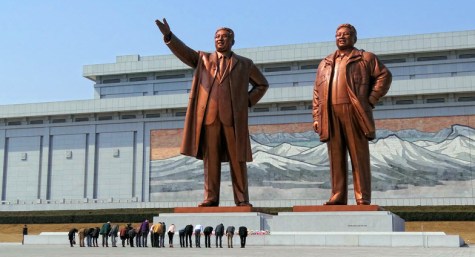 If the Libs are no longer supporting free speech, they could at least try “supply and demand”. If you don’t like Anderson, it’s not as if there aren’t dozens of other universities teaching international politics, bound to be someone that Birmo approves of somewhere. Even more worrying is his “shape the minds of students” line- poor susceptible little kiddies. It’s university, minister, not school, their minds should be able to cope with some unorthodox views.

I’m becoming increasingly pessimistic about our commitment to freedom of expression – the right have only ever been disingenuous in their support for it, as this government proves every other day now; while the left (particularly the younger identitarian left) seem to consider the entire principle old hat, just a way of protecting the privileged position of straight white men, etc. Right-libertarians like the IPA are at least somewhat consistent on this front, but the rest of their worldview is so incoherent and ridiculous that they only serve to tarnish public perception of the concept further.

This way lies barbarism, I fear.

I understand why the alleged snowflake-y trend of ‘no platforming’ and ‘trigger warnings’ gives people the vapours – it does look and sound like a kind of closed-mindedness to inquiry that strikes at the heart of what universities are supposed to be about: a free-thinking zone, delivering challenging ideas etc. etc. Or should I say what universities USED to be about. Because it strikes me that all this is the consequence of a ‘user pays’ model of education: we now have had at least twenty-years of push towards university education as a choice-driven consumer product. And once you go down the path of commodifying education, you can’t really be surprised that the “customer” starts to treat it like any other product – demanding that their individual preferences and tastes are specifically accommodated in the marketplace.

I hope your speech ever remains free, Guy! From Russian accordions to Madison being unfriended – a delight to read, as always.

I can’t shake the sneaking suspicion that John Howard was the real Hilton bomber.