The ABC is given the cold shoulder on the Gold Coast, and Fox News faces even more legal strife.

Today in Media Files, the ABC has been cut out of a press conference in response to Monday night’s Four Corners program, and Herald Sun columnist Luke Dennehy is leaving the paper.

ABC cut out over Four Corners investigation. The ABC has been cut out of a press conference with Gold Coast Mayor Tom Tate after the Four Corners program on Monday night investigated political donations to councillors in the city. A press conference was scheduled for the foyer of the council offices, but was moved upstairs to Tate’s office, where all cameras except the ABC’s were allowed. The ABC reports that Tate said the public broadcaster wasn’t allowed in because he was considering legal action over the program. 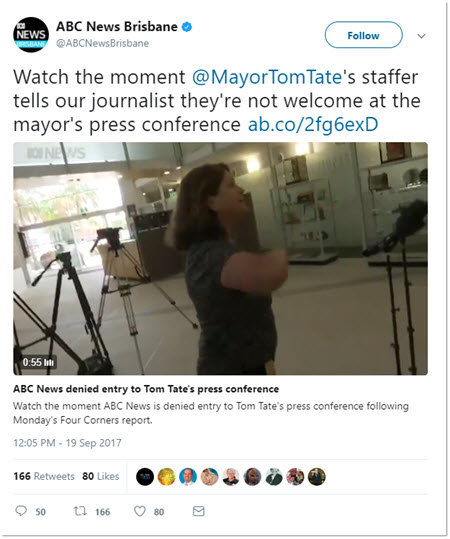 Dennehy exits. Herald Sun Confidential columnist and entertainment reporter Luke Dennehy is leaving the paper with a voluntary redundancy. Announcing the news on Twitter yesterday, Dennehy said it had “been a dream come true to work here for the best part of 20 years”. He said he would take a few months off after he finished up at the end of the month, but will stay in the industry. 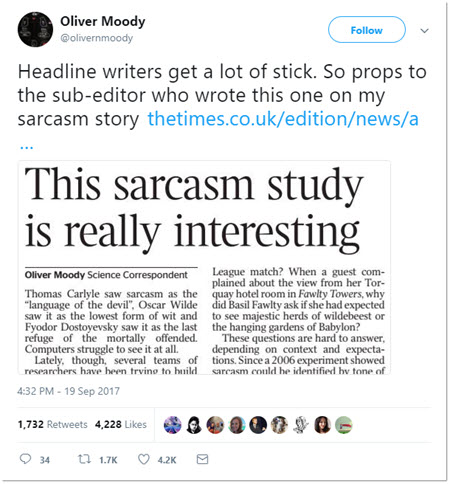 Fox News’ legal troubles. Fox News is facing yet another sexual harassment case, with a former on-air guest alleging she was blacklisted and defamed after accusing an anchor of rape and assault. Lawyers for Scottie Neil Hughes filed the suit in a federal court in New York, following earlier allegations that she was raped and assaulted by Fox Business Network anchor Charles Payne, on whose show she often appeared. Hughes also claims that after making a formal complaint to a law firm retained by Fox News, Fox News leaked her name to the media and disseminated emails that suggested she and Payne had a consensual relationship.

Besides Fox News and Payne, the suit’s other defendants include Fox News general counsel Dianne Brandi and spokeswoman Irena Briganti, and the cable channel’s parent company, 21st Century Fox. Through his lawyer, Payne denied the allegations. Payne was re-instated earlier this month after being suspended in the wake of Neil Hughes’ original claims.

Fox is also still facing a defamation case tied to the discredited story about murdered Democratic staffer Seth Rich. The network wants to dismiss a suit from private investigator and paid contributor Rod Wheeler, who says a Fox reporter made up quotes attributed to him in an online story on the murder of Rich. The story claimed that Rich had been killed because he had been communicating with WikiLeaks. Wheeler, who is black, also claims the network discriminated against him on the basis of his race.

21st Century Fox has spent millions of dollars on employing a law firm to handle and investigate these complaints, including settlements and costs associated with sacking Bill O’Reilly and Roger Ailes. Earlier this month, Fox News host Eric Bolling was sacked after 14 people confirmed to Huffing Post that Bolling had sent lewd pictures to them.

O’Reilly re-emerged in the public eye on the NBC’s Today show on Tuesday to claim that he never mistreated anyone in his life and that his sacking from Fox “was a hit job, a political and financial hit job”. — Glenn Dyer

Glenn Dyer’s TV Ratings. Yet again, The Block’s night with 1.80 million national viewers and 1.24 million in the metros. End of story, onto tonight. Australian Survivor on Ten was again weak — 743,000 nationally. Seven hung in — the 6 to 7 News programs were its best performers with 1.60 million and 1.48 million viewers respectively. 800 Words managed 1.07 million viewers nationally.

On Sky News, Alan Jones’ special guest, Tony Abbott, was softball questioned by his dear friend Peta Credlin. This love fest of like minded sorts was watched by 50,000 people and was the 8th most watched program on Pay TV last night. The sports chat show, AFL 360, was tops, with 83,000 people, followed by the Matildas playing Brazil on Fox Sports with 82,000 — these were the top two programs on Foxtel last night. The Matildas game averaged 241,000 national viewers on ABC 2 last night.

“Confess to a conflict of interest and vote anyway”? WTF?
“Piggy” Tate and “Donor (A conflict of interest only exists in the mind)” Gates – who’d know we’d had a Fitzgerald Inquiry?
But it’s “legal” (unlike in other “give a shit” states with an eye to probity) – so they do this?
But what is this half-arsed Labor government going to do about that -that should have been done years ago – but wasn’t because “those same each-way betting donors are ‘sharing the $love’ to keep in sweet with both sides(?)”?
Wait ’til after the next election (’til after they get a report into the bleeding obvious?) to promise to do “something”? …. When it might be too late and it will be up to a Limited News Party/PHON coalition to do something – another wasted opportunity?

The ABC being excluded but other journalists being welcome to attend Tate’s press conference demonstrates how innocuous the mayor perceives those other media organisations to be. Clearly, he has no concerns of what they may report…. or under-report.

As usual, the ABC can be relied upon to be fearless in the public interest having garnered the facts. I watched Four Corners closely, the report appeared well researched and fact-based. Tate won’t sue, betcha.

Just a “Moonlight State of mind”?
Eventually the Curry or Maul might send out a “Dispensable Dickie”, just in case – to be there if it blows up – again?
…. If it doesn’t then “They were expendable”?
And what does it tell you about the sort of “journalists” who abandoned the ABC, to attend “Piggy’s Court”?
Screw any “dedicated to true news” rhetoric : it’s deja vu all over again?
….. I’m waiting for Luke Smith’s deals to be flushed into the sunlight?

I wait for the day when the gathered journalists and camera handlers/ photographers tell the PR flack – “it’s all or none”. In other words, if the deadshit mayor or whoever it is says I don’t want to see them (ABC for example) – then all of them should piss off.