‘Clean coal’ is a lie straight out of the Orwellian playbook

Despite the dire warning of climate scientists, underpinned by the current spate of extreme weather events around the world, the government appears to be bent on promoting coal-fired power generation, writes Earth and Paleo-climate scientist Andrew Glikson.

“Clean coal” constitutes a process whereby power-generating efficiency is increased by about 30% and CO2 emission is reduced by approximately 30%. For conventional coal-fired power generation, heat from coal burned at a temperature of around 700 degrees Celsius produces steam, which rotates a turbine. A CoolGen’s plant is totally different as it roasts coal at above 1300 degrees while simultaneously blowing oxygen over it in order to convert the solid fuel into a gas. The system can drastically cut the discharge of CO2 because it uses gas from the roasted coal to generate power instead of burning the rock.

The concept of creating commercially viable ways of stopping the carbon emissions from coal-fired electricity plants has been the holy grail of the fossil fuel industry for decades. The cost of building the required infrastructure would be enormous and the time periods involved may be too long to prevent the risk, identified by the consensus of expert scientists, of potentially catastrophic climate change.

The production of “clean coal” is not problem-free. For example, Southern Co’s dream of a fully functional “clean coal” power plant is facing setbacks. The company is trying to build the first power plant of its kind able to burn coal and capture about 65% of the carbon-dioxide emissions. But the project has faced repeated delays and cost overruns. Since last year, as the facility began to test the equipment, it has experienced leaks and other problems that have pushed back when the facility would be fully operational.

Even if the problems associated with “clean coal” are overcome, saving about one third of emissions from coal, this would hardly retard the advent of dangerous climate change. Global reserves of coal, if exploited, would increase emissions by many tens, to more than a hundred, parts per million (see Figure 1), which is enough to lead to catastrophic melting of the Greenland ice sheet, a large part of the Antarctic ice sheet and a rise of sea level on the scale of many metres. There are sufficient coal, oil, gas and unconventional sources of fossil fuel (see Figure 1) to raise global temperature by several degrees Celsius, well above the threshold of the great ice sheets. 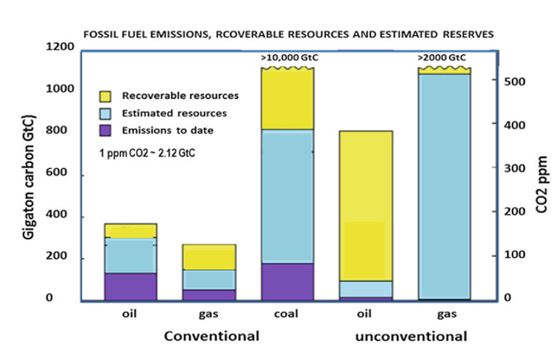 Global CO2 emissions for 2016 were 36.4 GtCO2 (billion ton CO2). Australia’s contribution to such developments is not minor.

Compare with emissions per capita in other major emitting countries:

Figure 2. CO2 emissions per capita from fossil-fuel use and cement production in the top five emitting countries and European Union.

Despite the dire warning of climate scientists, underpinned by the current spate of extreme weather events around the world, the government appears to be bent on promoting coal-fired power generation.

Claims that carbon capture and storage might be able to “cut emissions from fossil fuels by up to 90 per cent” are difficult to support. There are 17 successful projects across the globe, storing about 30 million tons of carbon dioxide a year. This is about 1000 times less than the global emission of CO2 — 36400 MtCO2 (million ton CO2).

It is all reminiscent of the earlier promise of safe storage of nuclear high radiation nuclear waste, RADWASTE, which remained unfulfilled due to high costs and other problems:

“We are as humans conducting a massive science experiment with this planet. It’s the only planet we’ve got…. We know that the consequences of unchecked global warming would be catastrophic. We know that extreme weather events are occurring with greater and greater frequency and while it is never possible to point to one drought or one storm or one flood and say that particular incident is caused by global warming, we know that these trends are entirely consistent with the climate change forecasts with the climate models that the scientists are relying on…. We as a human species have a deep and abiding obligation to this planet and to the generations that will come after us.”

However, on June 21, 2017, he declared the government was open to using “clean coal” technology to replace existing generators as he emphasised the need to prevent price rises and power outages across the national electricity market: “I’ve said in the past that I think that, as Australia is the largest seaborne exporter of coal, it would be good if we had a state-of-the-art, clean-coal power station in Australia.”

Not that any government in the world is listening to what climate science is saying. Global warming due to human-made gases, mainly CO2, is already higher than 1.0 degree Celsius and 1.5 degrees Celsius over the continents. Deleterious climate impacts and extreme weather events are growing worldwide, including as recent mega-floods and wild fires demonstrate.

More warming is in the pipeline. The Earth is out of energy balance, with absorbed solar energy exceeding planetary heat radiation. Maintaining a climate that resembles that of the last 8000 years (the Holocene), the world of stable shorelines in which civilisation developed, requires rapidly reducing fossil fuel CO2 emissions as well as major CO2 sequestration efforts such as using sea grass plantations, biochar and chemical sequestration methods.

As George Orwell’s Newspeak principles indicate, changing the language alters peoples’ way of thinking. The clever switch from the terms “climate change” and “global warming” to “energy security” and “power blackouts” engenders fear in people regarding the immediate future at the expense of mitigation measures in protection of the planetary biosphere. However, as stated by Hans Joachim Schellnhuber, chief climate adviser to the German government: “We’re simply talking about the very life support system of this planet.

And on Friday morning, Patrica Karvelas on RN conducted an ‘interview’ with a Benjamin from the World Coal Association. She didn’t challenge him on his claims about “clean coal” or carbon capture and storage but she did discuss his meeting with Turnbull and wanted to know if he had “the government on side.” And a few months ago she gave Malcolm Roberts free reign on her Drive show to push his conspiracy theories. I wonder if the ABC give the tobacco lobby the same sort of support and encouragement back in the 1980s and 1990s.

Indeed Pjp – Evil forces at work within the ABC; false balance everywhere and limited opportunities for feedback from the seriously disgruntled ex-fans like myself….thank you Crikey, Guardian, and New Matilda for providing the incisive and honest journalism we once took for granted from the ABC.

(gasp) You mean one of the hacks they brought in from the Strayan gave some wingnuts a warm fuzzy?
I’m shocked! Shocked I tell you!

This is the reality about Liddell, the 50 year old power station whose life the morons in Canberra want to extend. From The Saturday paper.
The analogy most commonly used about Liddell is that it’s like an old car that has reached the point where the cost of repairs is greater than its worth. It’s a good comparison. Liddell was built almost 50 years ago, and, like a 1971 model car, it is dirty, inefficient, old technology. It is a clunker, and a threat to human health.
Apart from its greenhouse gas contributions, Liddell pumped the following pollutants out its smokestacks in 2015-16: 1.9 tonnes of ammonia, 970 tonnes of carbon monoxide, 310 tonnes of hydrochloric acid, 360 tonnes of sulphuric acid, 260 tonnes of fluoride compounds, 17,000 tonnes of nitrogen oxides, 31,000 tonnes of sulphur dioxide, 550 tonnes of course particulate matter and 170 tonnes of carcinogenic fine particulates. There was a wide range of other toxins, too.
It also is unreliable. Last February, when south-eastern Australia was in the grip of an unprecedented heatwave, the electricity grid was stretched almost to breaking point. The average maximum temperature for all of NSW was a record 42.5 on February 10, broken the next day with 44 degrees.
The crisis was made worse by the fact that Liddell had broken down, as it often does. One of its four generators had lost half capacity on February 6, and failed completely on February 9. It was not back on line until February 28. A second unit failed on February 6, but workers scrambled to have it back up the day before the record heat hit. A third went down on February 7, and did not come back online until four days later.

But none of these catastrophes will happen before the next election, therefore, it doesn’t matter

Given that gas powered generation runs at around 1/3rd of carbon emissions, clean coal technology would have to go exponential even to keep up with standard gas generation. It’s so farcical, reminds me of the line, try to tell a lie that is so big that people might actually believe you.

In spite of gas prices, which could be fixed by sequestering sufficient amounts for the local market, we should be building gas back up with renewables generation, batteries and renewables pumped hydro. There is no case of any kind to ever build another coal fired generation plant, and those that are still around should be banned post 2030.

The problem wth gas is the way it is gathered. Fracking. Already fractures are damaging our aquifers. And gas is not renewable