The No. 1 person keeping Malcolm Turnbull in The Lodge is … Bill Shorten

For Shorten, voters appear reluctant to attribute any qualities to him at all, either good or bad.

Amid the ever-present cloud, there is at least some sort of silver lining for the Turnbull government as it considers last week’s batch of opinion poll numbers.

The silver lining’s name is Bill Shorten, whose already soft personal ratings were found to have deteriorated further by two separate pollsters.

One was the Essential Research poll for The Guardian Australia, which recorded a five-point increase in the Opposition Leader’s disapproval rating since it last posed the question a month ago, while his approval rating was essentially unchanged.

The other was the first Ipsos poll for the Fairfax papers since May, which had Shorten down six on approval and up five on disapproval, while Turnbull’s lead as preferred prime minister widened from 12% to 17%, despite some none-too-rosy personal ratings of his own.

It may not be immediately obvious why Shorten’s standing should have deteriorated quite so much over the past month — although his change of heart last week on confirming his citizenship status perhaps offers a hint.

However, a clearer picture of what’s been ailing Shorten over the longer term can be found in Essential Research’s leader attributes series, in which respondents are invited to give leaders the thumbs up or down according to a wide range of criteria.

[Malcolm Turnbull needs to reconnect with voters. Bill Shorten can show him how.]

These results suggest Shorten’s problem is not so much that he is viewed with hostility, as that he fails to rouse much passion one way or the other.

The most recent figures emerged in late June, and they offered the superficially encouraging findings that 59% rated Shorten as hard-working and 58% thought him intelligent (although he scored only 29% for “visionary” and 31% for “trustworthy”).

However, results like these are actually par for the course for political leaders, whom the public are generally willing to acknowledge would never have made it to the top of the greasy pole if they didn’t at least have hard work and intelligence going for them.

The other side to this coin is that none has cracked 50% on “trustworthiness” since the honeymoon phase of Kevin Rudd’s first prime ministership (and then just barely).

For a more meaningful insight into how the current leaders stand, the chart below records the differences between their recent results and averages from all such polling conducted by Essential since the 2010 election, a period encompassing two Liberal and three Labor leaders. 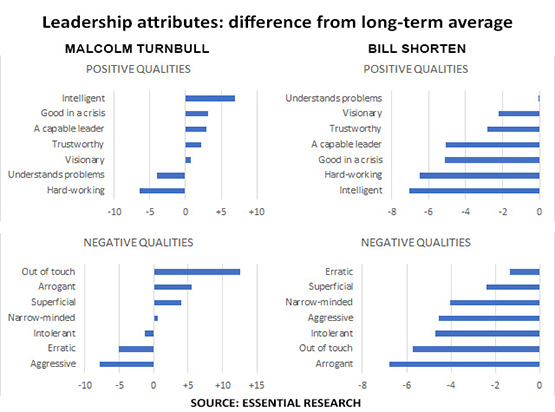 Malcolm Turnbull continues to rate well on intelligence, although he is no longer reckoned to be especially “capable” or “visionary”, as he was during the first six months of his prime ministership.

So far as negative characteristics are concerned, few fault Turnbull for being aggressive or erratic, but a clear impression has emerged since early last year that he is “out of touch”.

For Shorten, on the other hand, respondents appear reluctant to attribute any qualities to him at all, either good or bad.

If he is not rated as especially intelligent, capable or good in a crisis, nor is he seen as out of touch, intolerant or arrogant.

Lest it be supposed that vague impressions are somehow the natural lot of the Opposition Leader, respondents between 2010 and 2013 had an all too clear view of Tony Abbott, deeming him aggressive, arrogant, intolerant and narrow-minded.

Of course, none of that did him much harm at the 2013 election — and all indications are that Shorten’s elusive persona will likewise be insufficient to dissuade voters from dispensing with a government in which they have lost faith.

Please Dog, give us a catastrophe to bring on an early election – this mob have done enough damage, and show no signs of improving whatsoever.

I imagine the primary factor keeping Turnbull in the lodge is that there has not been an election since the last one, which occurred in 2016.

The best hope for labor is to appoint one of their women to the top job. Tanya Plibersek or Penny Wong have each got more going for them than ‘Zinger’ Shorten. They both could stare down the mad monk and demonstrate what a poisonous toad he is, and what a total disappointment Malcolm has proved to be without stooping to Shorten’s puerile ‘Zingers’. There just doesn’t appear to be much of an alternative. No one is thinking long term, no one has demonstrated a plan for longer than the next election.

shorten will be the next P.M of australia , no matter how loudly turnbull shouts or waves his tiny feminine hands around and rightly so, abbott was a disaster and turnbull is a catastrophy, the few coalition desperate s left know this but still cling to the faint hope that turnbulls titanic might somehow miss the ice berg, just give up and launch the life boats, the waters of opposition are very cold and unforgiving.

the stupidity of this article assumes that its readers are as dumb as the writer, it does`nt matter a damn who is the party leader in Australian politics as we are not a republic voting for a president, we are a party political democracy that votes for local members who pick their own leader as PM in government, Rudd was more popular than Abbott, Abbott won, Keating was more popular than Howard, howard won, just keep preaching to the desperate politically brain dead conservative rusted on base in the vain hope of a coalition victory, but stop abusing the intelligence of the rest of us, we`re smarter than you, not dumber.

We expected so much of Turnbull. He said all the right things, waved the right flags, rode the public transport , a real boots on the ground fellow but it is all a slide show – the person we thought would lead us through hard times is just a puff of fog on a dark night. A leather jacket with pretty buttons

A leather jacket with nothing inside it.

I expected precisely what we got from Truffles, he has always been a sell out and hollow man.

as morgan of morgan polling explains, personal approval rating of leaders matter little as they can be contrived by asking the right people the questions you want the right answer for and voters in Australia elect parties not presidents, rudd was much more popular than abbott, and keating much more popular than howard but both still lost their respective elections, dwelling on turnbulls popularity is the coalitions last desperate hope, voters in south australia and western australia in particular are waiting with baseball bats at the ready as soon as an election is called, turnbull is like george custer at the battle of the little big horn, the Indians are everywhere and not very friendly.