What will we learn about Saturn from Cassini's doomed mission?

What might it look like to human eyes as the Cassini probe dives to its destruction in the upper atmosphere of Saturn late tonight eastern Australian time, if we were to somehow hold off on the superlatives and emotions of being able to witness its plunge out of orbit around the gas giant?

Tonight’s NASA live video relay might prove incredibly clear and stable, and answer much of the question. But it could also rock under unpredictable ultra-high speed hits from increasingly rapid encounters with molecules of the tenuous outer atmosphere.

Static and transmission gaps might occur. Or with good fortune, it might descend in perfect working order, deeper into that astonishing tableau, revealing new features or details not yet glimpsed until those final few moments before it is torn apart and heated into an expanding and slowing shockwave of ultra-hot plasma.

The data transmission rates from Cassini tonight are the best that could be achieved by space technology more than 20 years ago, before the combined Cassini Huygens craft was launched.

Huygens was the European lander that flew with Cassini to Saturn and survived its descent in 2005 through the fortuitously dense atmosphere of Titan, Saturn’s largest moon and the solar system’s second largest planetary satellite after Jupiter moon Ganymede. It found a planet-sized moon where the triple point of methane, ethane and similar complex gases allowed them to exist as liquid seas and rivulets, and solids. Just like water vapour, in seas, as ice and in the atmosphere on Earth, and it seems very temporarily in some parts of Mars through every Martian seasonal cycle.

But back to Cassini, which had been making a serious of climactic orbital plunges between the innermost edges of Saturn’s rings and the top of its outer atmosphere. Until we could adjust our vision to the dimmer, almost gloomy lighting levels of a low-angled approach to the cloud tops of Saturn, our attention might be transfixed by the perspectives of the astonishingly complex ring systems arching above the trajectory of dying Cassini.

The earlier NASA image from some days back of Saturn’s clouds seen near the transition from night to daylight reveal languid-looking clouds of immense scale, some tall enough to cast shadows over lower “backwaters”. Read more about this image at the link.

You are falling toward a planet with an equatorial (not vertical or polar) diameter of around 120,536 kikometres, or 9.5 times that of Earth. But because of Saturn’s almost ephemeral low density, gravity (if one could stop on a cloud top) is only 1.07 Earth’s. Quite comfortable, for a micro second. Yet the planet turns on its axis every 10.55 hours, similar in that respect to larger and denser and nearer gas giant Jupiter.

If we have learned anything from the current NASA Juno space probe, which is closely orbiting Jupiter, it is compared to Saturn, decidedly “unlanguid”, with an exceedingly energetic and chaotic interior.

Until well into the space age of the latter last century, textbooks used to lump Jupiter, Saturn and the other outer gas giants, Uranus and Neptune, together as being similar in nature. But not any more. They are incredibly different in key attributes, and no doubt, when the data is examined after Cassini dies tonight, even more different, and more intriguing, than ever before.

A comparison day-to-night image taken by Juno of Jupiter is shown below. 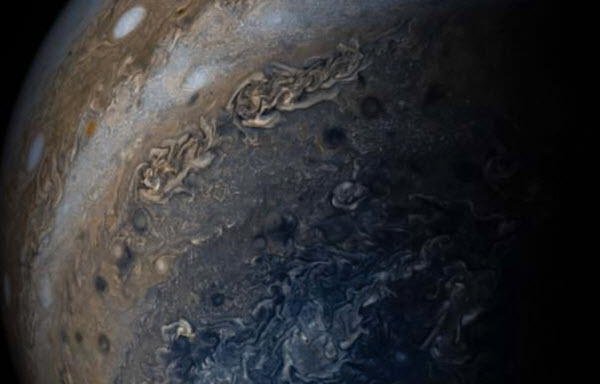 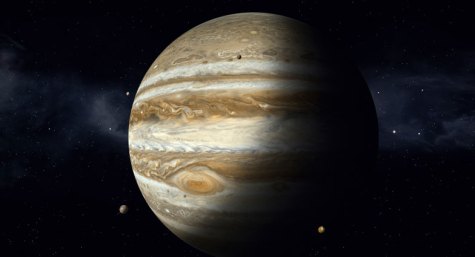 Dark matter: why the media bought NASA’s galaxy of lies about the Jupiter probe

Jupiter, the giant catcher’s glove, puts on a show

Suddenly closer to finding another Earth

Fabulous. Thanks for the link.