Does the fact that it’s a same-sex hate fuck remove the force of non-consensual sexual violence? Kind of but not really.

Well, it’s one way to get publicity. As Benjamin Law’s Quarterly Essay “Moral Panic 101” hit the beaches, News Corpse’s culture war Panzer divisions began to roll over the hill. They went with, well, culture war 101, a Twitter gotcha, one from August 30, in which Law suggested a forthright approach to the persistent No case activities of several politicians: “Sometimes find myself wondering if I’d hate-fuck all the anti-gay MPs in parliament if it meant they got the homophobia out of their system.” 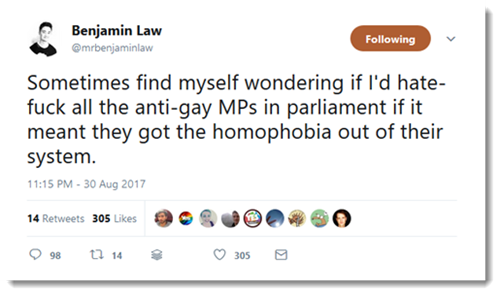 Hastie, when shown this tweet by the Oz, responded: “Noting my skills acquired in my previous ­career, I’d like to see him try.”

Which adds a whole new dimension to the thing. Though people appeared to see the thing as something new, it seemed to me to only need about four more exchanges to be a Genet novel. In 18 months’ time, there’ll be a theatre version at fortyfivedownstairs, with music by Dead Can Dance, and puppetry by The Trivago Girl.

Well, I thought it was funny, and this side of reasonable argy-bargy. But as hitherto established, if you’re just this side of my idea of what’s reasonable, you may not be in the safe zone. And, well, look — whatever the meaning of the phrase in certain contexts, it’s just a little rapey, isn’t it?

Law’s defence was that “hate-sex” — or, for those married more than 10 years, “sex” — was a “gen Y” concept, describing a consensual act. Yeah, uh, the phrase and the concept go a lot further back than that, but to get into the metaphysics of it — how can you consensually “hate-fuck” the homophobia out of someone? If they’ve consented to the “hate fuck”, the homophobia has been pretty much dealt with, wouldn’t you say? The idea — and the joke — only makes sense if there’s a non-consensual element to it. It only makes you laugh if it’s the last thing the recipient wants.

What’s the straight version of the idea of “hate-fucking” the homophobia out? Well, here’s where it gets a little confusing for Law’s fan base, because I don’t think it can be denied that the complementary idea is something like this:

“Sometimes find myself wondering if I’d hate-fuck every feminist at [publication X] if it meant they got the man-hating out of their system.”

Add the follow-up, after someone has thrown in a specific name: “[sighs heavily, unzips pants]”, and it’s unquestionably a little ugly.

Does the fact that it’s a same-sex hate fuck remove the force of non-consensual sexual violence? Well, in part yes, because of the mild/comic nature of Law’s public persona — recognised in Hastie’s response. But if “straight” rape jokes are never funny, categorically, then how can same-sex rape intimations get a dispensation? Male victims of non-consensual “hate-fucks” are usually the institutionalised young, in prisons or social care. Huge laughs.

How odd that no one has broken ranks to express some disquiet about this. Except it’s not, of course. And this is what makes many people furious at the sort of moral policing that occurs on social media — the suspicion, here confirmed, that who says something is more important than what they say. The whole defence — that the phrase “hate-fuck” is a get-out — relies on an insider/outsider logic, which tends to reinforce that elitism.

Still, as I said, I think it’s OK. But I also think jokes about “struggling actresses” are hilarious. By way of rounding out this criticism of Law, I’d like to say he has my full support.

The Sext Files: Can young people consent to explicit videos?

The thing that got me was that Law was *clearly* joking. Whenever someone on the right makes a “joke” that offends people, they whine that political correctness is killing the larrikin spirit. This shows that they just have their own political correctness, rather than rejecting it.

So a joke about rape is OK?

I’d say a joke about rape that specifies the people to be raped can’t be okay.

How many eggshells can Guy break in one article?

“If they’ve consented to the “hate fuck”, the homophobia has been pretty much dealt with, wouldn’t you say? ”

Um, no, he said in a condescending, you-straight-people-don’t-get-anything tone of voice.

yeah, I get yr point. What i’m saying is the scenario conjured up to make this a consensual scenario is pretty baroquely complex. The reading that makes the tweet funny is the simpler one, that the erm beneficiaries really don’t want what they’re getting. The….actually, I better stop there….

There is absolutely no part of ‘hate fucking’ straight or homosexual that implies rape. It’s simple, it’s fucking someone you hate, a consensual act by both parties.

It’s a rape “joke” alright. Not funny. And that is the worst thing you can say about any joke