‘Take me to your Asian leader’: ethnic communities find themselves at the heart of marriage equality debate

Do Pansy Lai and her ilk really represent the views of Asian Australians?

No one loves weddings more than ethnics. My Big Fat Greek Wedding, the wedding scene in The Family Law and the newly minted hit Ali’s Wedding could all take on Muriel’s Wedding any day for matrimonial obsession.

So it’s no surprise then that migrant, non English-speaking and non-Anglo voters, especially older ones, who are usually ignored by every side of politics, are suddenly at the beating heart of the same-sex marriage debate, whether they want to be or not.

Take me to your leader 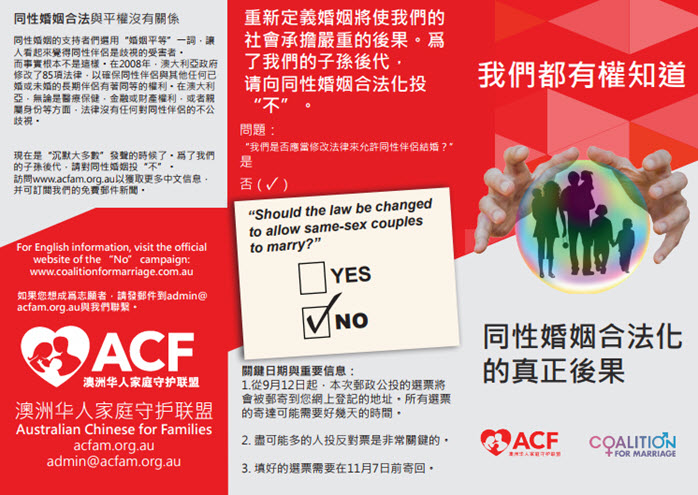 Part of this obsession comes from research released last month that found migrants of non-English-speaking background to be a group with relatively low support for same-sex rights (49.9%).

The research would have thrilled Dr Pansy Lai, chief of the Australian Chinese for Families Association. Lai, who appeared in the No campaign’s video advertisement is known for her broad sweeping statements.

“Chinese parents are telling me that they are fearful for what it means,” she told the ABC.

Earlier in the year Lai said: “We want to give a voice to the Australian Chinese community who are concerned about parents’ rights and freedom of speech being taken away.”

But does Lai really represent the silent majority of Chinese-Australians?

Sydney Yes vote activist Su-Min Lim says Chinese Australians are like any other ethnic group, including Anglo Celtics, in that there is some hostility to same-sex rights but also ambivalence. He also says many younger Chinese Australians wouldn’t even consider it a question, especially after Taiwan has legalised marriage equality.

“It’s convenient for groups like the Australian Chinese For Families (for example) to claim that they are representative of Chinese people here and for media outlets to swallow this lie whole,” he said.

“It’s easy for journalists to beam out a signal saying ‘Asians, take me to your leader’. Much harder to reduce the nearly irreducible complexity of many, many different individuals and groups into a headline.”

He credits evangelical and fundamental Christianity as the majority of the No vote’s target, who he believes take a more literal reading of the Bible.

“A particular subset are definitely being targeted in the No campaign. There are Mandarin language leaflets going round equating same sex-marriage to rape.”

Muslim Australians have also drawn criticism from both sides, with the focus on religious leaders who are opposed to homosexuality in all its forms.

Media from the ABC to The Australian have quoted Muslim leaders either stepping back from the debate for political neutrality or taking a strong No position.

However, as multi-faith Yes campaigner Mohamed Elrafihi told Crikey, it’s unfair for anyone to claim Muslims are unified against marriage equality.

“If anyone is out there saying Muslims are against same-sex marriage, they’re wrong. I’m a Muslim and I’m involved, and I’m not alone.”

[How the Yes campaign is being co-opted for selling undies, not solidarity]

Elrafihi is working in a group with Christians, Jews, Hindus and people from many ethnic groups to help the Yes campaign.

The work is in line with the Australian Council of Hindu Clergy announcing its support of marriage equality, citing Hindu texts that say “may all beings be happy, may all beings achieve their own good, may none experience suffering”.

Their flyers will be in Chinese, Hindi, Arabic, Turkish, Vietnamese and other languages with an emphasis on the human rights argument.

“The suicide rate in ethnic communities for LGBTIQ youth is much higher than in rest of society, and we need to raise awareness about that,” Elrafihi said.

“All these communities are having conversations among themselves, we are diverse in our views.”

Should Australia solve all its issues with postal surveys now?

Philip Ruddock is here to save us from secular persecution

“But does Lai really represent the silent majority of Chinese-Australians?”
She looks Vietnamese to me, so obviously not. Nor would a “silent majority” of ANYONE ever exist in a country that has compulsory voting (the whole point of a compulsory vote being that we hear everyone).
She also hawks gay conversion therapy (ie. pray-the-gay-away), which would make her more representative of the American Deep South than any part of the Asia Pacific.

The Mandarin leaflets must be getting aimed at the PARENTS of Chinese-Australians (they tend to neither be English-literate nor their kids Mandarin-literate); it wouldn’t work on anyone fluent or literate in both, but if you can’t crowbar the generation gap into a full breach, reforms like this can’t be blocked.

Assuming the Mandarin leaflets aren’t being handed out in Vietnamese neighbourhoods; a mistake the Howard campaign made in 2007.

I have never felt comfortable with the phrase, so willfully used by pollies of all brands, “community leaders”.
This assumption that newly arrived immigrants adhered to the rigid social mores of the old country was useful to ward heelers for a while but if it still exists today in this country then we have a problem.

That’s because the three main qualifications for being a “community leader” are…
-over 55yo
-not too deeply hued
-penis
Pansy got a waiver on Qual.3 because this time, they were in no position to be picky.

It always appalls me that only white people get to have diversity in political opinion. As far as the press are concerned all X (where X is your minority of choice) are the same. It treats members of these groups as less than autonomous humans.

They do? All Catholics (white black or brindle) are voting NO going by the popular press click-bait. Anyhow – since when do community “leaders” vote on behalf of their “constituents”?

Same problem. Substitute Catholic for X. Historically a source of great discrimination against Catholics who were consequently treated as second class citizens.

In any event you made my point, it was about how the group’s are perceived and reported. I should have been clearer.