Despite Scott Morrison's insistence, there's no link between company profits and higher wages. In fact, if there is a link, it may be a negative one.

Treasurer Scott Morrison continues to insist that wages growth will return soon because it is directly linked to corporate profits. “Investment leads to the profits which leads to the wages growth,” Morrison told 7.30 two weeks ago. He repeated the claim yesterday, telling Insiders “as their profits improve, then obviously the case for wage rises obviously builds”.

It’s the same line as peddled by Grant King of the Business Council (and nowhere else currently), who told one of those sublimely awful AFR round tables a few weeks back that Australians wouldn’t be getting a pay rise until corporations were making more money, thank you.

Well, let’s put that to the test by looking at how company profits have performed versus wages, using data from the Australian Bureau of Statistics’ Business Indicators (this is different to the Wage Price Index survey, but let’s compare like with like as much as possible). Does there appear to be any correlation between profits and wages to you? 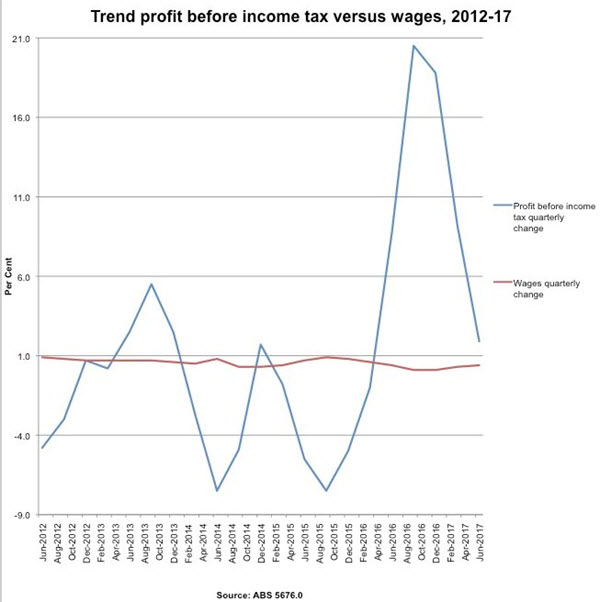 In fact it’s becoming increasingly obvious that if there is a link between profits and wages it’s a negative one. In the United States, wages have grown by more than in Australia, but still remain relatively weak and growth has fallen this year. That’s despite the US enjoying what has been frequently termed a “golden era” of corporate profits. In the UK, company profits have grown consistently since 2009 — and for most of that period, UK real wages fell (they’re now falling again, despite another lift in profits this year).

Why would there be a link between higher profits and power wages? Two reasons are obvious: one of the key drivers of higher profits have been corporations exploiting more employer-friendly and union-hostile industrial relations laws to curb wages growth; and corporations are growing larger (which is linked to the “golden era of profits“), increasing their bargaining capacity vis-a-vis workers because there is less competition for labour, and increasing their political influence as well, enabling to do what the Business Council has been trying to do for years — get politicians to make life easier for them.

Who knows — maybe Morrison will turn out to be right. But the experience in the US and the UK suggests that corporations will be hanging onto their higher profits rather than sharing them with the workers who help deliver them.