The recent Bureau of Statistics construction data was disastrous enough on its own. It showed building and construction investment has now declined for three financial years in a row. For the first time ever.

When we match construction work done with fatalities in the sector, the hypocrisy and dereliction of duty of the Turnbull government reach new levels.

For the first six months of this year, construction deaths soared to 19. Equivalent to 38 in a calendar year, that is one of the worst outcomes on record. It is vastly worse when we look at the dramatic drop in actual construction output.

We know already that the rate at which construction workers were killed increased alarmingly straight after Tony Abbott became prime minister. We can now see the rate is accelerating under Malcolm Turnbull.

The spike in fatalities, however, is vastly greater than can be explained by the puny 2.2% increment in activity.

In February, Crikey revealed the data from 2011 to 2016. With updates to some of those numbers from the ABS, this is the full picture to June 30 this year: 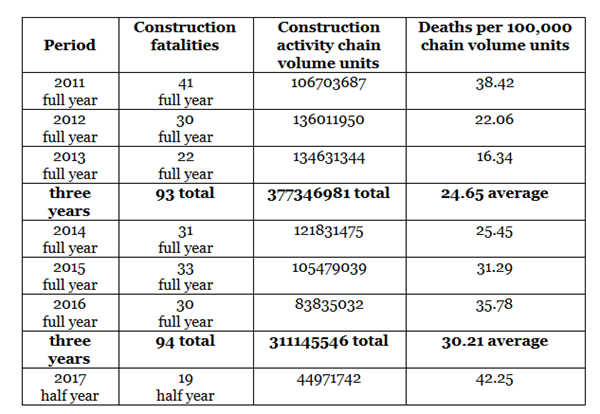 There is no doubt the Coalition accepts that construction is a commonwealth area for claiming credit — and, hence, also copping the blame. Many times before the 2013 election, Tony Abbott promised: “There will be modern infrastructure under the next Coalition government. We want to see cranes over our cities. We want to see the bulldozers at work improving our roads.”

And again: “My friends, I hope that in a few years’ time people can say of Tony Abbott, he was an infrastructure prime minister.”

The Coalition has also proclaimed that the federal government is culpable for any failure in duty of care in construction. In 2009 and 2010, MPs in the then-opposition, now the Turnbull government, made enormous political capital out of the tragic deaths of four young insulation workers. Tony Abbott blamed Kevin Rudd and his environment minister Peter Garrett personally for those fatalities. In February 2010, Abbott insisted that if Garrett had been a New South Wales company director, “he would be charged with industrial manslaughter”.

How has this come about?

While spruiking their ambitions to expand the construction sector, Coalition MPs explained how this would be achieved: by relaxing regulations that made life tough for construction bosses.

Tony Abbott specifically said: “Excessive regulation creates greater costs than benefits and discourages investment and the willingness to have a go.”

And: “They (Labor) want to put on new regulations and build new bureaucracies, we want to take the regulations off.”

Malcolm Turnbull has repeated and reinforced this mantra: “Deregulation, enabling businesses and individuals to pursue their own dreams, their own freedom, is the way to deliver the prosperity upon which all depends.”

It seems these have been taken as signals by construction corporations that it’s OK to relax their vigilance with regard to onerous regulations.

If this sounds harsh, what other explanation is there?

The cost in lives to June this year was 19. It is already up further to 20, with four months to go. There is no campaign from Canberra to address this accelerating tragedy. Nor, with most of Australia’s craven mass media steadfastly refusing to report these realities, is there any sign the Turnbull government is even aware it is unfolding.

Nothing from Michaelia Cash on construction industry deaths. Oh I forgot, this does not involve union thuggery.

Apparently enabling business to pursue their dreams is good, but ensuring that the dreams of the average construction worker to come home at night is just ‘red tape’.

“Trust us, the ABCC will fix all that.”

Is it not cheaper to pay out on injuries than prevent them?
Government agencies that regulate industries are seldom industrious.
That leaves unions to keep the workforce healthy.

Not to add politics to this sorry tale or nuttin’ but is there any data in the injury/accident statistics that identifies whether the victim is (a) a union member, (b) on a “closed site” and (c) some poor schlub in a dodgy visa category?
I won’t even mention the connection between ‘construction’ and “retail” to increasing population… ooops.