Step 1: talk about freedom. Step 2: talk about the children. Step 3: mention the 260 genders that will result from a Yes vote.

We’ve been told many times that the marriage equality plebiscite isn’t actually actually about same-sex marriage at all. Instead, what it’s “really” about is political correctness, freedom of speech, freedom of religion, gender fluidity, boys in dresses and potential marriage to national monuments. This is not accidental. As a Crikey spy has found out, it’s the No campaign’s central strategy.

Our tipster got curious after seeing a link to the website of No campaigners Coalition for Marriage on Senator Eric Abetz’s Twitter feed and decided to get inside information by volunteering to help. She was subject to a group induction/interview over Skype, and took some screen shots of the material they were sent.

They show that No campaigners are telling their volunteers to stick to the “slippery slope” line. As the document says: “The grassroots NO campaign engages people’s natural sense of caution and suspicion.” Doorknockers are given a script, including possible conflicts they will encounter and how to answer them, broken down into different age groups and their likely responses. Engaging this natural sense of fear, forms a free-floating basis of the No conversations. In their opening lines, doorknockers are encouraged to mention they are voting no because they “don’t trust what the government will do”. 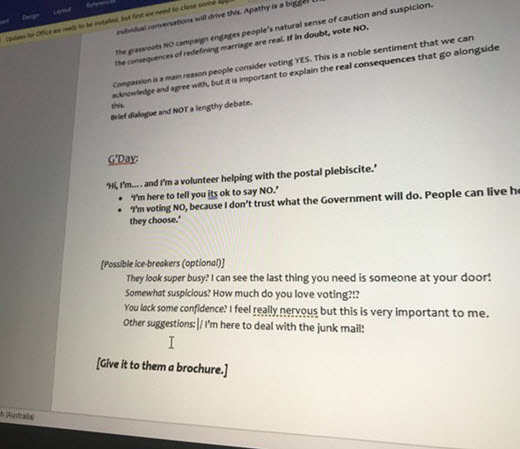 The talking points also breaks down the likely views on same-sex marriage based on age.

The 18-to-25-year-olds are classed as “mostly yes”. The volunteer is encouraged to congratulate the householder on their democratic participation and applaud the compassion that makes them likely to vote yes. However, they are to be reminded that this is actually a question of free speech, which they will “feel later on if this is lost”. The notes sadly leave out the most difficult part of the argument for the doorknocker: how to make the connection between the two concepts less opaque. 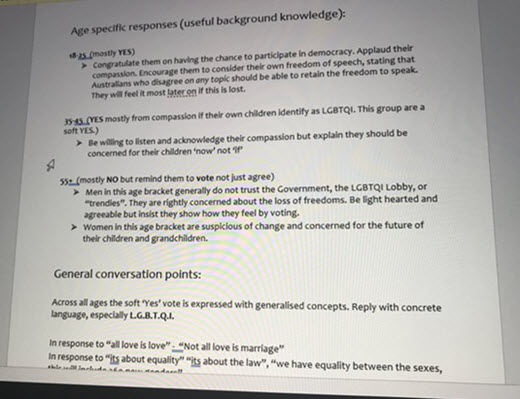 People between 35 and 45 are described as a soft yes “mostly from compassion if their own children identify as LGBTQI”. Doorknockers are encouraged to again acknowledge their compassion, but also that these voters should be told to worry about their children “now” not “if” — again, our spy said the campaign didn’t really explain what that meant.

The No campaigners see the over-55s as the most likely to agree with them. Men in this bracket, according to the CFM, distrust the government, the LGBTQI lobby and “trendies”(well, who doesn’t?). Women over 55 are also suspicious of change and worry about the futures of their children and grandchildren. The main challenge is ensuring they translate that distrust and suspicion into a vote for No.

Under “general conversation”, volunteers are encouraged to use the full acronym LBGQTI — our spy told us that the Coalition believes the full acronym “scares” people. The talking points set out rebuttals to common Yes campaign arguments. If they say “all love is love”, doorknockers are to say “not all love is marriage”. And if the punter says it’s about equality, the response is supposed to be the not at all baseless and/or insane assertion that “we have equality between the sexes, this will include 260 new genders” (sadly the genders remain unspecified).

If they do receive sustained argument from someone whose door they have knocked on, volunteers are encouraged to wrap up the conversation, say that they don’t hate anyone, they’re just worried about freedom of speech and children’s education. If they think they’ve clinched support, they are supposed to invoke the same two non-marriage-related topics (kids ‘n’ freedom) to make sure that support becomes a No vote.

What a bad argument. I’m pretty sure the general public know full well how marriage works, seeing as they’re probably married themselves. They probably have enough sense to understand that lifting a prohibition is the exact opposite of having the government tell people how to live. If the yes campaign can stop screeching about the evil public debating SSM and present the various good arguments in favour of lifting the prohibition, we’ll get this done.

“Give it to them a brochure”?!
That sounds so…biblical…

I’m a bit rusty on the Bible, but didn’t Moses gave a brochure to the Israelites?

A travel brochure possibly, promising a land of milk & honey, ordained for them if they just smote the inhabitants sufficiently often.

“ordained for them if they just smote the inhabitants sufficiently often.”
Yes, but the motive and reason? Let me help you.
The people who were occupying the land during the Nation of Israel’s absence were not human. The Moabites, Jebusites, Hittites etc were descendants of the Nephilim, mutants who were half human and half angel. They were giants. There is historic extra biblical account of these people occupying half of the European continent let alone the land of Israel. Also, The Book of Enoch is replete with information on the havoc they caused to the whole planet and God gave the 12 tribes of Israel commission to wipe them out. Things are never what they seem, as you know.

Now isn’t that fascinating, who needs history when you can just make stuff up…..

Att: Leon [email protected] 12, 2017 at 3:26 pm
Have you learnt to count pass zero yet? How about the “group think”? Have you matured enough yet not to worry if you might lose a single follower because of the truth?…gotta get those ” likes” eh, or the sky might fall. Chicken Little?…or just a Little Chicken? Nah! you’ll just continue compromising your life away because that’s what immature and insecure people do. Compromise!!! Anyway, lets be “Blair” about it all…ahhhh that’s a typo. I meant Fair about it all. Bwahahahahaha…Bwabwahahahahahhahahaha. Oh stop it, please stop it..my sides are aching. Bwahahahahaha. Roflol Bwahaha…it’s a gotcha of all gotchas. Bwahahaha.

Actually, I do apologize leon. That was a bit too close to the bone….the “chicken” bone that is. Bwahahahahahaha.Rofl LoL..Bwahahahahaha.

Once again, all I can feel is worry about the company that “No” campaigners keep. Are they so stupid or ideologically blinkered that they will not feel embarrassed trotting out this “No” campaign tripe?

Point 1. I have talked about freedom most of my life. I have learned that no freedoms are absolute, unless we say confine them to freedoms to do the right thing. Freedom of speech is not absolute but freedom to say the right thing is. Freedom to slander or denigrate people, such as when Nazi’s engage in hate speech to say that Jews, say, are vermin, is not right and we should not have that freedom.
People have the right to say all sorts of things I think are wrong, provided that they are not harming others with what they say. A religious person who wants to say that gay couples should be stoned to death should not be perfectly free to say it.

People should be free to do what their religion says is right, provided this does no harm to others. At the extreme, stoning gay couples to death should be stopped if we can. Equally, we should stop people from discriminating against them or persecuting them in other less lethal ways than by stoning them to death.

By now, some “No” campaign door knocker will hopefully have given up. But if he/she knows I am over 55 , he/she might persist with point 2. What about the children, he or she might might ask me. I will tell him or her that parents who love their children and care for them get all that they need, so long as no-one is trying to harm them because their parents are gay or lesbian, or whatever. Are those children “stolen”? Well no. like many other children their biological parents have freely decided not to parent them as they grow up. It is hard to imagine gay or Lesbian parents taking care of children who have been really stolen, as kids who had babies were sometimes forced toggle them up by religious or their own parents pressure, or aboriginal mothers had their children taken from them by their “protectors’ so they could be raised to be hewers of wood or bearers of water because their supposedly inferior blood did not fit them for any higher purpose in life.

No doubt the “No” campaigner will not get as far as trying to tell me about the absurd idea of “260 genders that will result from same sex marriage.” They will know I am not as stupid or blinkered as the many “No” campaigners they mix with, who are incapable from recognising that the claim that 260 genes will follow same sex marriage is so ridiculous that it should not be uttered in company. Unless they really do think the average Australian over 55 is so stupid that they might vote “No” when they put their “arguments” forward?

Word correction typos: replace “genders” with “genes”; “from” with “of”; “toggle” with “to give”

I really doubt if most door knockers will get far enough to give up, since it’s very doubtful that the person writing that script has ever actually been canvassing. Therefore, I feel entirely confident, that when some twat knocks on the door and pronounces, “I’m here to tell you that it’s okay to say no”, then most Australians will think, ‘well, okay, I’ll say no to you’ and promptly shut the door.

A friend of mind regarded this as an opportunity to invite the door-knocker in and keep them talking by asking questions to demonstrate great interest and determination to be fully informed on every minute detail until the whole afternoon was wasted and it was too late in the day for the door-knocker to knock on more doors. He got a lot of laughs telling some of the stuff he was told.

The yes campaign will win by a modest amount and that is enough. If you are so addled that a grandmother showing up at your door and convincing you about some bullshit concerning 260 genders and that you should vote no – then you shouldn’t even be walking the streets let alone voting.

Are you saying grandmothers are less credible than say young men?

If there is one person you can absolutely trust to lie and obfuscate, Shelton is your man…that nose looks like an alcoholic to me…

They say that when you’re 50, you’ll have the face you deserve. I always thought it was the ugly soul oozing through the pores…

Six Across
Reply to  Fairmind

I’ve just had another look – you’re right it does