Gone in a New York minute. Is Mia Freedman’s American enterprise out of puff? A Crikey tipster tells us that her US women’s site Spring.St has sacked all its staff and let its office lease (in Spring Street, Soho) expire, but the search for an investor is still on. An email sent to contact@spring.st bounced back saying the account had been disabled, not to mention the website’s homepage hasn’t been updated since late July. Spring.St was originally dubbed Flo + Frank and then renamed after a change in strategy to more “positive, uplifting, inspiring and inclusive content”. That was before Freedman took a hit for her “fatphobic” handling of a podcast with writer Roxane Gay, possibly hurting her credibility in the states. Mamamia hadn’t responded to our query by deadline, but it seems there’s a big question mark over whether Freedman’s global ascent is going to plan. Know more? Get in touch. And you can stay anonymous if you wish.

Sharp shown the door. There were a few headlines out of the Nationals conference this weekend — banning the burka didn’t pass, ending subsidies to renewable energy did, and fundraising speed-dating came at a great time if party leader Barnaby Joyce faces a byelection for the seat of New England some time in the near future. We also hear that the conference marked the end of the former MP John Sharp’s 17-year tenure as treasurer of the federal party. Sharp lost the vote on the position to former president of the Victorian branch of the party Peter Schwarz. The former minister for transport and regional affairs left office as part of the 1997 travel rorts scandal, and his career has been covered by Crikey here.

Lachlan Harris in hospital. Former Kevin Rudd staffer and One Big Switch founder Lachlan Harris is currently stranded in Canberra in the worst way: after a very serious car accident last week, Harris will be in hospital for an extended period while he recovers from his injuries. With any luck he’ll be moved to Sydney at some point but is expected to be hospitalised for six weeks. We wish him a speedy recovery to full health.

It’s an ill wind and all that. Besides being one of the homes to Richard Branson (who grandstanded his way through the storm), the British Virgin Islands is one of the major pit stops in the global capital and tax-sheltering game — legal and otherwise. It is a tax haven, along with Panama, Nevada and Delaware, Malta, Gibraltar, Lichtenstein, the Channel Islands, Luxembourg and even New Zealand, so far as trusts are concerned. It has also been whacked by Hurricane Irma, which seems to have caused more damage than any number of national tax offices, fraud investigators or supranational tax agency. A state of emergency has been declared after Irma cut electricity throughout the British Virgin Islands and knocked out vital communications infrastructure, leaving the 35,000 residents isolated from each other and the rest of the world. The big four global accounting firms KPMG, Ernst & Young, PwC and Deloitte all have a presence in the Virgin Islands, as well as many other professional services businesses. The Financial Times reports that more than 1 million companies are incorporated there. Research conducted by development charity Action Aid in 2013 found 98 of the companies in London’s main sharemarket index, the FTSE 100 had BVI subsidiaries. And for all that money sloshing around the place (in reality kept in segregated bank accounts in the US and UK, France and Germany), we wonder if the storm has caused so much damage to infrastructure, offices and computers that money has literally vanished into the wind or floodwaters because all the records have been damaged or blown away?

Late take off. Attention all Qantas suppliers. A Crikey tipster claims that the flying kangaroo isn’t paying its contractors and small business suppliers within the 30 days stipulated by Alan Joyce, sometimes taking several months. If you know anything more, send us an email or stay anonymous on our tip off page.

The torso of the marriage equality postal survey. The Australian Bureau of Statistics is keeping up its hyper neutral stance on the same-sex marriage postal ballot with a new advertisement. The photo shows a headless postal worker or tradie (?) holding an envelope, presumably because having a face on the ad would be too gendered or biased in some way. At least the ad includes a person. The first ad campaign from the ABS starred a variety of Australia’s stunning landscapes in its extreme attempt to avoid controversy. 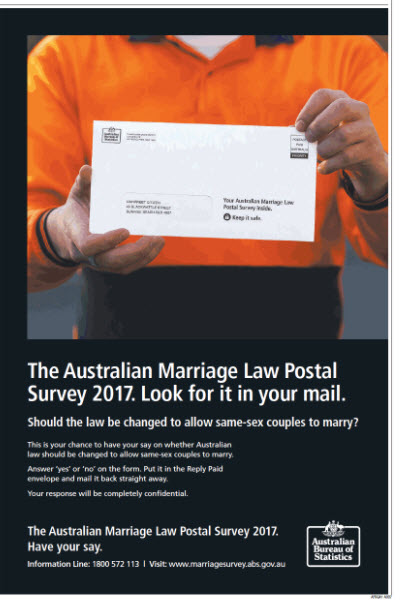 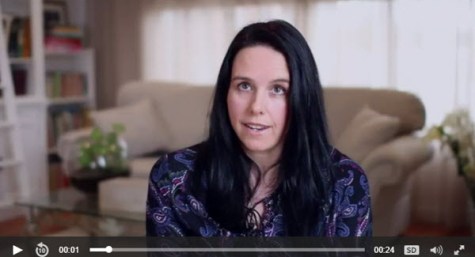 LEAKED: Deleted scenes from the ‘You can say No’ video

The ABS has to do the ad this way to be safe. There was something in the media recently about being able to determine a person’s sexuality from their face.

Those hands look very blokey to me, I feel oppressed.