Our justice system is built upon the principle of innocent until proven guilty. Demanding that MPs who have not been charged with anything stump up documents is a very dangerous path indeed.

Gosh it’ll be nice when we move on to the phase of Australian history in which not every single new development is a product of something gestated in Tony Abbott’s burning ego.

However, that seems a distant dream for now. The latest parliamentary week kicked off with a classic Abbott hijacking: there he was outside Parliament House, brandishing the documents that nobody had asked for proving he isn’t a Pom, and demanding that Bill Shorten “put up or shut up” in turn. Which made as much sense as everything else he says, since Shorten wasn’t actually saying anything.

Still, point made, and what could Malcolm Turnbull do but get up in the House and say the same thing in bigger and less interesting words? Yeah, he shouted unconvincingly, what does Bill Shorten have to hide?

The gotcha moment that followed with all the dramatic suspense of a MasterChef episode involved Shorten saying something along the lines of “Oh, for fuck’s sake” and producing the documents that prove what he’s been saying all along: he’s not a foreign citizen. An uninterested nation vaguely registered the proof of Shorten’s innocence, of a charge for which there had never been any evidence, and got back to ‘gramming their lunch choices to each other.

As I usually ask in my fourth paragraph, so what? The media was generally approving in tone of Shorten’s decision to own up to his non-guilt, but focused mostly on how the government had managed to pull off yet another tactical defeat in its war against itself. Nobody seemed terribly concerned that the onus of proof had just been successfully, and perhaps irreversibly, reversed.

Shorten did actually warn us about this, but it was on Q&A so only the cultural Marxists who watch the ABC knew about it. Pressed repeatedly by Tony Jones to produce the evidence that he had renounced his British citizenship, Shorten pointed out that that was bloody stupid. Remember what happened when Obama finally gave in and produced his Hawaiian birth certificate? The birthers said it was a fake. And then he became president.

[How Dutton is slowly undermining the rule of law in Australia]

The immediate context of this new syndrome of guilt until proven innocent is the dreaded section 44 of the constitution, the bete noire of Parliament House. It might be causing devastation, but at the end of the day it’s just another law. Like all laws, it is not a bright line; there is no objective truth as to who falls fair or foul of its imprecise words.

The media treats section 44 like some sword of justice. The parliamentary parlour game de jour is to guess who else might be an illegal on its terms; is Senator Whatserface a secret Ecuadorian by descent? Are all the parliamentary semi-Jews caught by Israel’s right of return? Each inquisition commences with an idle Wikipedia-researched what-if. The target is then chased down, cornered and hounded for proof that the theoretically possible is definitively untrue. And then the media decides, by Twitter majority, whether or not said MP is clear or will remain under a cloud.

[Two weeks is a long time in politics: the ever-changing citizenship status of Malcolm Roberts]

It’s stupid — and it’s deadly. The drafters of the constitution took the question of eligibility so seriously that they gave exclusively to the High Court, sitting as the Court of Disputed Returns, the power to determine who is and who isn’t. Section 44 is poorly drafted, but even if it had no ambiguity there would still be no certainty about who it catches and who it does not. That’s the way law works, it’s why we have courts.

Because law is a set of guide posts in a sea of uncertainty, and nothing more, we are supposed to understand that ambiguity is a necessary aspect of society. If we start treating every suggestion of non-lawfulness as being worthy of acceptance until proved wrong, then the whole thing simply doesn’t work. The denial, of our right to be presumed innocent until some cogent basis for suggesting otherwise is produced, leads us in a straight line to the anti-truth presidency that presently endangers the world. It’s not where we should want to go. The fact that Tony Abbott is keen on it should be warning enough.

Shorten was right before he was wrong. He should have told Abbott and Turnbull to get stuffed, to put up or shut up themselves. I sincerely hope that this particular form of antisocial lunacy doesn’t catch on, or we’re utterly screwed. 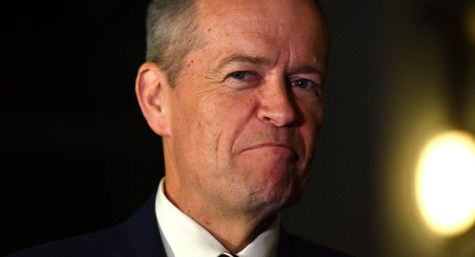 Hinch’s Senate Diary: why Bill Shorten shouldn’t be picking curtains for The Lodge just yet 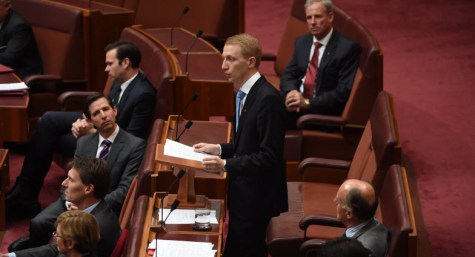 “Gosh it’ll be nice when we move on to the phase of Australian history in which not every single new development is a product of something gestated in Tony Abbott’s burning ego.”

Hallelujah, and amen to that! What a chancre on the body politic this failed priest has become.

One wonders what Abbott may have perpetrated on the Catholic church had they failed to elect him as a cardinal….or even Pope.

The Curmudgeon
Reply to  klewso

To paraphrase, “will nobody rid me of this bubolent priest!?”.

In essence I agree with you, Michael.

Although it may have secretly amused Shorten to string them along for another year or so until the accusations reached fever pitch. Perhaps he could’ve toyed with them, mischievously fuelling the fire by appearing slightly guilty. Then eventually producing proof once the entire government had become rabid, all Coalition MPs turning that beetroot colour familiar on the front bench. It’s the Keating method of “do you slowly.”

However, Shorten has neutralised this diversionary tactic the Coalition can use to draw attention away from their own woeful performance as a government. It means they have one less distraction in their box of tricks with which to attack Shorten. They’ll have to resort to the hackneyed trade union material, as stale as it is.

There’s a rich ‘vain’ of mindless lynch-mob vigilantism that courses through our msm rat race – in some quest for “entertainment as news” – wherein, conversely, there is also righteous absolution in numbers, when they are caught prosecuting up the wrong tree.
….. Then it’s funny watching them come out against “trolls”?

So, now that Shorten has conceded that the last two Prime Ministers of Australia do not trust any other parliamentarians to who or what they say they are, should he support the Green’s request for a full audit of the compliance of all members of parliament under section 44.

That would change this wave of Section 44 turmoil from something the Prime Minister had no control over, to a problem he has dramatically increased by trying to play politics with it.

The ‘Christmas Carol’ fiasco in South Australia would be a point in question.