Hinch’s Senate Diary: why Bill Shorten shouldn’t be picking curtains for The Lodge just yet

Derryn Hinch's citizenship dramas and section 44 questions are put to bed, and the Coalition's Kill Bill strategy seems to be working.

Over the weekend, we were at that venerable Sydney watering hole, The Lord Nelson, at The Rocks, for a reunion, 20 years on, of people who worked in the newsroom and on the Hinch and Clive Robertson programs at John Singleton’s 2GB.

I was also celebrating the fact that over the same weekend it was decreed in Canberra that I really am an Aussie, not a Kiwi, and certainly not whistling Dixie as a pseudo-Yank.

It was a massive relief, especially when you have diligent, devoted staff wondering if they’d still have a job.

I will confess, I could see the lighter side. At the radio reunion, I sidled up to Mike Jeffreys (2UE-2GB now Sky), Jason Morrison (2GB-2UE now Channel Seven Sydney news director) and my radio producer Nicky Clement Elliott — now an award-winning documentary maker. I offered to buy them the first round and produced an American greenback $100 note.

Gotta laugh as this citizenship schmozzle gets crazier by the week. Or you’d go crazy.

Especially when, in the middle of the madness, Twitter trolls started claiming that my US Social Security number saga was a self-created publicity stunt.

And it got worse when Samantha Maiden and Ashleigh Gillon of Sky News, and the Poison Dwarf — Steve Price, of 2GB and 3AW — joined the trolls and their “stunt” theory.

“Dear Derryn, I have been contacted by somebody who claims you still have a current US social security card and/or green card and by doing so may be in breach of section 44 as a result of the fact holders of such cards are eligible for benefits from the US and section 44 states you can be disqualified from being a federal politician if you are entitled to the rights and privileges of a subject or a citizen of a foreign power.”

On that dual citizenship issue I thought that Senator Katy Gallagher’s explanation was one of the most eloquent and most convincing of them all. How her English mother was born in Ecuador but in the British embassy grounds in a birth never registered in Ecuador. One Nation’s Malcolm Roberts’ was the least convincing.

And wasn’t it great on Monday that Opposition Leader Bill Shorten finally produced his “I’m not a Pom” paperwork in the House of Reps? OK, it took him three damaging weeks — but it took Tony Abbott three years.

This is not a 17% rush of blood to the head. But Malcolm Turnbull’s increase in his lead over Bill Shorten as preferred prime minister may be a sign that the government’s new, and belated, Kill Bill strategy may be working.

Maybe it is too late, but I am one of the few people in Canberra (I suspect on both sides) who thinks Bill and Chloe should not be picking curtain material for The Lodge just yet.

I know senior cabinet ministers were angry, in retrospect (after their margin shrank to one seat), because they had listened to the “experts” and shelved their “get Shorten” strategy in the marathon campaign last year.

They won’t make that mistake again.

The shonky money deals, exposed by the royal commission, are already being flagged again by Michaelia Cash in the Senate. Watch for more.

Going back to the Lord Nelson, as I did at the weekend. It was my old stomping ground when living on Kent Street in Sydney in the mid-1990s.

On Sunday, in a quiet moment, I went back to the same corner table where I used to devour the Sunday papers while picking on a Ploughman’s lunch over a dark ale.

It brought back memories of another Sunday several decades ago when I sat in that corner wading through the papers and the cheese and pickled onions.

I got a phone tip from a contact in Tasmania that “something big’s going on in Hobart”. He said: “Maybe three or four people dead.” Half an hour later an update: “Hinchy. I’m hearing there could be 10 dead.”

As a new “star” at 2GB I had some clout. I’d only been on air there for about a month. I raced into the station, threw the footy off-air and broadcast live for the next five hours. It was the Port Arthur massacre.

I then grabbed a flight to Melbourne, another one to Launceston and then drove through the night to Hobart to talk to survivors.

A funny footnote. John Singleton, who had hired me for the morning shift on GB against his mate John Laws, was driving back from the Blue Mountains in the Roller that Sunday afternoon and decided to tune into his radio station to listen to the football.

He heard my voice and made a mental note: “Must call the bloody station and tell them that Hinch promo is too fucking long.”

Then it dawned on him that it wasn’t a station promo. Something really big was going on. 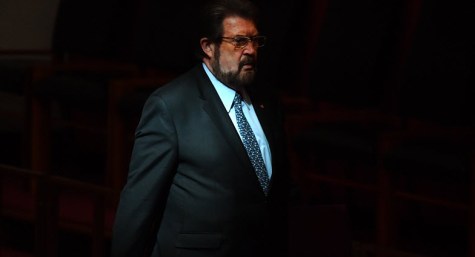 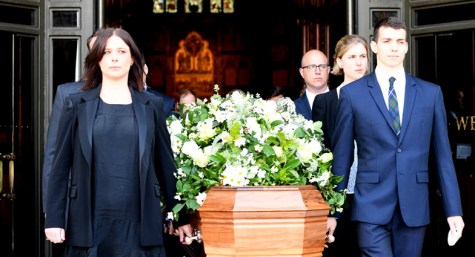 Hinch’s Senate Diary: the voters don’t trust government anymore and neither do I

“This is not a 17% rush of blood to the head”
No, it’s a 17% alc/vol.
Now go catch up to the wagon you say you didn’t fall off, dole-bludger.
Because if you’d relied on Brandis for legal advice in the past, you’d STILL be in jail.

Sheesh Crikey. I know times are tough and you probably think that a freeby from Hunch is a good way to fill up the daily newsletter… But trust me, it’s not!

I haven’t renewed; I’m just running my subscription out. Make of that, what you will.

So that makes two of us that I’m aware of.

Michaelia Cash – denizen of frippery and rambunctious enunciation. She is seriously going to need someone else to do the dirty work for her.

“This is not a 17% rush of blood to the head. But Malcolm Turnbull’s increase in his lead over Bill Shorten as preferred prime minister may be a sign …..”

that in spite of all evidence to the contrary, pundits and commentators still put some value in this, the most useless of all polling questions, indicative of nothing at all.

And how is Mal going in the poll on who makes the best opposition leader? That would be an equally stupid question for pollsters to be asking.

Wasn’t John Howard a permanent wooden spooner in the “Best PM” category poll after poll? And didn’t the same JH keep rolling all comers until Rudd took him down?

This is some seriously silly stuff. I don’t come to Crikey to get my own views confirmed, but not am I interested in nonsense either.

The coalition has been trying to criminalise Shorten for years and all they have done is piss money down the drain with nothing to show for it. If Hinch has something meaningful to say on the subject he might simply say it.