There are still months to go until Crikey‘s annual Arsehat of the Year awards, but a strong contender has already emerged, in Dick Smith and his tantrum about the ABC.

The entrepreneur and publicity magnet is incredibly upset that the ABC has apparently been ignoring his campaign against population growth. So upset that he’s going to launch an advertising campaign against the national broadcaster. Or so he’s told The Sydney Morning Herald, which has given him most of its second page today. According to the report, which wasn’t in the Herald‘s Melbourne stablemate The Age, but is on its website, Smith reckons politicians on all sides can’t publicly say they support cutting immigration because the ABC would label them racist — something he’s called “treasonous”. So now he’s told the Herald, without apparently actually putting any money on the line yet, that he’ll be running an advertising campaign to “take away the ABC’s credibility” on the issue. 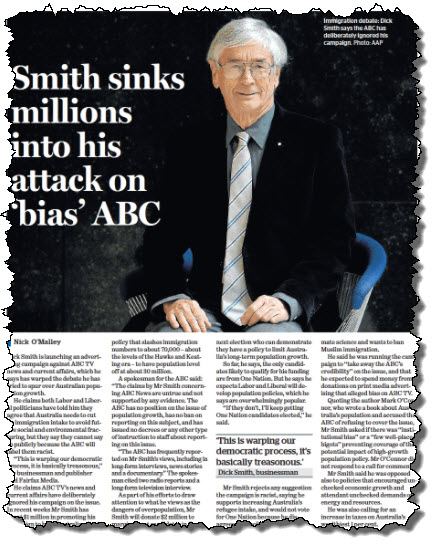 On cue, the story has already been picked up by News Corp’s news.com.au, Daily Mail Australia and Nine.

But if the ABC has been silencing Smith’s campaign, it’s got a funny way of showing it. The day before he launched the campaign in August, he was featured in a radio story on The World Today, did a wide-ranging interview on Radio National early last year about population, and the ABC screened his full-length documentary Dick Smith’s Population Puzzle in 2010 (which has a section on the ABC website, which is still live).

In a statement quoted in the news story, the ABC said it hadn’t issued any decrees about reporting the subject.

In a rambling blog post on his website, he said the campaign hadn’t received any attention at all on the ABC.

Smith has a track record of drumming up outrage to get attention. An Australia Day ad he produced proved a source of plenty of media outrage (including from Crikey) when it was “banned” for innuendo around the phrase, “I love Dick”. The news coverage he got would have outweighed by far any advertising he’d apparently booked — and rumours are in media circles he never paid for any advertising at all.

He’s a regular on tabloid and morning TV promoting Australian-made products, despite the fortune he made on his Dick Smith’s Electronics stores — mostly stocked with cheap products made overseas.

This latest tantrum seems to be down to not getting enough attention from the ABC. As per his account of yet another stunt back in 2010:

“I look back at when I launched the Wilberforce Award, which is $1 million to go to a young person under the age of 30 who can communicate that we can’t have a continuing growth economy. At the launch I had $1 million in cash, a security dog and five beautiful ‘blonde bombshells’. The ABC sent along their news camera team and a reporter who asked me three questions about — wait for it — racism, which the Wilberforce Award is not linked to. When the reporter could not get an answer linking the Wilberforce Award to racism, yes, you guessed it, there was no coverage whatsoever about the Wilberforce Award on ABC TV or current affairs.”

Smith might be upset that the ABC is only giving on-merit coverage to his stunts, but there might be no need for the advertising campaign after all.

As always Australia’s very own rent seeking mainchancer Duck Smith oi, oi, oi, is now aspiring to be arsehole of the year. Many expect that he will (as only people of his ilk can) win the arsehole prize hands down.

The correlation in the SMH story that Dick himself draws between his “Ye Olde Australia” supporters and One Nation voters has always been plain for anyone to see. Everyone with a backyard big enough to land their own private helicopter on, right Dick? Deluded, grumpy old white men, basically… But I’ve noticed a lot of Crikey readers like his anti-growth anti-wealth position too. But like Dick, none of them mean their own wealth.

Yes Teddy, because immigration is always altruistic. It would never be exploited for things like this https://www.crikey.com.au/2017/09/06/company-profits-boom-while-regular-aussies-suffer-record-low-wage-growth/
in any way.

It couldn’t be, because everyone in the world enjoys a comfortable standard of living on a decent minimum wage, so there’s no downward pressure on wages anywhere. There’s no unemployment, no underemployment, no pool of surplus labour or cheap labour. No need to emigrate from an impoverished land to a wealthier one. There are no impoverished lands. Those Chinese farmers who fake fossils do it for fun- not to feed their families.

And anyone who says different is simply a greedy racist. There is no reason at all to question human economic migration, ever.

What gets me is this: “Mr Smith has also announced he will donate $2 million to marginal seat candidates in the next election who can demonstrate that they have a policy to limit Australia’s long-term population growth. So far, he says, the only candidates likely to qualify for his funding are from One Nation.” He goes on to say that he’ll, “keep getting One Nation candidates elected,” but he, “rejects any suggestion the campaign is racist, pointing out that he supports increasing Australia’s refugee intake, and would not vote for One Nation himself because he disagrees with policies that reject climate science and would ban Muslim immigration.” (all from the CT at http://www.canberratimes.com.au/federal-politics/political-news/dick-smith-to-campaign-against-alleged-abc-bias-20170905-gybejm.html.)

So he’s happy to promote a party that he is fully aware is racist and harmful to Australia’s interests – and yet he says that it’s the *ABC* that is un-Australian? Good grief.

Dick Smith, save the advertising campaign money & direct it to one of your worthwhile charitable causes (excluding One Nation). The ABC currently has a plethora of enemies in high places &, to the average Aussie, this anti-ABC vendetta will look like tacky self-indulgence.