A new arts lobby group will crunch cultural spending by federal electorate, and use focus groups to hone a pro-culture message, reports Ben Eltham. But will it work?

As Crikey reported last year, the arts sector is set to get a new lobby group. Thanks to a joint funding package by wealthy philanthropists at the Myer, Fairfax and Keir Foundations, $1.6 million will be spent setting up “A New Approach” program to promote the value of culture in Australian life.

Few in the arts sector would argue about the need for such a group. As the now-notorious raid on the Australia Council by George Brandis in 2015 showed, the sector lacks a muscular lobby group that could campaign for the value of culture to politicians and voters.

We now have a little more information about the form that the new lobby group will take, after an announcement by the Myer Foundation that it has awarded the contract to the Australian Academy of Humanities and spin agency Newgate Communications.

It appears as though the three charitable foundations funding A New Approach have mixed and matched from the proposals they received, appointing the Australian Academy of the Humanities to do the heavy lifting of policy research, with communications agency Newgate Communications given the task of making sure the academy’s research reports cut through with policymakers and the public.

[Aunty’s pain in the arts]

The Myer Foundation’s Leonard Vary told Crikey that “the goal is to establish an independent voice capable of championing investment and return in culture” and that the two agencies chosen were the “best placed to deliver that goal”.

Vary also defended Newgate’s role. “‘Spin’ isn’t even the word I would apply to the critical function of engaging with the sector, the community and with government,” Vary argued, adding that “one thing we are very clear about is that the project is not about preparing reports that are not enlivened and activated”.

“The way in which arts policy in this country is formulated is deficient in many ways,” Vary told us, pointing out that with a limited federal budget for culture, “the more efficiently we use those funds, the better”.

Newgate is a slick corporate communications outfit that boasts many former spin doctors for top politicians. When Crikey enquired about the new arts lobby, we were contacted by Newgate’s Simon Troeth, once a spinner for Ted Baillieu.

“Newgate’s value in supporting this initiative is based on our ability to provide independent, expert advice in campaigning, strategic communications and stakeholder engagement,” Troeth wrote in an email. “The fact we operate outside the sector — but have had extensive experience advising within it — means Newgate in conjunction with the academy can make a valuable contribution to an initiative that has the potential to institute positive and long-lasting change to the future of the Australian arts and culture sector.”

Exactly what the new program will do is still anybody’s guess. According to the academy’s Christina Parolin: “At this stage there isn’t much more to say than what is known publicly.”

“It’s early days yet and our immediate priority is the recruitment of a program director,” Parolin wrote.

Parolin argues the Academy is well-placed to do the policy grunt work, drawing on the expertise of its 600 fellows drawn from the top ranks of Australian universities. In recent years the Academy has been active in defending the value of the humanities, particularly through work done by noted cultural studies scholar Graeme Turner.

“It’s our intention to engage broadly and consult throughout the course of the program,” Parolin told Crikey in an email, “drawing on our networks both within and beyond the Academy, to ensure that the benefits that cultural expression, practice and research bring to the nation are widely understood, and that they inform policy development across a range of settings.”

[Can an actual artist afford to go to the Melbourne Festival?]

One thing’s for sure: the program director will have her work cut out for her meeting the requirements of the job. According to the application package, which Crikey has seen, the director will report to a complex set of committees and bosses. In addition to Newgate and the Academy, the three foundations funding the program will have direct oversight. 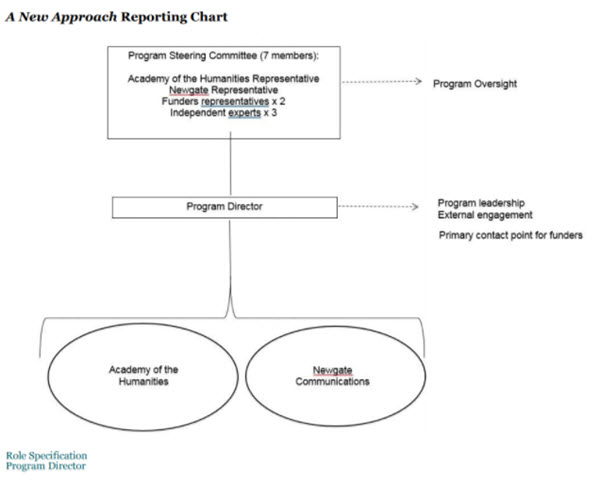 The position description also gives us some tantalising hints about the approach of A New Approach. The document says the academy will map arts and cultural spending “by electorate”, and that Newgate will undertake polling “to establish a benchmark of public opinion and perceptions of the arts and culture sector” and to “test messages with target audiences”.

Time will tell whether the dark arts of spin will translate into lasting impact. The academy’s 2015 efforts on mapping the size and strength of the humanities in Australia were impressive, but did policymakers take any notice? Looking at higher education policy in 2017, you’d have to say no. Education Minister Simon Birmingham still wants to cut funding to universities, which will obviously hurt the humanities, while Labor remains entranced by the lustre of STEM.

The new lobby group also faces a tricky dilemma when it comes to attitudes to the arts among ordinary Australians. The very idea of arts funding still faces ingrained hostility from many voters and politicians on the right. At a time when politics is fiercely fought on cultural battlefields, the difficulty for those seeking to champion culture is that artists are increasingly seen as partisan players belonging to the left.

Recent Australia Council data shows how difficult the task will be. The Australia Council’s new participation data, released in June, showed a significant decline in popular support for arts funding and public culture, including on issues like the value of culture, the role of culture in education, and the contribution that artists make to our society. 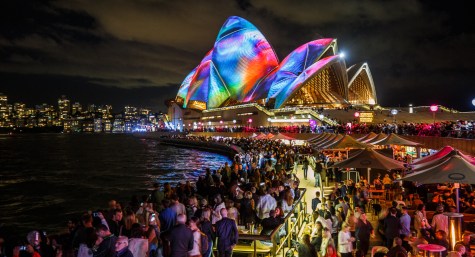 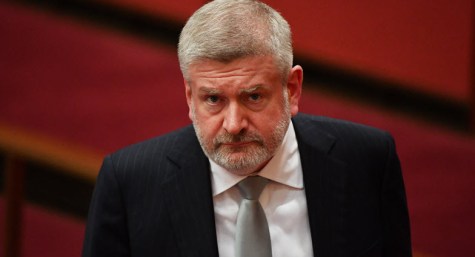 The Academy is an excellent organisation that does very good work, but it’s been more than 10 years since it had any real impact on public policy. I’m sure the new organisation will produce some excellent research, but I seriously doubt whether it will have the clout or expertise to advocate effectively to politicians. I hope I’m wrong. It would be a terrible shame for such a good initiative to fall short.

Wasn’t Newgate a hell-hole into which people disappeared, only emerging, if at all,to be executed?
Sounds appropriate.
Artz wiff a flow chart – yeh, that’ll work.
If’n yer not starving in a garret, it ain’t art.