Guess who's turned up a list of donors to an anti-marriage equality group?

Former Labor senator Joe Bullock, who resigned from his role in Parliament because of the party’s platform to commit to a binding vote on marriage equality in 2019, has been revealed as one of the donors to the No campaign.

The National Civic Council, a conservative Christian lobby group founded by B.A. Santamaria in the 1940s, publishes a weekly magazine called News Weekly. The September 9 edition features a list of donors to its campaign to fight against marriage equality, which includes Bullock, with a donation of $100. The “fighting fund” is off to a flying start, according to the National Civic Council, with a total of $49,473 listed as donations so far.

The list of donors runs across two pages and includes reverends, the Carmelite sisters of Victoria and some businesses, although it is mostly personal donors. The National Civic Council’s donation push is separate to that of the Coalition for Marriage, the umbrella body led by the Australian Christian Lobby’s Lyle Shelton. The Coalition for Marriage has its own donation campaign. 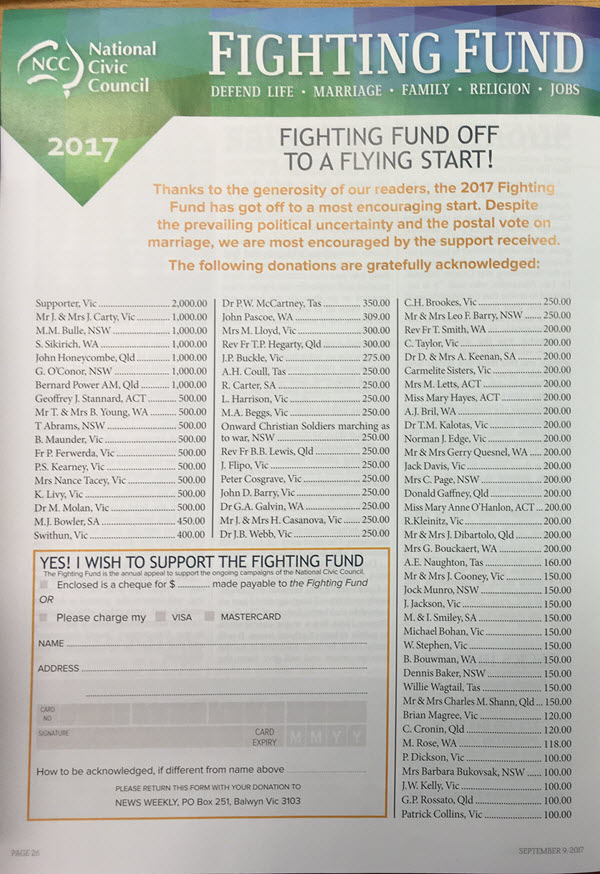 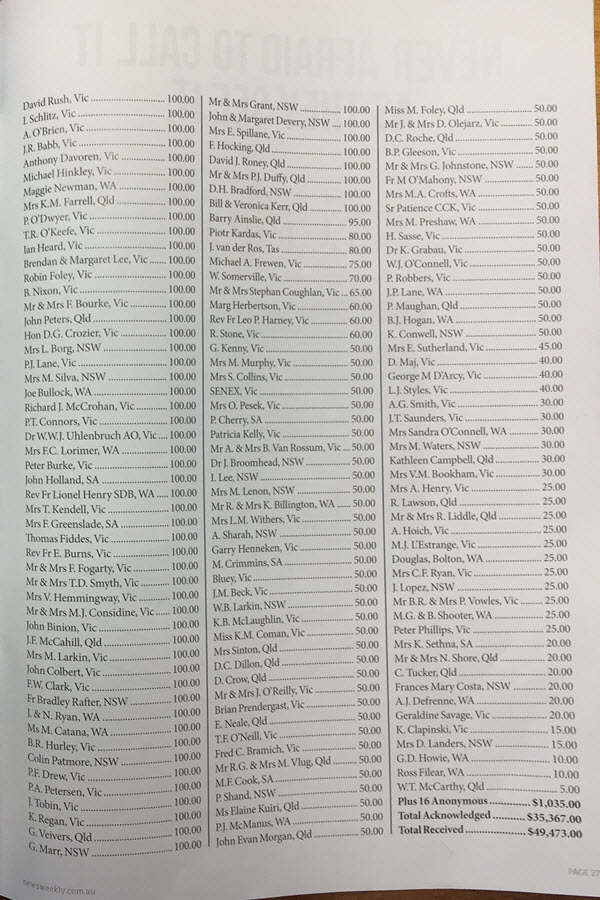 The area of donations to both sides has been fraught in the lead-up to the postal vote, with both sides of the debate claiming they will be outspent, and because the survey is run by the Australian Bureau of Statistics, laws around donations may not apply.

While the campaign in favour of marriage equality has a long list of big name corporate backers, none of those have actually made big donations to the cause in the past two years, The Guardian reported on the weekend. Qantas boss Alan Joyce has said that he will make a substantial personal donation.

Lyle Shelton told Fairfax last month the No campaign would focus on donations from “mums and dads”: “”We don’t have the support of corporate Australia like other [pro-same sex marriage] groups. This is a David v Goliath battle.”

The Greens have been criticised today for a website which asks for money for the marriage equality cause, but redirects to a general party donation website. A spokesperson says that while the funds will be in the same account as other donations, the money will be spent on the specific cause.

The magazine that includes Bullock’s donation also has a cover story by Chris McCormack titled “Our unsafe schools are putting students at risk” and it links the number of sexual assault incidents in schools with the Safe Schools anti-bullying program:

“The ‘Safe Schools’ program began in Victoria in 2010 and in NSW in 2014. Is the fact that Victoria was the first state to adopt the “Safe Schools” program a factor in the abnormally large proportion of Australian student-on-student sexual assault cases reported in that state?”

It then links Safe Schools with the upcoming postal survey:

“Once enacted into law, transgender “marriage” cannot be treated “less favourably” than heterosexual marriage. Transgenderism will be required teaching in schools and students identifying as other than their biological sex will legally be able use the toilets, changerooms and showers of the opposite sex and compete in sports teams of the opposite sex: for example, boys competing against girls as part of a girls’ football team.”

Former Labor “Minister”, are you sure?

Why is this a story? I’m sure a lot of people from various backgrounds will vote no. I’ve never heard of this guy before today but he has every right to vote no. Just for the record I’ll be voting yes (so don’t bother flaming me as I don’t care).

He is catholic bigot from the Shoppy’s union, a diehard from the old school, and it is sad the Labor party is still infested with the likes of him – separation of powers and all that.

Ah ok. So is the issue that he is a catholic or a unionist that makes it worthy of note?

Neither, really. He is a Shoppy; that is the problem. Nothing wrong with being an unionist, nothing wrong with finding moral guidance in ancient texts. But misrepresenting poor underpaid shelf-stackers on social issues and make sweetheart deals with the big retailers that fail the “better off overall test” – epic fail by the SDA. The ALP must let these political lepers go.

That Opus Dei ratbag is no more Labor than the misanthropes Bob Santamaria or Kevin Andrews.
On must take issue with the common misuse of the term “conservative”. Conseervatives seek conservation of our natural, built and social environment. Reactionaries have hijacked the honourable term conservative and journos should be more committed to the English language. And while they’re about it they should not use the ugly noise “Myanmar”, imposed by a bunch of murderous thug brasshats, in referring to the country properly named Burma, or “racist” in reference to opponents not of a race but of an artificial ideology.

Not all Roman Catholics are theocratic homophobes, but there’s a statistical link. Check where the Abbott rump in the LNP got their childhood indoctrination

How about a little balance…could we have a list of L/NP politicians, passed and present, who publically state they will be voting ‘NO’?
I’ll hazard a guess it will be more than one!!

Sorry…that should be ‘past’.

The list of donors includes Digby Crozier, a minister in Victorian Liberal governments. He would be one of the few non-catholics on the list.
It is a bit rich for a Catholic publication to claim safe schools is putting children at risk. After the revelations of the Royal Commission it seems that safe schools may not put as many children at risk as being close to a priest or brother.