Clash of the titans. Many Crikey readers would be aware that Labor Senator Sam Dastyari is running a Senate inquiry into the future of public interest journalism, which has turned into a quasi investigation of the possible effects of the amendments to the government’s media reform bill proposed by independent Senator Nick Xenophon. Xenophon is keen on an inquiry into Google and Facebook, and tax breaks for smaller media companies to offset the concentration of media influence that would be made possible by the abolition of the two-out-of-three rule. Crikey readers may not be aware that our very own editor Cass Knowlton appeared at the inquiry last month, which led to this exchange, where senators Dastyari and Xenophon were shocked to learn just how small the Crikey editorial staff is:

Knowlton told the committee that tax breaks or tax deductibility status would make a significant difference at Crikey. And now members of the government seem to have gone cold on the idea, after a column by Darren Davidson in The Australian that said Crikey could benefit. Today a news story in the Oz has the headline “NXT plan ‘may help’ media web titans,” and a couple of lines in we discover that we are in fact one of the titans!

“Government MPs yesterday expressed concerns about the measure, which they fear could benefit organisations such as the Guardian, Crikey and Buzzfeed rather than regional newspapers.” 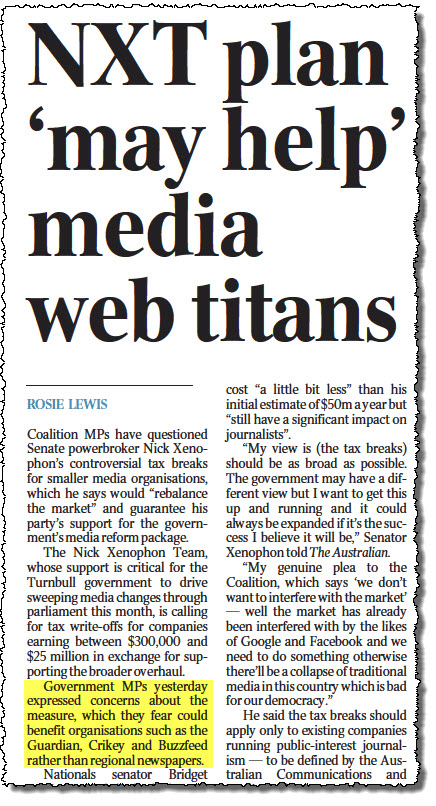 Now that Ms Tips is writing for a “media web titan”, we think a pay rise is in order. And we seem to have risen in the estimation of the Oz, which has previously called us a “leftist newsletter”.

Take that on notice. As readers will be aware, Crikey likes to point out the foibles, for want of a better word, of Queensland’s One Nation Senator Malcolm Roberts, who may or may not be a senator much longer. But to offer some due credit, Roberts actually used question time yesterday to make a valid point about indigenous programs:

“I have just come back from a nine-day road visit to [Cape York], visiting all communities except Aurukun, where a planned visit was postponed due to sorry business after two deaths in the community. I listened to people across the cape and learned much about what is lacking in the area and I felt the enormous commitment locals of all races have together to taking opportunities for regional development. Senator Scullion, as Minister for Indigenous Affairs, are you aware that many traditional owners or custodians across the cape feel left behind by the Indigenous Affairs hierarchy — that is, the Commonwealth funded and state funded agencies and bodies? Are you aware that people are crying out for locally driven solutions to social and economic challenges because real, practical outcomes are not possible under current programs, as shown in the appalling results in the latest Closing the gap report and in the lack of practical resources for seizing community opportunities?”

It’s impossible to disagree with Roberts, especially in an area like health, where such a massive gap continues between indigenous and non-indigenous Australians: the only health programs that generate results among Aboriginal Australians are ones developed and run by local communities and by Aboriginal medical professionals and health officers. That he’s made the effort to go and listen to local indigenous communities reflects far better on him than a lot of the racist garbage that spews out of the mouth of his leader.

Riders of Reason. Late last month, Crikey reported with a heavy heart that minor party and headline writer’s goldmine The Sex Party was changing its name to Reason Party, to reflect its widening “centrist” policy base and attract a broader range of votes. The re-branded party has snagged its first converts in the Australian Cyclist Party. The ACP put out a press release yesterday morning pledging to contest the next federal election by “supporting the Reason Movement and its forthcoming application as a federal party”. The merger is reportedly only at a federal level for now, with the party holding ongoing discussions for what this means at state level.

The release mentions that the ACP has fielded more than 50 candidates across various state and federal elections, including in Western Australia, where the party was advised by (who else) minor party “preference whisperer” and ultra-distance cyclist Glenn Druery, shortly after he fell out with the Australian Motoring Enthusiast Party. Sadly it was not to last for Druery and the bikers — he and party president Omar Khalifa also fell out, and they traded opinion pieces in Fairfax after the election. Perhaps the union between the ACP and Reason can go the distance.

5 thoughts on “Tips and rumours”