Wolf: Assange is a feminist-baiting techbro douchebag (and I’m done with his bullshit)

Look, you may ask why on earth I’d care what some silly man stuck in an Ecuadorean embassy has to say about women’s rights, but once upon a time I was a rather strident supporter of WikiLeaks, writes freelance journalist Asher Wolf.

Excuse me, but what the actual fuck? Assange has personally managed to contextualise the entire existence of women and immigrants in relation to their worth to national GDPs as pot scrubbers and and baby breeders. 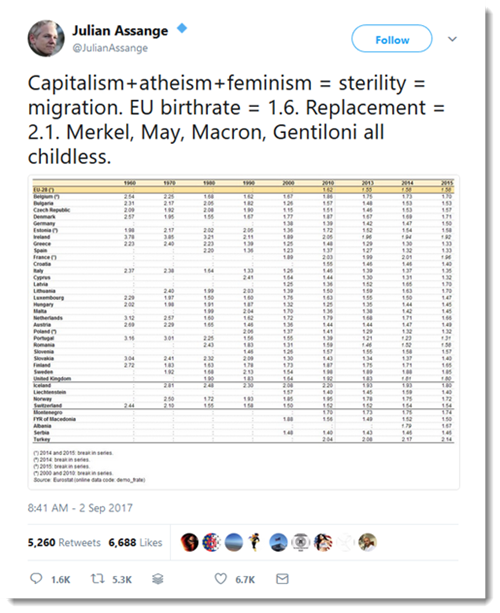 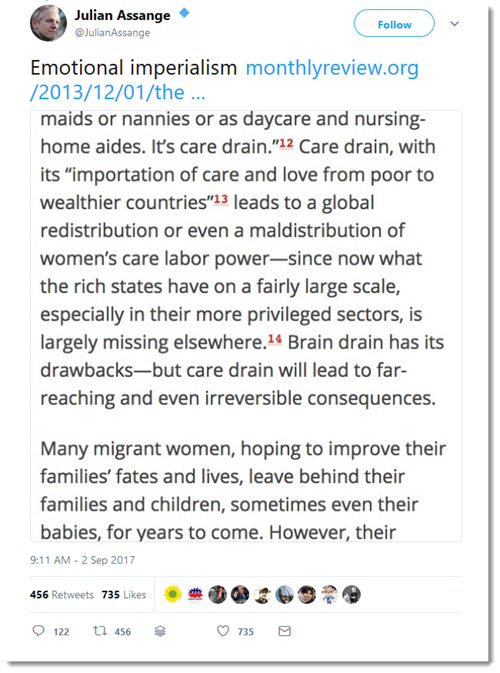 Of course, it’s taken me a few days to respond to Assange’s idiocy, but then I was doing what so many other Western feminists do when not engaged in paid work: the physical and emotional labour of domestic care-giving. And I don’t know about you, but I don’t have an immigrant maid sweeping my floors.

As a sole parent, that doesn’t really leave lot of time for “emotional imperialism” at all, to be honest. Maybe I’d have more time for doing what men in Assange’s circle prefer to describe as being a “thought-leader” on the panel circuit and book writing if I had accessible, affordable, quality childcare available at my leisure.

Look, you may ask why on earth I’d care what some silly man stuck in an Ecuadorean embassy has to say about women’s rights, but once upon a time I was a rather strident supporter of WikiLeaks — and much of my support ended because of Assange’s behaviour.

Anyway, I’m now taking the hour between work and picking up my kid from school to write a giant “fuck you” to Assange douche-bro shit-baggery.

Dear Assange: terming women’s intellectual engagement with the world outside the home as “emotional imperialism” is a giant big crock of shit.

There’s nothing less self-actualising — let alone world-changing — than doing unpaid grunt work for a bunch of ungrateful brutes. No wonder 40% of Australian women have been diagnosed with depression or anxiety: we’re earning 15.3% less than men on average here in Australia. It’s kind of hard to find the to time to focus on self-care — let alone inflict “emotional imperialism”  upon the world — when you spend your time at work being underpaid and your “free time” working uncompensated to care for your family as well.

And frankly, no amount of “HALLELUJAHS!” and “PRAISE THE LORDS!” can put me in a procreating mood after working two jobs to pay the electricity bill. It’s difficult to form sentences after hours of work topped off by scrubbing dishes.

Anyway, what is Assange really suggesting here? That Western feminists either have to give up their political and financial agency and stay home to do the bum-wiping free of charge — or have low-paid immigrant labor do the care work for us instead? What’s Assange’s great big fear here? That if women stay in the workplace we’re engaging in privileged “emotional imperialism” by using our brains rather than birthing and caring for bouncing white babies? That immigrants will produce more babies than white women? That women in Western countries have to choose between having the right to an intellectual life or a white society? Ewwwwww.

Assange’s tweets are a giant two-handed flag-wave at racist Nazi anti-immigration sentiments. No surprise, Assange avoids suggesting there might just be a solution that doesn’t involve exploitation of both women and migrants.

Imagine! A world that doesn’t accept racist scare campaigns against immigration. A society where women and under-paid immigrants unionise to fight for fare wages and state-funded quality, affordable childcare? A society where men play their fair part in care work in both the workforce and at home. It’d be a structural revolution, an equitable, feminist society that would render Assange’s false dichotomy obsolete. A world where we don’t need to martyr people to fulfill the needs of white male techbro libertarianism that never gets off the fucking couch to wash the dishes and do a load of laundry.

Assange knows he’s signalling to disaffected men, angry divorced dads and disassociated teenage gamers, and he doesn’t care. He’s looking for allies to keep his personal operation afloat and alive, no matter how rat-fucking racist his new buddies may be.

The pathetic irony is that so many non-male identifying individuals have provided costly and vital work to support Assange: not just care work to keep him physically alive, but also technical, public relations and legal support, as well as many of the document drops that have kept WikiLeaks functional over the years. But for the most part, women and non-binary identifying individuals have been largely obscured from public view and record of WikiLeaks’ history. And yet Assange would not have lasted this long without the support of many diverse individuals enabling his operations to continue despite his current captivity of sorts.

Women don’t want to be men’s personal “marthas”, “handmaids”, virtuous wives, God’s police or damned whores. Immigrants don’t dream of a life of low-paid work in shitty care roles for obnoxious arseholes. We all dream of something better. But Assange isn’t offering up options that involve anything other than drudging slavery, and the rolling back of rights.

Assange is an ageing techbro in an ivory tower claiming the world is filled with meanies who should quit dreaming of a better life, while he winks at the racist, misogynistic arseholes who are marching in the streets with tiki torches and swastikas.

Assange’s greatest tactical mistake is to treat public support and goodwill as a perpetually renewable resource. It’s a losing tactic. Just take a look at Assange’s personal mentions on Twitter: it’s a never-ceasing chorus of people screaming at him to log off. Wonder why. 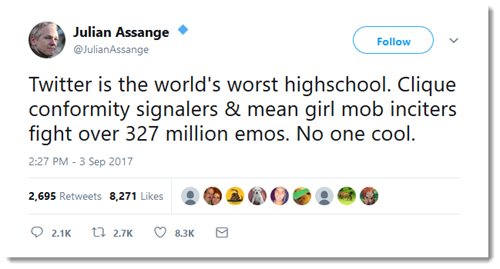 Anyway, it appears that Assange now has all the feels over the fact that barely anyone of decent moral fibre wants anything to do with him at all. I’d offer him some “care labour” but I’m all done with giving my talent away for free. Maybe Assange will have to clean his own shit up for once — but don’t hold your breath.

Assange’s detention drags on with no resolution in sight. What’s next?

Did Assange just offer proof that he is guilty of raping two women?

Perhaps Assange may adopt the dying art of letter writing by hand. It’s time-consuming (he has plenty of time) & has the added benefit of offending considerably fewer readers.

No, Asher. Don’t stop. Tell us what you really mean!

You could’ve covered Vault 7 (Google it).
Or reminded people that CryptoParty still exists (wait – does it still exist?).
But no, you’re right; clickbaiting about a few moronic tweets from a fellow cryptobogan is MUCH more important.

You tell someone to google but then tell Asher Wolf to promote CryptoParty. Thinking. Emoji. Face.

Could I have a precis of that? I don’t speak Emoji.

Assange is a Nazi, you shriek? Yes, that’s perfectly reasonable.