Today in Media Files, Alan Jones has taken on his old foe Media Watch, The Australian isn’t giving up in a spat with the ABC, and the Cambodian government has banned a newspaper publisher from leaving the country.

Good feud guide. It’s no surprise that 2GB broadcaster Alan Jones is not a big fan of Media Watch — he’s a regular target, most famously in its coverage of the cash for comment scandals. But that’s not enough to stop him watching. While the program was still on air last night, Jones responded to a segment about his spat with 2GB’s owner Fairfax last week by calling host Paul Barry a “boring, pompous, left-wing joke”. 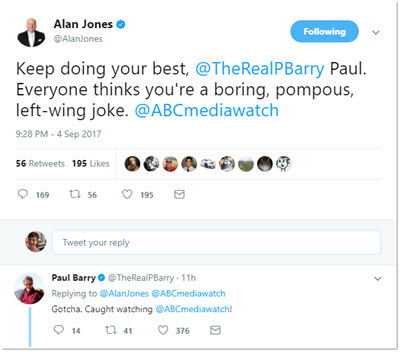 Reflecting reality. The Australian‘s media editor Darren Davidson has doubled down on his claims yesterday that the ABC’s commercial division has been talking with an advertising tech start-up NewsMaven in “an effort to grab a bigger share of advertising dollars”. In response to Davidson’s story yesterday, the ABC put out a statement asking for the story and headline to be amended to “reflect reality”. Instead, Davidson published another story yesterday afternoon, saying he stood by the story, with fresh quotes from NewsMaven saying the ABC had agreed to a trial.

“Hours after the Cambodia Daily’s final edition went to print Monday morning … the tax department issued a statement telling immigration police to prevent the newspaper’s publishers from leaving the country. Based on the tax law, the statement said, ‘the General Department of Taxation requests cooperation with General Department of Immigration to prevent travel out of Cambodia by Ms. Deborath [sic] Krisher Steele and Mr. Douglas Eric Steele, who are responsible, to push [them] to make the payment’.” 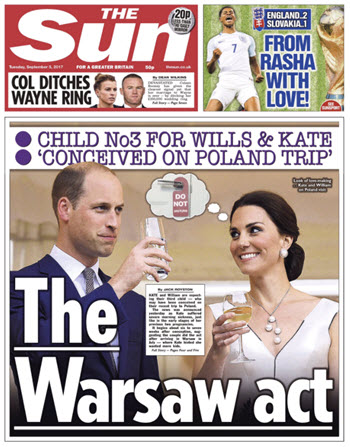 Murdoch wins cricket rights. Here’s something guaranteed to be on Fox Sports/Foxtel in 2018 — the IPL 20/20 cricket competition from India. Rupert Murdoch’s company Star India has just bought the rights for the next five years at more than double the previous price. Star will pay $US2.55 billion for the TV and digital rights. Sony, the present rights holder paid about $US1 billion for the current 10 year contract which has just expired, and had offered a reported $US1.7 billion for the domestic and some international rights. Facebook offered a reported $US600 million for the digital rights. It’s the largest sports rights contract for cricket. Star will be paying more than $US500 million a year against Sony’s $US100 million.

IPL has continued to grow in popularity (an estimated 1.3 billion people watched this year’s competition). The Sony contract was thought to have brought untold riches to the sport in India. Despite the wealth of that contract, there was a match-fixing scandal in 2013, and two teams were suspended from the competition. Those teams — the Chennai Super Kings and the Rajasthan Royals — can rejoin the competition next year.

With its arms of the UK and Europe through Sky (and the huge Indian population in Britain especially), through the rest of Asia through Star, in the US through Fox Sports and Australia through Fox Sports/Foxtel, the IPL will be hard to miss next year. The annual payment under the Star deal would be as much as cricket in Australia might hope for under its new five-year broadcast contract. — Glenn Dyer

Glenn Dyer’s TV Ratings. Nine’s took gold last night — with daylight filling out the podium in second and third. Then it was Seven, then the ABC, then Ten, then SBS. Nine won because The Block was tops nationally with 1.69 million, This Time Next Year was next with 1.20 million, Nine News and their 6.30pm bulletin were fourth and sixth, A Current Affair was fifth. Seven News and their 6.30 part were second and third. The Chase’s 5.30 episode was 10th, Home and Away, eighth. Nine shows dominated.

Seven’s Hells Kitchen finishes tonight. It got 813,000 nationally last night,  which was better than Australian Survivor on Ten —  789,000, but not Have You Been Paying Attention– 935,000. It showed up what was on Seven, Ten (earlier) and the ABC. And that was the night. The ABC beat Ten into fourth, but its performance last night was below par from 7pm onwards.

Bat’s all, folks! Or maybe not. The evolution of the Wuhan lab theory from fringe to Fauci

I luv it,
That pompous self opinionated blowhard thinks that, “EVERYONE thinks P Barry is boring”.
How does it happen that such people as Jones and his ilk manage to put such tickets on themselves, and become the font of all knowledge and depository (suppository more likely) of all wisdom?
At least Barry has a proven audience consisting of all the “media Personalities” in the country. Then there are the rest of us salivating in the hope that he will show them up as what they are. Nobodies with an over inflated opinion of their own abilities and actual worth.

There is a photo of Jones in the dictionary under pompous

Jones is probably still smarting after the Media Watch expose of fawning letters between him & David Flint back in ’97 & ’99. Paul Barry need never fear receiving that tone of correspondence from either of them.

The difference between Barry and Jones is in the thinking and knowing.

….. that and that Jones is a “right-wing joke” of course.

FFS Will, tie a knot in it – the UK does not need anymore bald, big eared, chinless wonders.
It will soon have to make its way in the real world, unsheltered by the EU aegis.