Media reports like the phrase "once in 50 years" to describe catastrophic weather events. But as earth and paleoclimate scientistDr Andrew Glikson writes, those events are no longer rare. And we know why.

As extreme hurricanes and extensive wildfires proliferate around the globe, an internet search suggests that, in reporting these events, the words “climate change” are rare. Some exceptions include the SMH and The Guardian, but numerous ABC reports of the Houston floods have neglected to mention climate change at all (for example here, here, here, here and here).

This contrasts with many reports in international journals confirming the relationship between carbon emissions, global warming and extreme weather events.

There is no lack of claims on climate denial websites to suggest extreme weather events have no relation to global warming — now about 1.5 degrees Celsius higher than 250 years ago — as exemplified by the Global Warming Policy Foundation, or Dr Roy Spencer, or as reported in Jezebel.

It is often stated that single climate events do not necessarily represent the effect of climate change, and statements such as “once in 50 years” are common. But the incidence of extreme weather events has been rising as the Earth warms, as stated by the IPCC (2012 ):

The rise in meteorological and hydrological events is recorded by the Munich-Re institute, as in the figure below: 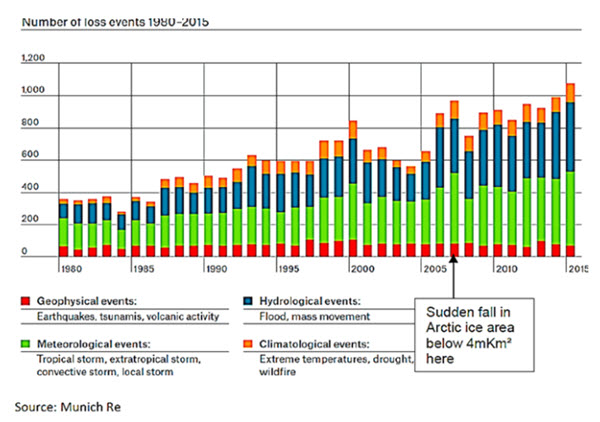 Up-to-date evidence for developments in the atmosphere is presented by NASA. The physics of this trend are elementary: as global temperatures rise evaporation from the oceans increases, forming migrating cyclonic cells. The moisture needs to be dumped somewhere. Lightning strikes ignite forest fires. As temperatures rise hot air plumes migrate from desert regions into cultivated and forest regions, creating conditions for wildfires.

The rise in land temperatures results in an increased frequency and intensity of heatwaves and fires, at a rate about two to three fold during 1980–2012.

According to the extract of climatologists Sefan Rahmstorf and Dim Coumou’s report “Increase of extreme events in a warming world“:

“We find that the number of record-breaking events increases approximately in proportion to the ratio of warming trend to short-term standard deviation. Short-term variability thus decreases the number of heat extremes, whereas a climatic warming increases it.”

Similar anomalies were reported by Hansen et al. in 2012, stating:

“The distribution of seasonal mean temperature anomalies has shifted toward higher temperatures and the range of anomalies has increased. An important change is the emergence of a category of summertime extremely hot outliers, more than three standard deviations (3sigma) warmer than the climatology of the 1951–1980 base period. This hot extreme, which covered much less than 1% of Earth’s surface during the base period, now typically covers about 10% of the land area.”

None of the above appears to trouble law makers in the most heavily carbon polluting nations, including Australia, in the process of opening coal mega-mines and exporting more than twice its domestic carbon consumption, where the total carbon emission from combined domestic use and export is one of the world’s highest.

“Media reports like the phrase “once in 50 years” to describe catastrophic weather events. ”
Unfortunately the probability terminology used by the weather experts is typically misinterpreted by the media, and then everyone else. “Once in 50 years” is actually meant to say “one in fifty chance of occurence in a calendar year” but gets abbreviated to the above, implying that once its happened, it’ll be 50 years before it happens again, which is not the case. If a single event happens, then another, and then another, in the same year, they all still have the same likelihood of occurence, ie 1/50 chance that year, but if more and more occur, the statistical base is revised.

We need to understand that its not once every x years that its expected to happen, but a 1/x chance of happening this year, and again, and again.

The ABC? …. and risk upsetting Rupert, Jethro and their government?

A good example of the ABC being ‘fair & balanced’ – to the degree that reporting is effectively neutered.

Climate change has been used in the negative by scientist & climatology expert Blot who assured his gullible audiences in his multimedia empire that the Houston ‘event’ had nothing whatsoever to do with AGW, then neatly seguing into an attack on carbon reduction.
Samuel Clemens said “everyone talks about the weather but nobody does anything about it” but he had the good fortune of never hearing the Blotster attempting to sabotage this country’s climate policy.