What do companies that pay less tax do with the money? The US experience is that little of it goes to investing in new jobs. Instead, CEOs benefit.

A new US report suggests that the tax cuts the government is anxious to give to large companies will end up in share buybacks and larger CEO remuneration rather than new investment and new jobs.

The Turnbull government remains committed to giving Australia’s, and the world’s, largest companies a huge tax cut that would drop their tax rate from 30% down to 25% over the coming decade, at a cost of over $60 billion in foregone revenue. The government, and business lobby groups like the Business Council of Australia — whose members already pay, on average, less than 25% tax — insist that the tax cut will increase investment, increase economic growth, increase employment, increase productivity and increase workers’ wages.

However, a report released last week by the progressive Institute for Policy Studies in the United States examined more than 90 of the biggest and most profitable US corporations that paid well below the headline US company tax rate of 35%. The list includes giants such as Exxon, AT&T, Boeing, FedEx, GE, the big defence contractors and major banks, which use tax loopholes and tax concessions to achieve tax rates often in single figures. The study found that, rather than being associated with higher jobs growth, the companies were associated with job cuts: the median job growth for the firms over the period 2008-16 was -1% compared to 6% for US private sector firms as a whole. 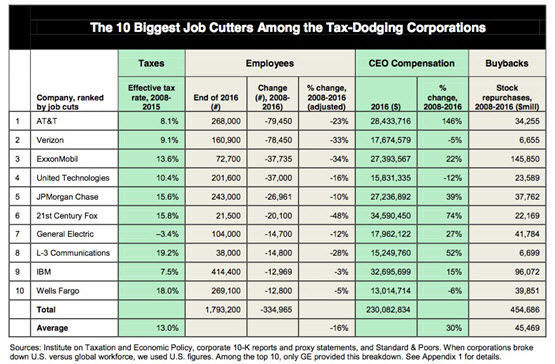 So where did firms direct the higher profits they retained from paying less tax instead of job creation? According to the report, “over the 2008-2016 period, the top ten job-cutters in our sample each spent an average of $45.5 billion repurchasing their own stock, six times as much as the S&P 500 average of $7.4 billion.” This, in turn, helps drive up CEO remuneration via share options and stock price-based performance pay. According to the report “The CEOs of the 48 companies on our list that cut jobs while avoiding taxes collected even larger paychecks. In 2016 their total compensation averaged $14.9 million, 14 percent more than the S&P 500 average of $13.1 million.” That represented an 18% rise in real terms, compared to 13% for S&P500 CEOS.

The report backs up a 2014 National Bureau of Economic Research paper that found that, while company tax increases lead to reduced economic activity, there was little evidence that cuts had led to increased activity, unless implemented during a recession.

A report from the US Congressional Budget Office in March showed that Australia had one of the lower average corporate tax rates in the G20, discrediting the argument that we needed to cut company taxes to stop capital moving to other countries with lower tax rates.

Just reinforces that the Libs are in thrall to the Corporate end of town. Their economic mismanagement is already proof of that. It’s all smoke and mirrors trying to scare us about terrorists under the bed and homosexuals in it. The scary thing is that a lot of us have fallen for the crap. Wake up Australia and kick the Government out of its bed before we all get bed bugged to death.

It’s all such transparent rubbish, but if you have a media mogul who pays no tax supporting it then you have a solid chance of promoting these obfuscations.

Employment rates and investment decisions are only marginally, peripherally associated with tax rates. It is a lie, always was.

I want to know what Turbott and his travelling circus (Little Eejit et al) is going to do if this snake-oil doesn’t grow the employment strands on the billiard ball of the economy, that he’s promised it will.

Turnbull and Co are well aware of the source of the really big LNP donations (and post politics job offers), and are perfectly comfortable lying through their teeth about it.

Surprise, surprise. It’s astonishing how this hogwash of tax cuts creating jobs is accepted as fact. The Labor party should condense a few of the statistics presented in this piece – put it in layman’s language & hammer the point to the public.

Will
Reply to  zut alors

What on God’s good Earth makes you think for a single microsecond that the Labor Party cares about the layman? They gave up on the layman decades ago! Now, they’re solely about chasing the financial support, undemanding votes, and best of all board appointments, that traditionally only Liberal-supporting cohorts got a shot at. Hence, Labor won’t oppose these tax cuts as unjust; they’ll oppose then as unpopular. The only thing that matters to them is what sells. And guess which cohort they got that idea from?

Alas, too true.
When/if bumBoilShlernt and his apparatchiks attain office, there will not be an iota of change.

So keep an eye out for anyone suggesting a “tax cut” for the lowest earners, by raising the tax-free threshold. That’s someone who doesn’t believe in trickle-down economics.