The ABC has demanded an apology and correction from The Australian over a story run in its media section today.

Today in Media Files, AAP will close its south-east Asia bureau by the end of the week, and The Cambodia Daily says government pressure has forced it to close.

AAP to close south-east Asia bureau. Australian news wire service AAP is closing its Jakarta bureau by the end of the week. AAP editor-in-chief Tony Gillies said the decision was commercial, and south-east Asia correspondent Lauren Farrow would continue to file as a freelancer, but AAP hoped she would return to Australia as a reporter. Gillies said the agency would parachute reporters into the region to cover significant and breaking news, and would send reporters with leaders and sports teams when required. AAP has had a bureau in Jakarta for 35 years, and local staff — an office manager and fixer, a driver and a housekeeper — would lose their jobs, Gillies said in a note to staff last week: “They have been described as family by everyone who has worked in that office. While they are sad to be leaving the company, please know that each has been treated with dignity and have been well cared for.”

AAP will have an Asia desk based in Australia, which will co-ordinate freelancers, curate content from international news wires and look for news leads. AAP still has offices in London, New Zealand and the US.

Government forces closure of Cambodia Daily. Independent Cambodian newspaper Cambodia Daily has printed its final edition, saying government pressure has forced it to close. In a front-page story announcing the immediate closure, the paper said the paper had been targeted by the government “with an astronomical tax assessment, leaks and false statements by the tax department and public vilification by the head of government before an audit, much less a legal proceeding”.

“The power to tax is the power to destroy. And after 24 years and 15 days, the Cambodian government has destroyed The Cambodia Daily, a special and singular part of Cambodia’s free press … The allegations of theft are unfounded and defamatory. The campaign of leaks is unprofessional and unlawful.” 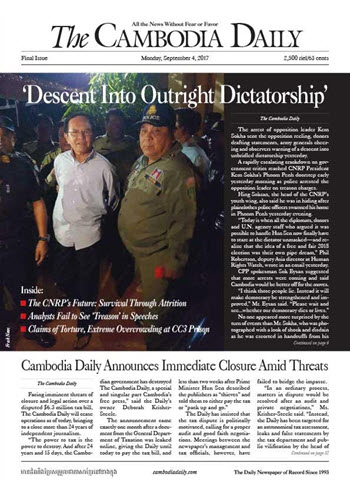 The revolving door. The Australian‘s national crime reporter Dan Box has finished up at the paper to return home to Britain. Box finished up on Friday after his multimedia investigation into the prosecution of Zak Grieve in the Northern Territory was published last week. He also worked on the Bowraville investigation podcast, which won two Walkley Awards last year.

Happy birthday to AM. The ABC’s flagship current affairs radio program AM celebrated its 50th birthday this morning. A retrospective story on today’s program recounted the stories from the first program that went to air in 1967, and some of the biggest news stories it’s covered. Some of the program’s iconic moments, including Mark Latham’s infamous handshake with John Howard outside the AM studio, have been brought together on the ABC website here.

Video of the day. Comfort was key for this guest on Al Jazeera’s Arabic channel: 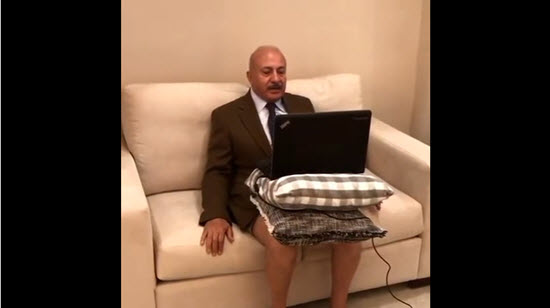 Good feud guide. The ABC has demanded an apology and correction from The Australian over a story run in its media section today. The “exclusive” story reports that the ABC’s commercial division opened talks with an advertising tech startup in “an effort to grab a bigger share of advertising dollars”. But the ABC says the story is incorrect: “The ABC has requested Darren Davidson amend the report and headline to reflect reality.”

Media groups fall from ASX200. It’s no wonder Isentia Group and Sky Network Television NZ  are about to depart the holiest of holies for listed Australian companies the ASX200. Both are leaving because their market valuations have plunged to a level where they no longer qualify. The ASX200 is a benchmark index consisting of the 200 largest companies by market capitalisation listed on the ASX and investors of all sizes structure their investments according to the membership of the index. Since the start of the year, Sky TV’s share price has dropped more than 43% to last Friday as it failed to merge with Vodafone NZ, reported weaker results for its interim and June 30 year and saw a slump in subscriber numbers. Its shares fell nearly 20% last week alone. Isentia’s shares only dipped 3.5% last week as it confirmed very weak results and the write-off of the $48 million spent buying a company called King Content. But since the start of the year the share price has slid more than 38%. — Glenn Dyer

Glenn Dyer’s TV ratings. Another win for Nine as viewers deserted Seven’s Little Big Shots. The first episode had 2.61 million viewers (1.67 million in the metros) and last night managed 2.07 million — a loss of more than half a million. The Block managed 1.71 million nationally — and with sold efforts from the 6 to 7pm news and 60 Minutes (though beaten nationally by Seven’s Sunday Night), Nine won the important main channels while Seven narrowly won total people in the metros. The ABC beat Ten into fourth spot in both total people and the main channels. Australian Survivor was 10th nationally — beaten by The Block, Little big Shots for part of the time and Grand Designs.

So the Logies are on the market? Well, all it is really is a change of casinos — from Melbourne and Packer’s Palace to perhaps Sydney or the Gold Coast or Brisbane. Melbourne was always desperate for it because in TV it was a branch office town and all the networks and major production companies were based in Sydney. And for the network bosses it was always an excuse for a very long, sleep-deprived weekend, fueled by booze (and other substances) that started with a midday flight to Melbourne on Friday and a late Monday return. And this morning on Today Karl Stefanovic told us he is upset they are leaving Melbourne — scene of one of his greatest TV moments in 2009. — Read the rest on the Crikey website