“As a journalist, Michael was the consummate professional. He had great contacts, a razor sharp news sense and never lost his zeal for calling those in authority to account. As a friend, which he was to many who worked with him in SMH sport and in the wider sports community, Michael was generous, funny and fiercely loyal. He will be sorely missed personally and professionally.”

A new Conversation for Indonesia. Academic news and commentary website The Conversation will launch an Indonesian edition next week. The Conversation now has editions in Africa, Canada, the UK, France, the US, and a global edition, and was founded in 2011 by Andrew Jaspan, who was forced out as editor-in-chief earlier this year.

Forecasting more weather news. The ABC has announced a new weather vertical across all platforms funded by a regional funding package it announced in March. In a press release, the public broadcaster said ABC Weather would provide science-based weather stories with increased video, online and mobile coverage. The ABC announced the $15 million in regional funding as part of a restructure. 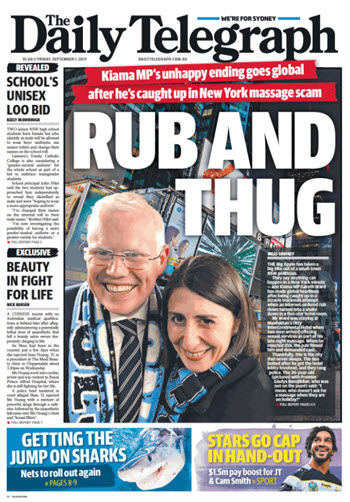 Glenn Dyer’s TV ratings. Nine’s night — but forget that because it is clear the expensive revamp of The Footy Show is going to dust before the network bosses’ eyes. Melbourne has fallen out of love with Eddie, Sam and the others.  So down, down, down she goes — the Melbourne audience is now 43% lower than its opening figure on August 10. The program averaged 218,000 in Melbourne last night against 381,000 for the relaunch. Overall, the regional audience of 93,000 is unchanged from the August 10 figure, while the national audience last night of 343,000 was down 229,000 or 36.7%. That’s getting towards terminal.