The inquiry has been underway since May 2016, but in July the ABC published documents detailing serious and comprehensive claims of possible war crimes in Afghanistan. One alleged incident involved then-SAS captain, now-federal Liberal MP Andrew Hastie, who learnt of the practice of cutting the hands off dead Taliban forces, banned his men from doing it and reported it up the chain of command. Other reported incidents involved the killing of civilians and subsequent cover-ups.

The inquiry is being headed by New South Wales Supreme Court Judge and Army Reserve Major General Paul Brereton. “Whether you saw something yourself, or heard others talking about it, we would like you to contact us,” Brereton said this morning.

Who dares wins? Former PM Tony Abbott will be the star speaker at a climate sceptic think tank event in the UK next month, speaking on the topic “Daring to Doubt”. The Global Warming Policy Foundation holds an annual lecture in London, with attendance by invitation only.

The foundation was created in 2009 in the lead-up to the Copenhagen Climate Summit, by British Lord Lawson and Dr Benny Peiser. The group says it has no official position on climate change but does believe ” this issue is not yet settled”.

“Above all we seek to inform the media, politicians and the public, in a newsworthy way, on the subject in general and on the misinformation to which they are all too frequently being subjected at the present time.”

We’re sure this speech will have a very helpful effect as the government attempts to come to a position around a Clean Energy Target. 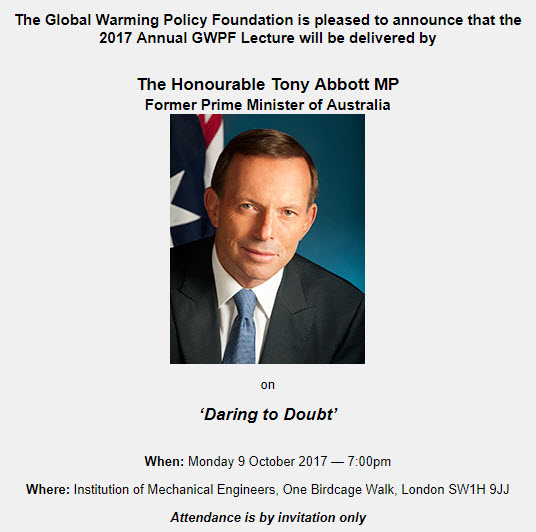 Bankers will be bankers. We know bankers are less than happy with all the kicking the government has been giving them lately (the “South Australia needs jobs, not a banking tax” ads playing endlessly on Sky News ensure we never forget), but are the titans of industry planning to fight back? A Crikey spy tells us this intriguing anecdote:

“As heard in a very exclusive gentlemen’s club among the upper echelons of Sydney’s finance fraternity: a couple of banks are very seriously considering a legal challenge to certain ministerial decisions of the Turnbull government. Among the much slurred banter and anti-regulator bashing, loose tongues let it slip that even certain specific laws specifically targeting their bottom lines and risk profiles could be challenged depending on a much anticipated High Court decision. Silly drunk and high private school boys, will always be boys …”

Speaking of bankers and climate change. The embattled Commonwealth Bank has a new fight on its hands at its AGM, to be held in Sydney on November 16. It will of course be facing shareholder criticism on a number of fronts led by the extraordinary money laundering claims from AUSTRAC, and the investigation of the bank’s culture and handling of a host of issues by the key bank regulator, APRA. The CBA will be paying for that inquiry.

But this week, the bank issued a short statement revealing that a small group of shareholders have asked for a resolution to be put to the November meeting that will, if passed, extend the directors’ duties into a challenging new area of responsibility. It reads:

“That, at the end of clause 12 ‘Powers and Duties of Directors’ the following new subclause 12.4 is inserted: ‘In the exercise of their powers and duties pursuant to clause 12.1 (a) the Directors shall ensure the business of the company is managed in a manner consistent with the objective of holding global warming to below two degrees Celsius above preindustrial levels.’”

The bank said the shareholders making the requisition represent “approximately 0.0077% of Commonwealth Bank’s shares on issue”.

Claws out after ‘lobster with a mobster’. We’ve previously reported that former Kevin Andrews staffer Nick Demiris was being considered to replace Simon Frost as campaign director of the Victorian Liberals after Frost joined the federal branch of the party. We’ve got word that the job is locked in, which means there is no end in sight to factional battles inside the Liberals, which is probably a distraction from trying to win government from Labor’s Dan Andrews. In comings and goings in the party, Barrie McMillan, the party official who was recorded organising donations from alleged mafia figure Tony Madafferi (of “lobster with a ‘mobster'” fame) to party leader Matthew Guy, has been told to resign from the party completely, after a vote by his local electorate council.

A Christmas present for Dutton. Australian artist Ben Quilty is working on a book with Syrian refugee children, using their artwork. Quilty, an Archibald prize winner and official war artist, last year traveled with author Richard Flanagan to Europe and the Middle East to document the plight of Syrian refugees for a book published last year. Speaking at the Storyology conference in Sydney yesterday (in a session with his cousin, war photographer and Walkley-winner Andrew Quilty), Quilty said: “There’s a universal truth in children’s paintings.” He’s hoping to have the book ready for the seventh anniversary of the Syrian war, early next year, and he’ll be sending a copy to Immigration Minister Peter Dutton.

Big yellow taxi. Not quite a taxi, but the big yellow oBikes littered around Sydney and Melbourne are taking to the great blue with reports that four of the two-wheelers have been recovered from the Spirit of Tasmania. Who could begrudge them? Maybe they just wanted a nip of that famous Tasmanian whisky. Either way, Ms Tips is sure sure this isn’t is the last time the oBikes will be found outside their usual habitat.

Here’s hoping Abbott’s star turn at the climate sceptics’ event on 9 October is cancelled due to unprecedented unseasonably bad weather.

And I guess we are paying for this loathsome turd to fly to the meeting and attempt to undermine the future of the planet.

I’d like to know what visa Abbotrocious is using to enter the UK – if he is being paid for this gig then he cannot use his Oz passport 3 month visa waiver.
Anyone in HM Customs & Excise reading this who could have a quick check?
Lord Lawson, for kiddies, is Nigel Lawson, Thatcher’s most ignorant, arrogant & innumerate Chancellor and she had a few of the species.
He and Lord Bunter the Downer were on R4 a fortnight ago magisterially discussing the current Oz energy imbroglio.
Needless to say they were in furious agreement.

The oBikes in Melbourne are certainly causing some grief with Melbourne City Council threatening to ban them altogether. The oBike app which pinpoints the location of each bike certainly makes for some interesting viewing at times with locations including the middle of the Yarra, Melbourne Port, etc.

Abbott talking to the GWPF…I didn’t know Westminster was in his electorate. Can’t keep up with this boundary changes….

I had to larff re oBikes – everything old is new again.
In the 60s, Amsterdam’s krakkers tried to institute a free bike system, painted white, which the police came down on like the proverbial, claiming that they were stolen – in those far off days not even A’dam had bike reg. plates as do so many cities now.
Given that the ubiquity of two wheels was such that they changed hands for a couple of guilder or a spliff this was pretty bizarre – no self respecting thief could make a living stealing a bike.
Nothing whatsoever to do with the Eternal Bureaucrat fearing loss of Kontrol.
Face it, the Uberisation of society is at hand – only slightly delayed by the inertia of the ‘stranded asset class’.