Meet the No campaign’s Heidi McIvor, with links to the Gippsland Times and a mission from God

A closer look at a vocal member of the No to same-sex marriage campaign reveals a church on a mission to take over the state.

How they’ve captured us, the concerned mothers of the No to marriage equality movement’s first TV ad: Cella White, Dr Pansy Lai and Pastor Heidi McIvor. Yes, that’s right, Pastor. McIvor in particular seems neatly poised for a career in politics, prompting Crikey to take a deeper look at her rather radical beliefs.

Further tips from our readers from reveal McIvor is not just a pastor at the evangelical City Builders Church in Sale, rural Victoria, which promises to see “the Kingdom of God advanced and the region [of Gippsland] changed”, but also married to Julian McIvor, advertising manager at the Fairfax-owned Gippsland Times.

Last week the Gippsland Times defended a bizarre “traditional marriage” advertisement, which spoke of the “flash of light” that occurs when a baby is conceived in marriage. The paper defended the ad as free speech. 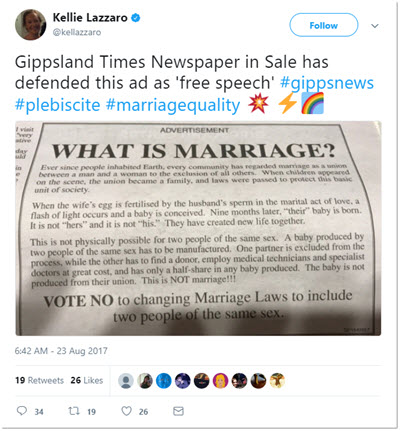 Sources tell us other members of the church are working at the Gippsland Times, part of the church’s efforts to influence local and federal government, particularly Gippsland Nationals MP Darren Chester, whom City Builders Church pastors have criticised for supporting marriage equality.

City Builders do not seem content with a separation of church and state, suggesting on its website “our aim is to raise up strong local churches that work in partnership to influence cities, regions and nations”.

The influence that McIvor and her ilk are seeking in our national debate is not small and it is not limited to the same-sex marriage debate. McIvor will be a name to watch.

‘Take me to your Asian leader’: ethnic communities find themselves at the heart of marriage equality debate

Flash of light? Most bizarre. Don’t recall that one. Is it something to do with the ‘Big Bang Theory’? Creation ‘Scientists’ must have loved that article. For me that sort of crap makes me realise that human beings really know how to stuff up a good religion when they start fiddling with it and adding items that never existed in the source documents.

The government should legislate to protect Australians from religion and it bizarre doctrines.

You trust the government to determine what is and what is not a bizarre idea, Bill? That sort of demand only convinces the poor benighted (and hate-filled) fools that they really are being oppressed by an evil gay conspiracy. Let them make fools of themselves and call them out (kudos to Bhakti – more!).

Christianity has always been the strong right arm of fascism, ever since the Romans adopted it as the official state religion.

There is a belief that we left the Dark Ages behind and reached the Age of Reason and Enlightenment. Christianity, Islam Hinduism etc. It would appear that belief is manifestly false.

is there something in the air or soil of the Cabbage Patch State?
Isn’t that also whence Danny “Catch the Fire” Nalliah comes?
Perhaps the flash of light is the modern version of Gabriel giving the news?