InDaily joins the long list of publications looking to subsidise their operations with philanthropic donations.

Today in Media Files, InDaily has set up a donations platform to support its journalism, following a growing global trend for supporting journalism, and former US vice-presidential candidate Sarah Palin has lost a defamation case against The New York Times.

InDaily asks for donations. South Australian news website InDaily has set up a donation platform so readers can give money to support its journalism. In an article addressed to readers, editor David Washington said that while they didn’t plan to charge for content, “we have become aware that plenty of people in the community would like to support what we do”. They’re using a company called Press Patron, a website that publishers can sign up to and readers can use to make one-off or regular donations. Washington said all funds would be put into journalism for the site. InDaily is owned by SA company Solstice Media, and Washington said it offers an independent alternative to News Corp’s The Advertiser.

InDaily‘s move is part of a growing trend for news organisations using memberships or donations to support their work. The Atlantic announced a membership program last week, and The Guardian formally announced this week a non-profit in the US to make it easier for groups and individuals to make philanthropic donations.

Palin loses New York Times defamation case. Former US vice-presidential candidate Sarah Palin has lost her defamation case against The New York Times. In an editorial published in June, The Times linked Palin to a 2011 mass shooting in Arizona, which it corrected the next day. Palin sued for defamation, but federal Judge Jed S Rakoff yesterday dismissed the claim:

“Nowhere is political journalism so free, so robust, or perhaps so rowdy as in the United States. In the exercise of that freedom, mistakes will be made, some of which will be hurtful to others … But if political journalism is to achieve its constitutionally endorsed role of challenging the powerful, legal redress by a public figure must be limited to those cases where the public figure has a plausible factual basis for complaining that the mistake was made maliciously.”

The Times has put the full judgement online here, and said in a statement the decision was an “important reminder of the country’s deep commitment to a free press and the important role that journalism plays in our democracy”.

‘Fucking idiots’. A Scottish academic who shared a fake photo of a shark swimming in Houston floodwaters on Twitter has told BuzzFeed he knew it was fake, and only meant to share it for a laugh with his followers. Jason McCann describes himself as a journalist in his Twitter bio, but said he didn’t see a problem with sharing something he knew to be fake:

“To be honest, the first thought that went through my head was, fucking idiots …  We are responsible for how we receive the information we’re getting. If people choose to be fooled by a shark swimming by a car, I don’t think it says a great deal about me.” 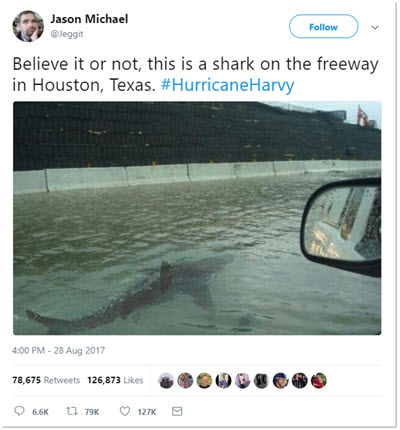 Fox News dropped from UK TVs. Hey Rupert Murdoch, you Sky Fox you. If it is the right thing to do in pulling the corrosive Fox News from Sky in the UK, why not get rid of it from Foxtel in Australia? There is a simple reason or two why the codger won’t follow the surprise decision in the UK with a similar move in Australia. There was only a thin justification for the decision:

“Fox News is focused on the US market and designed for a US audience and, accordingly, it averages only a few thousand viewers across the day in the UK. We have concluded that it is not in our commercial interest to continue providing Fox News in the UK.”

Gee, has it taken 20 years to realise that? The same could be said for Australia and anywhere outside the US where Fox News is broadcast. The overriding reason is the increasing fear the Murdochs have that their name is mud in the UK and 21st Century Fox’s agreed $18 billion offer to buy full control of the European pay-TV group Sky is looking shaky. The British government is still deciding whether to refer the deal for a full investigation.

In Australia Foxtel is 50% owned by News Corp — the associate company of 21st Century Fox which owns Fox News Channel, and News Corp has management and programming control over what appears on Foxtel and especially Sky News which it bought last year. And unlike the UK, News and Fox are not in the midst of a delicate takeover for the rest of Sky that Fox doesn’t own — a bid that is running into rising opposition from politicians, others in the media and ordinary Britons. But there is one big deal involving News Corp and Fox in Australia and that is the injection of Fox Sports into Foxtel to allow Telstra to start exiting the Pay TV company.

Why not a bit of Murdochian symbolism and drop Fox News from the Foxtel channel line up as a precursor to the Foxtel changes? Go on, it will be just as meaningless as the UK move and the justification just as thin. — Glenn Dyer

Glenn Dyer’s TV Ratings. It was Nine’s night, and the ABC again bested Ten in the main channels and snuck into third spot. Nine’s True Story With Hamish and Andy has lost half a million viewers nationally markets since its debut in early June.

Seven axed Ramsay’s Kitchen Nightmares USA and ran a second episode of its own kitchen nightmare — Hell’s Kitchen at 9.30pm. HK had 839,000 viewers for the first episode and 769,000 for the second. Host Marco Pierre White looked bored. Ten’s Shark Tank — 639,000 nationally — sank. Would any of the “entrepreneurs” on the panel buy a show whose audience has fallen like ST’s has? ABC’s The House at 8pm stood out, both in content and viewers with 898,000 nationally at 8pm. Tonight, watch Mad As Hell and Utopia — both on the ABC.