Malcolm Turnbull's Snowy Hydro 2.0 is a couple of small announcements masquerading as a "gamechanger" in energy policy -- one the Productivity Commission fears will be a white elephant.

The Prime Minister’s “Snowy Hydro 2.0” project began life as an attempt to influence Newspoll — specifically, in response to what Malcolm Turnbull saw as a blatant effort by Tony Abbott to influence Newspoll against him in February. The idea was, we learnt via Senate estimates, cobbled together in two weeks in March, so that Turnbull could announce the project on March 16.

Despite talk about it costing $2 billion and adding 2000 megawatts of energy in a “game changer” for the east coast electricity grid, the March announcement was only for a $29 million feasibility study, to be finished by the end of the year. Since then, there’s been constant confusion about the numbers. There was no specific funding allocated for the project in the May budget — as the Herald Sun noted at the time. Treasurer Scott Morrison did offer to purchase the stakes of the NSW and Victorian governments in the Snowy Hydro company, for an unspecified cost (which wouldn’t affect the budget deficit, as being an asset it would be on the capital account). But there was no money for the $2 billion it had been estimated the project would cost. This wasn’t surprising, as what looked like a large-scale commitment to infrastructure spending in the budget turned out to actually be some dodgy accounting around the funding of the inland rail boondoggle, a cut in ongoing infrastructure spending and some nebulous commitments to funding in the years beyond the forward estimates.

Problematically, the cost of the Snowy Hydro proposal then blew out 50% at least, with Snowy Hydro admitting at estimates that it hadn’t factored in an additional $1 billion for the transmission lines required to connect the expanded capacity up to the grid.

Today the Prime Minister was back to, in effect, re-announce Snowy Hydro 2.0, because he needs to be seen to getting things done rather than being bogged down in marriage equality, Tony Abbott’s war against him, citizenship, and whatever is the crisis du jour of this beleaguered government. Inauspiciously, however, a planned drop by Turnbull’s office to News Corp tabloids on today’s announcement was spoilt when Fairfax’s James Massola got wind of it first and spoilt it yesterday. I’ve been saying for a while that Turnbull’s office can’t manage the basics and it will keep hurting them until they learn.

What is the PM announcing as he potters about in the tunnels under the Snowy Mountains? Is he committing to the $2 billion/$3 billion cost of the scheme? Or the $5 billion-plus to buy out NSW and Victoria? Apparently not — if you persevere to the bottom of the cut-and-paste job in News Corp papers, and get past all the numbers being bandied around about 5000 extra jobs and 350,000 MW/h (and a bizarre reference to “the Tumut mountains”, wherever they are), it turns out it’s $8 million in planning funding. Which, by the way, isn’t new money, it’s just been brought forward.

Anyway — I carp. None of this is out of the ordinary for politicians, who love to recycle infrastructure announcements and throw all kinds of confusing figures around to disguise that there’s no new money being spent — and isn’t it nice that in pumped hydro, we have a new metaphor for the endless reuse of infrastructure spending announcements.

[Snowy Hydro to get the poll numbers flowing for Turnbull]

More serious, though, is that if the Turnbull government signs up for the <insert arbitrary figure here> billion dollar project, it will be doing so without any assessment of whether the project makes any sense. It’s only a few weeks since the Productivity Commission, those old economic stick-in-the-muds who love to point out nonsense from governments, noted about both the South Australian government’s energy announcement and Snowy Hydro 2.0:

“Whether these projects will proceed is uncertain, but there is a risk that they will lead to the wrong infrastructure in the wrong place and the electricity consumer will end up paying higher prices as a result. The more that market forces dictate what and where, the less likely that the investments will end up as white elephants… it is important that any proposals be carefully evaluated and that consideration be given to alternatives that might address emerging problems in the electricity market in a more efficient and less costly manner. A risk, otherwise, is that future generations of taxpayers will be called on to foot the bill for precipitate responses to perceived crises now.”

It’d be a hell of thing if that happened to Snowy Hydro 2.0. That would make that March Newspoll the most expensive poll in Australian history. 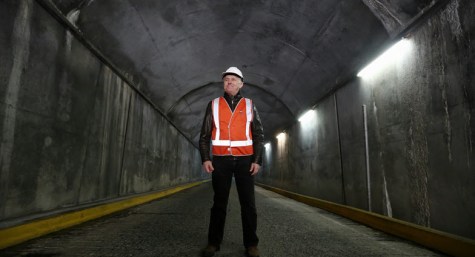 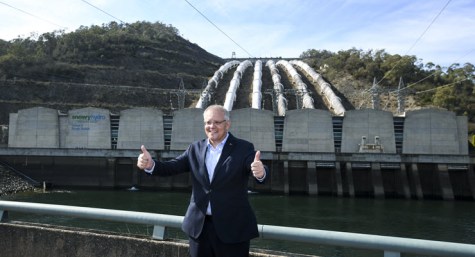 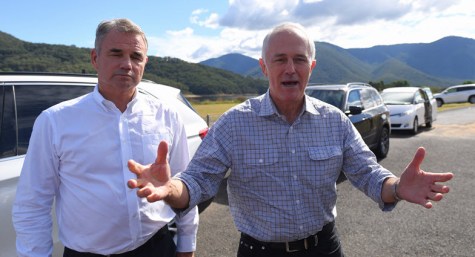 He’s got a record of pushing stuff uphill.

Thought I’d stumbled onto a proposed story-line for Utopia.

Exactly what I was just thinking! God it’s terrifying. And why do they keep trying to drop to News Corp tabloids? They have seen how well that worked for Tony Abbott. I love that Fairfax keeps getting the scoop first.

And if climate change is real then the hydro scheme will be dry every other year. On the other hand it is a long time since a year without sunlight.

As I have said elsewhere, a pumped hydro system is a closed system. It relies not on rainfall, and the water doesn’t leave the system after generation. The only loss is to evaporation.

Bernard, I think the figures being “bandied around” originated from a salesman trying to pull the wool over our eyes. There is no such thing as “2000 megawatts of energy”, or “350,000 MW/h” of storage capacity. It’s gobbledygook.

I think we’re being taunted with the illusion of a system which really could deliver 2000 MW of power continuously. After all, it would be 8% of the power consumed on the Eastern Australian grid. But the few seconds it takes us to question the figures is the time we should have been demanding further details. Especially, “for how long?” And “in what quality seasons?” Instead it is time during which the salesman gestures grandly with one hand while he fumbles for our wallet with the other.

Similarly it would be great if the system had a average daily range of 350,000 MWh. It would allow the system to turn about fifty gigawatts of intermittent wind power into a dozen gigawatts of carbon-free baseload. But it isn’t what the salesman said. He just allowed us to gather it.

We had better check our wallets.

However, the Snowy Mountains Scheme already has a pumped hydro storage facility – Tumut 3.
It has a generation capacity of 1800MW, the upper reservoir has 920,600,000m³ of storage and the system has an effective head of 150.9m. That means that the storage capacity is 376,000MWh.
Thus is it can generate maximum power for approximately 208 hours, or 8 days.
https://www.snowyhydro.com.au/our-energy/hydro/the-assets/power-stations/

The proposal is to, basically, replicate the system.

As I understand it, at present this is use to balance the supply from NSW’s coal fired power stations with demand. That is because coal fired generators are not very responsive, while hydro is.

“Similarly it would be great if the system had a average daily range of 350,000 MWh. It would allow the system to turn about fifty gigawatts of intermittent wind power into a dozen gigawatts of carbon-free baseload. But it isn’t what the salesman said. He just allowed us to gather it.”

The round trip efficiency of a pumped hydro system is around 80%, similar to a battery. That means your 50GW excess intermittent wind power will yield 40GW on demand from the pumped hydro power station.

Wayne – notionally a Snowy 2 is a great idea, but the question to be asked is, is it the highest priority in terms of the transition to a FF free future? Is it the best way to spend time, political capital and money? Given the environmental vulnerability of the NSW highlands and the unique nature of the KNP, and particularly the region around Tantangara and the Upper Murrumbidgee, is it the right project at all?
Essentially, Snowy 2 would overcome the restrictions on storage of having only 3 pumps at T3 by recycling water from the Tumut cascade back up to Tantangara. Tantangara has a surface area of 21 million square meters, so each meter level change in Tantangara, running down into Talbingo, produces more than 30GWh or more than 1h of average electricity consumption in Australia. Is that the most pressing need? IMO no, SA is transmission constrained and needs local storage. In fact local storages along the east coast would make better use of existing transmission. But these schemes take time and effort to put together, to reform the arrangements for supplying power and sharing the benefits. And none of that seems to be on MT’s agenda.

I agree Mike, more localised storage would be better and would give a measure of redundancy in the system.

I think that the attractiveness of the Snowy 2.0 scheme for MT is that it is there and it looks easy just to add some capacity.

There have been a number of sites in South Australia identified as possible locations for pumped hydro systems, including a few ones that could use sea water
– won’t have to worry about running dry there. I understand that there are some feasibility studies into sea water pumped hydro in South Australia underway at the moment. They could prove valuable for that state’s energy reliability.

Wayne & MikeW – thanks for those serious figures.
On SA using pumped sea water for hydro power, presumably atop the Flinders – say Lake Torrens or similar declivities, that would be perfect for an idea I’ve promoted for over 50 years, filling (or rather, attempting to fill) Lake Eyre with sea water to restart the ancient evaporation/precipitation/drainage/ ad infinitum cycle which created and sustained the Channel Country and the Overflow.
This made the Corner Country of SA, NT, Qld & NSW, currently denuded, compacted semi desert, an idyllic landscape of fish traps, water fowl and abundance.

The proposed sea water facilities look to be near Port Augusta