Big W challenges staff to raise share price ... Joyce could be Kiwi of the Year ... Abbott drunk on the job ...

How not to motivate your staff. The woes at Big W are well known, with parent company Woolworths revealing in this week’s financial results announcement that Big W’s loss before interest and tax was $150.5 million for the year. Ouch. Staff are probably well aware that the bottom line isn’t looking great, but is reminding them of the share price the best motivational tool? A sign spotted in a Big W staff room this week features the message: “Today’s share price $27.02. Tomorrow’s price is up to you!”

Is the company implying that is front-line staff who are at fault for the dire outlook for the department store? It doesn’t look good to us. 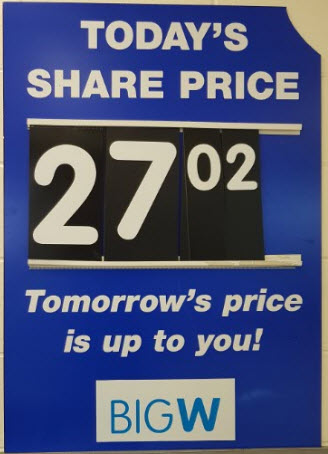 Drunk on the job. It’s not unusual to stagger through a day at work feeling a bit under the weather because of a few too many frothies or red wines the night before, but most of us can’t lay claim to passing out drunk at work — and getting away with it. Former prime minister Tony Abbott has admitted to missing five key votes in 2009 after a night on the sauce when he was opposition leader and the Rudd Labor government was passing its GFC fiscal stimulus in an interview with Annabel Crabb for the ABC’s The House.

“I lay down, and the next thing I knew it was morning,” he told Crabb.

Daily Telegraph national political editor Sharri Markson tweeted her story from 2009 this morning, when she wrote “Abbott … fell asleep after a night of drinking witnessed by MPs from both sides of Parliament”. Asked if he was drunk, Abbott said: “That is an impertinent question. I had dinner with the gentlemen you mentioned, there’s no doubt we had a couple of bottles of wine, maybe two. This is an impertinent question. I’m going to politely hang up now.”

She should feel vindicated now — the question wasn’t that impertinent at all. 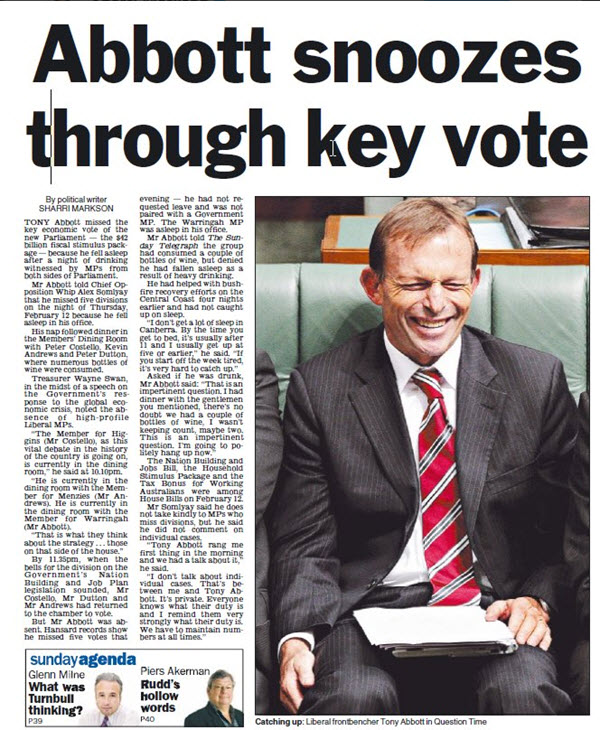 Wunner wunner. Barnaby Joyce is a frontrunner in the New Zealander of the Year awards, according to a report in the NZ Herald on Friday. Well played, Kiwis. Our deputy PM, who is floundering in a Section 44 mess of his own making, can at least know he is beloved in his own country. A spokesperson for the annual awards told the Herald Joyce’s eligibility for the awards would be assessed after nominations close on September 18. This is turning into a tug-of-war of Russell Crowe proportions.

Wives and roses. While the marriage equality debate rages around us, it would appear the NSW Governor is finding a way to honour the institution of marriage in a vintage manner. A new breed of Grandiflora rose named “The Governor’s Wife” was planted on Thursday to “honour the contribution of NSW Governors’ wives throughout history”. How very royal. The queenly varietal comes courtesy The Rose Society of NSW of which the current governor, His Excellency General The Honourable David Hurley AS DSC (Ret’d), and his wife are patrons. We are yet to hear if taxpayers footed the bill for this rose. Ms Tips reckons this breed would make a particularly sweet bouquet when a (female) governor finally gets to marry her wife.

Halls of equality. Yesterday Crikey told you about a robocall a tipster had received regarding updating details for the marriage equality postal survey and asked if anyone else had received anything similar. One of our readers was duly good enough to furnish us with a recording of the whole thing.  Turns out it was from Victorian Trades Hall Council. “Nadia” has been calling people and telling them “we need millions of Australian’s to stand up for their families and friends and neighbours” before reminding the recipient of the deadline, and directing them to Australian Electoral Commission website to update their details. It goes on to suggest if the listener is particularly passionate about a voting yes, they can visit the Trades Hall website and contact an organiser for an equality poster.

That the VTHC — which co-ordinates union activities and campaigns in Victoria — is pro-marriage equality will be no shock to anyone who keeps an eye on its social media activities. For example, the header of its Facebook page says “equality is union business” next to a raised fist. The word “business” is underline in rainbow colours, which also for the background of the Trades logo in the profile picture:

It’s a gas. Last Friday, US oil and gas giant Chevron surprised everyone by ending a challenge to tax assessments by the ATO. The Tax Office had been fighting a High Court appeal from Chevron over a $340 million Federal Court decision against Chevron on its transfer pricing methodology, which threatened to set a precedent for multinationals in Australia to pay more tax. Chevron rolled over early last week. The decision will have the effect of boosting tax revenues to the federal government by around $1 billion a year over the next decade and means Australia will get earlier access to the fruits of the LNG export boom.

And then at the start of this week, the company let it be known that its chairman and CEO, John Watson, will step down by the end of September and be replaced by vice-chairman Mike Wirth. Watson had been in the role for seven years and had driven the two biggest resource projects in Australia, the Gorgon and Wheatstone LNG projects off the Western Australian coast. Gorgon, which started operations last year, cost US$54 billion, about US$17 billion more than its budget when the final investment decision was taken in 2009. Wheatstone, which is now in the final stages of commissioning, will cost about US$34 billion, US$5 billion more than originally planned. Plus that tricky tax business. But we’re sure Watson just wanted to take a Well-Earned Break, as Gerard Henderson would say.

Putting aside the ethics of being that inebriated during parliamentary sitting hours, a dead drunk/fast asleep Abbott would be preferable to the alert version.

What would an alert version of Abbottrocious be like? shome mishtake shorely?

I read elsewhere that Abbott’s missed votes due to the grog occurred when Turnbull was opposition leader?

Charles Richardson
Reply to  The Curmudgeon

Indeed. According to the report it was 12 February 2009, when Turnbull was leader.

Yes, his colleagues then rewarded Abbott’s foul behaviour a few months later by making him leader. The bar being set lower & lower….

… so that he can lean on it in a blokey way, elbows in the puddles of spillage?

I’d like to know if he paid for the wine.

If it was in the Parliamentary dining room, whoever signed would only be paying a heavily subsided bill.