Save our statues: Stan Grant compared to the Taliban, Stalin and Mao for fictitious proposal

Stan Grant has not suggested tearing down statues of English settlers. But don't let the facts get in the way of a good story ...

ABC indigenous affairs editor Stan Grant is out to get our Aussie statues, which makes him all manner of deplorable, according to Thursday’s tabloids.

Last week Grant wrote a piece inspired by the recent statue drama in the US, interrogating how Australia interacts with the commemoration of some of the more troubling aspects of its history.  Yesterday he wrote a piece about the “damaging myth” that Captain Cook had discovered Australia, observing “and to dare challenge this ‘discovery’; how impertinent. I can hear someone saying ‘know your place’.”

Grant is not being rhetorical there — people immediately started saying words to that effect. Broadcaster Alan Jones tweeted today: “If Stan Grant keeps going the way he is in relation to AUS history and monuments he’ll go the same way as Yassmin Abdel-Magied”. If Jones means that Grant will encounter a disproportionate, hysterical response aimed at silencing him, it would seem he’s bang on the money. Behold the considered, thoughtful response: 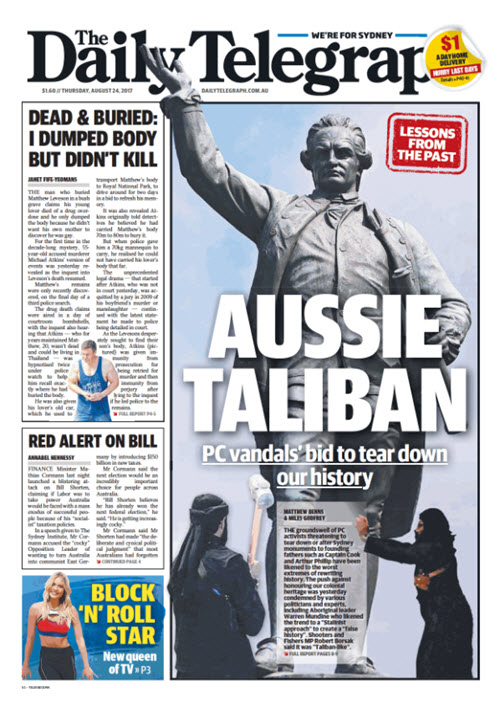 The Daily Telegraph quotes New South Wales Shooters and Fishers MP Robert Borsak describing the proposal as “Taliban-like” and uses the word in the headline of its front page story on the matter, thus combining the Tele‘s two favorite topics: politically correct lefties and Islamic radicals. Shame no dole bludgers found a way to get involved.

Joseph Stalin was a particularly popular choice for comparison in the Tele piece. Indigenous leader Warren Mundine had this — “All this nonsense about changing things — we cannot look back at history with our modern minds otherwise we would have to tear down the pyramids because they were built by slaves”.

“Trying to have a Stalinist approach and whiting out people’s names is false history.”

NSW Liberal MP Peter Phelps hailed Captain Cook and Arthur Phillip as heroes and said “attempts to rewrite our public history for the sake of political correctness — which is what these activist want to do — is little better than Stalin erasing his political opponent from photographs”.

Andrew Bolt’s column, also in today’s Tele attacks the task of historical comparisons with pick’n’mix enthusiasm — he simply couldn’t stop at one:

“Blanking out history is a true sign of the totalitarian. Stalin did it by having photographic records doctored to remove images of his enemies. The French revolutionaries behind the great Terror did it by destroying monasteries and restarting the calendar as if history started with them.

Mao did it by declaring war on the “’Four Olds’ — including old culture — and tearing down reminders of China’s past, from the old walls of Beijing to the cemetery of Confucius.”

Perhaps most terrifying of all…Tony Abbott told 2GB‘s Ben Fordham on Wednesday that a Bill Shorten-led government would bring about “political correctness on steroids”.

But, as the Tele points out, Grant’s piece never once suggests that a monument be torn down. Surely the minimum requirement for a proposal to be “Stalinist” is that it actually exist.

Mundine says rather than tear down existing monuments, we need more memorials to first Australians. And that seems to be exactly what Grant actually argues for in his original piece:

“America is tearing down its old monuments; it is hard and it is painful. Captain Cook’s statue stands in the centre of our biggest city. There are Indigenous people who for good reason would prefer to see it removed. Personally I accept that it remains; Cook is part of the story of this nation. But surely we need no longer maintain the fiction that he “discovered” this country. It dishonours the people who reached this continent 60,000 years before Cook.”

Keith Windschuttle, whose column in The Australian was the first return of fire from the culture described Grant’s column as “sheer journalistic opportunism”, concluding “Grant and others in the media are encouraging racial conflict for no good reason, except for the dramatic news reports they would like to see generated. They should be ashamed of themselves for their wanton provocation.” We look forward to a similar rebuke aimed at the response.

Charlie writes chiefly about industrial relations, politics, culture and social services. Prior to Crikey he worked in various roles across government and unions and was a researcher for RN's the Daily Planet. He hosted the Alternative History on Triple R radio, and is a regular guest and occasional host on Breakfasters. He spent the 2019 election in Warringah, covering the fight for Tony Abbott''s seat.

39 thoughts on “Save our statues: Stan Grant compared to the Taliban, Stalin and Mao for fictitious proposal”