Rudd and Abbott agree on this extremely impractical idea

Our two most famously helpful former prime ministers have weighed into the possibility of war with North Korea by suggesting we invest in a missile defence system. Are they right this time?

The world’s tiptoe along the precipice took a distinctly wonky gait in recent weeks, with a war of words between the leaders of nuclear powers North Korea and the USA spitting out scorched earth biblical imagery.

Luckily for us, Kevin Rudd and Tony Abbott have a solution for all our apocalyptic woes: go shopping for an Australian missile defence shield.

Last week North Korean leader Kim Jong-Un was good chap and decided not to attack Guam, with US President Donald Trump accepting this was a wise and reasoned decision.

The idyll lasted about four days — North Korea’s foreign ministry had this to say about Australia’s commitment to join war games conducting by the US and South Korea:

“Not long after the Australian Prime Minister had stated that they would join in the aggressive moves of the US — even referring to ANZUS which exists in name only — the Australian military announced that they would dispatch their troops to the aggressive nuclear exercises of the US. This is a suicidal act of inviting disaster as it is an illustration of political immaturity unaware of the seriousness of the current situation.”

When the tensions first began to escalate, our famously helpful former prime ministers, Kevin Rudd and Tony Abbott both put forward the argument that Australia must urgently consider putting in place a missile defence shield.

Russia, the US and Israel all have either land or sea-based defence systems in place to fire interceptor missiles to swat missile attacks from the sky.

Defence industry Minister Christopher Pyne told Radio National breakfast at the time that the idea was “patently absurd”, saying it would be costly ineffective and time consuming. So who’s right, and are we at risk?  Is a Star Wars solution our only hope?

James Dwyer, Teaching Fellow at the School of Social Sciences University of Tasmania  says the arguments of Rudd and Abbott simply don’t stack up.

“The first issue you come up against is that there simply is no current system that can defend against Intercontinental Ballistic Missiles,” Dwyer told Crikey. “Other powers in the region like Japan and South Korea’s systems work because they can knock out short range missiles. ICBMs fly too fast and too high for existing systems for that.”

“Even if you could buy an off-the-shelf missile defence system, it would take years to roll out and have huge costs, because you would have to put so many in place, Australia is so big.”

The inadequacy of missile defence systems against North Korea becomes worse when you add in the nuclear element.

“There’s no real effective defence against a nuclear weapon, there’s only deterrence,” Dwyer said. “So we’re under the US nuclear umbrella and if we were attacked, the US retaliate as though they had been attacked.”

Which doesn’t sound reassuring, but Dwyer inists that North Korea have have “bigger fish to fry” than Australia.

“The thing to remember is, firstly there’s a big difference between testing these weapons and having the capability to use them,”Dwyer said. “Even if North Korea had, say 10 to 20 nuclear weapons, they aren’t going to waste one on us. They know it would be suicide to initiate a conflict of this sort, so they would be using them on regional enemies like Japan and South Korea.” 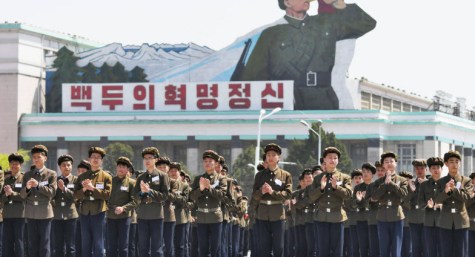 How to assuage North Korea and avoid total war 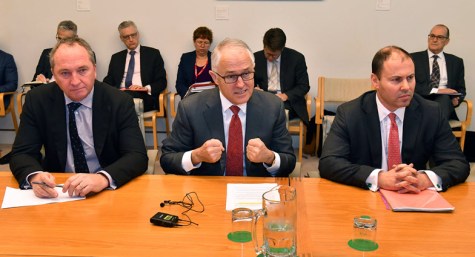 One of the joys of the Cold War was that the Soviet ICBMs were known to have severe accuracy problems – about which state (not city) they were going to hit. This was a great secret in the US military as if it had become known their budget would have been heavily cut.
Meanwhile North Korea says it can put a missile with 2o miles of Guam – without specifying which side of Guam – but no evidence has been provided for even such a poor accuracy. No evidence either for how many warheads of what sort of quality.
So what are we defending against? It seems we must defend ourselves against our own politicians.

KRudd and rAbbott say: Australia must urgently consider putting in place a missile defence shield. It just so happens the good ol’ U.S. has a spare missile defence shield and it only costs a squillion $$$, it might or it might not work. Quick cancel all social wellbeing programs, medical, hospitals, schools, sell medicare, sell the rivers, roads, etc. Buy those fucking missiles and build the nuclear fallout bunkers!

Damn that budget emergency’.
If the Libs hadn’t created that, we in Aus. would be able to afford two of those missile screens.
But at least we have Jinderlee, that will tell us when they are coming, and we might have time to kiss ourselves goodby. I’ll leave the Ass kissing to the Yanks, donkeys probably taste terrible.

There is actually a quite effective missile defence system available, it just doesn’t happen to be American. A cheaper form of deterrence that having our own nuclear deterrent is pursuing foreign policies that make the risk of a nuclear attack vanishingly small. Funny how that is never part of the discussion in Australia. So wedded are we to the Americans we would rather be fried to a radioactive crisp that think outside the box for even a nanosecond.

On the assumption that the pic above wasn’t photo-shopped krudd seems to be doing the classic “I’m with stupid” except he is pointing downwards towards the, presumably, more important part of the Abbottrocity’s anatomy.
Attention Deprivation, two for the price of one and the public debate dropped 50% of its already abysmally low IQ rating.

Recently, the issue of North Korea and the war with it have appeared more and more often in the press. It seems to me that something will happen soon, so I really think that this suggesting is right.