The first total eclipse in almost four decades sends the US media into lunacy.

Today in Media Files, US media goes all out with coverage of the solar eclipse, and Daily Mail Australia went all out with a write-up of the ABC’s attempt to wipe Israel off the map without waiting for an explanation.

Solar eclipse of the heart. The total solar eclipse has sent US media into a frenzy, with live coverage from most networks, Time showing a 360-degree view of the eclipse, and NPR putting a team of 22 videographers on the story. Front pages across the country were dedicated to the eclipse, and the American ABC has been flashing back to its coverage of the last solar eclipse, in 1979, where anchor Frank Reynolds threw forward to yesterday’s eclipse with: “May the shadow of the moon fall on a world at peace.” But the weirdest eclipse coverage has to be an interview CNN did with ’80s pop star Bonnie Tyler, crossing into the network from an eclipse cruise, where she was due to sing her hit Total Eclipse of the Heart during the eclipse. CNN’s bizarre interview finished up with Tyler singing her favourite line from the song, while anchor John Berman waved a lighter, after he’d asked her what the difference was between a total eclipse of the heart and a total eclipse of the sun. 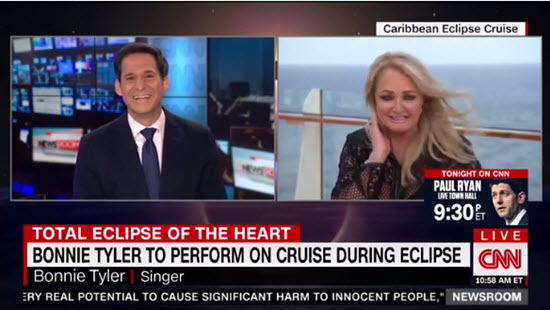 No explanation necessary. A Daily Mail Australia story on Saturday covered an Israeli activist’s outrage over an ABC TV news graphic that was purportedly part of the ABC’s attempts to “wipe Israel off the map”, without waiting for an explanation from the ABC. The graphic was used in an ABC story about Lebanon changing laws that allowed rapists to escape punishment if they married their victims, and showed countries that either had repealed this law, or where activists were campaigning for it to change. Avi Yemeni posted on Facebook that Israel’s exclusion was an attempt by the ABC to “wipe Israel off the map” in an attempt to “appeal to the Jew hating crowd”. Reporter Fiona Connor wrote up the story on Saturday night, and gave the ABC an hour to respond before publishing the story without a response. The ABC responded on Sunday to explain that Israel had not been included because it had never had such a law. The Mail has since updated its story.

Breitbart apologises for photo on migrant story. Conservative news website Breitbart has apologised to German footballer Lukas Podolski after using a picture of him on a jet ski to illustrate a story about illegal immigration. Podolski threatened legal action over the use of the picture on a story about describing gangs trafficking migrants from Morocco to Spain on jet skis. Breitbart has now added an apology to the story in an editor’s note, saying the image was included “as an illustration of a person on a jet ski”. “Breitbart London wishes to apologise to Mr. Podolski. There is no evidence Mr. Podolski is either a migrant gang member, nor being human trafficked,” the apology said.

Front page of the day. The NT News‘ front page headline today is only rivalled by the online head for the same story: “Old fella has a reptile dysfunction“. 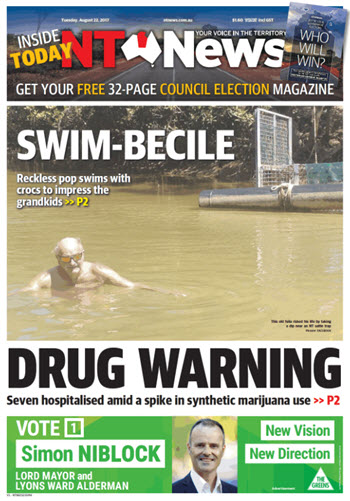 The Project expands to Sundays. The dying Ten Network isn’t going down without a fight. It has found the money and resources to take the current affairs fight right up to the lazy Nine and Seven networks, and for that matter the ABC and SBS. Ten will add an edition of The Project to its Monday to Friday nights from this Sunday at 6.30pm.

The panellists this Sunday night include Peter Helliar, Dr Chris Brown, Natarsha Belling and Rachel Corbett. Apart from Insiders on Sunday morning and the weak weekend editions of Today and Sunrise, the day and early evening schedule is short of any sort of current affairs. While 60 Minutes is a Sunday night regular, it’s soft, having morphed to become more public affairs than current affairs. And Seven plays programming ducks and drakes with Sunday Night — running it for weeks, then pre-empting it, as it has done for this Sunday night to allow yet another Princess Diana special to start at 8.30pm after debuting (finally!) Little Big Shots. The ABC doesn’t have any current affairs on Sunday evenings (Insiders is a hard act to follow for the politics obsessed ABC newsrooms), nor does SBS.

During the week, The Project has carved out a solid national audience of up to a million some nights for the key 7 to 7.30pm second half of the program. That part of the program regularly pulls more viewers (especially in metro markets) than the ABC’s 7.30, so it must be doing something right. — Glenn Dyer

Bernstein: journalists should investigate Trump’s mental health. Veteran investigative journalist Carl Bernstein — of Watergate fame — says journalists should be investigating whether US President Donald Trump is fit for office. Bernstein appeared on CNN over the weekend and told the network that some Republicans, intelligence officials, military officers and business leaders were “raising the very question of his stability and his mental fitness”. “We need, as journalists, to make this our primary function right now,” Bernstein said.

Glenn Dyer’s TV ratings. The Block once again dominated viewing last night with 1.656 million national viewers, helped by Karl Stefanovic’s This Time Next Year with 1.168 million — far more viewers than anything Seven or Ten had. In fact, they had flops — Australian Survivor on Ten, for example, with 778,000, outranked by the program that followed, Have You Been Paying Attention with 869,000 (it is being held back by Survivor). Hell’s Kitchen on Seven — 841,000 nationally. Seven’s The Story Of Diana — 688,000. Doubleflop. Q&A at 9.35pm — 614,000, which is a bit more than recent episodes. It won the time slot for the full hour.

The ABC’s Four Corners other take on property also did well (well, we are all supposed to be into property, aren’t we?). However, last night wasn’t the first look at what the ABC says is our property bubble. Back in May of last year there was a report entitled “Home Truths”. Last night’s was entitled “Betting The House” (well, in gambling the house never loses). Both were worthy efforts, but both were more of the same from the ABC.

Glenn Dyer’s TV ratings: nothing fills the void of <em>MKR</em>

I feel I should point out that Australia is getting a total solar eclipse on July 22, 2028 which will have totality lasting a incredible 5 minutes in the Kimberley. It’s usually cloudless in July/August in Northern Australia, so the viewing conditions should be excellent.

An eclipse sent the American media into lunacy?
That must have happened back in 79 at the last eclipse. The Yank media has been in a state of lunacy for as long as I can remember, along with the bulk of the population.
Thus their favourite song line about the “Land of the freaks and home of the brainless”.
However Mal Talkbull and his freaks in Canberra are giving us a major boost towards catching up with them.

It’s hard to argue with Bernstein – it’s harder to see why parts of the media haven’t broken ranks to do just that? It’s not as though Trump isn’t throwing hints around every day…..
Maybe they’re just waiting for someone to go first?

How did the DM “update” a story which was totally wrong in fact, focus and rhetoric?
The rag of course would be used to apologising for its continual garbage so what, apart from pulling the entire piece and copious mea culpas, should it do, it it were a real newspaper?