Tony Abbott, in his clarion call, said vote No for religious freedom and freedom of speech. Michael Bradley explores how Abbott's invocation of freedom relies on trampling over the freedoms of others.

Religious freedom is quite the thing at the moment. Of course, it’s not a catch-cry of identity politics, which as we know is a rhetorical error committed only by Marxist relativists (you know — women, gays, dark people). No, religious freedom is a precious jewel with super-resistance to irony.

On marriage equality, religious freedom has taken centre stage as a show-stopper so obvious that it needs no explanation. As Tony Abbott said, “If you’re worried about religious freedom and freedom of speech, vote no.” That little statement needs quite some unpacking.

The intersection between religion and law has been a point of frequent explosion since both sets of rules were first invented. It’s worth exploring what exactly the deal is in modern Australia.

As in America, the drafters of the Australian constitution considered religion a hot enough topic to warrant its own special provision. Ours is section 116, which says this:

That’s our effort at the separation of church and state. The US constitution’s Establishment Clause goes further and has founded an extremely strict approach to separation that would prohibit, for example, our federal government’s program of funding religious chaplains in public schools. Here, however, that’s considered OK because the High Court has adopted a much more restrictive interpretation of what “establishing” a religion means.

The main point to notice, however, is that section 116 is designed to cut both ways. It seeks to remove religion as an active participant in lawmaking and qualification for engaging in government, which means we cannot have a state religion and we cannot prevent atheists from becoming MPs or public servants.

Section 116 also extends protection to the free exercise of religion. This is the only thing Australian law has to say in relation to Tony’s “religious freedom”. It provides the outside boundaries of the human right which he invokes.

[This postal plebiscite bullshit is nothing but fear, wrapped in cowardice, inside stupidity]

In the abstract, the concept of the “free exercise of any religion” sounds straightforward enough. Religious faith is a personal matter for each citizen, capable of infinite degrees of difference and individual interpretation. If I choose to worship one god, or a thousand, or the sun or Hello Kitty, the state has no business telling me what I should or should not believe.

It’s interesting that Abbott chose to couple religious freedom with freedom of speech in the same phrase, as equivalent grounds for objecting to marriage equality. It’s true that they’re equally irrelevant to equality before the law, but it’s actually a quite insidious debating device which he’s using there. Because freedom of speech and freedom of religious observance have something in common, to a point, and then they diverge wildly in the Abbott construct.

To the extent that the exercise of religion involves belief, worship, prayer, faith, abstinence, obedience, and a billion other personal acts which involve no other person but oneself, that exercise is analogous to the exercise of free speech. It’s personal choice, driven by personal conscience or desire. There are arguable outer limits in both cases: free speech, even in the extreme American version, is taken not to extend to shouting “Fire!” in a crowded theatre. Religious freedom, even passively exercised, might impact on other social norms or conveniences, thus for example we have special laws for balancing the right to cover one’s face against the need to identify people.

If religious freedom is restricted to the choices of the individual who holds the religious faith, then the equivalence to free speech holds true. In the debate on marriage equality, both freedom of speech and freedom of religion are then revealed as complete irrelevancies.

To amend the law to allow any two people to get married, not just couples who would meet the approval of one or other religion, has literally no impact on the ability of anyone to exercise either freedom. They can still say what they like — Tony can continue to express his personal dislike of same-sex relationships — and they can still believe what they believe. Tony will never be prevented from maintaining his personal conviction, whether it’s a religious belief or not, that the only marriages which God accepts are those between people who claim to be heterosexual.

However, if we extend the concept of religious freedom beyond personal observance to where Tony really wants it to be, then we have a problem. You see, Tony and Lyle Shelton and Eric Abetz and their fellow warriors for a No vote do not contemplate religious faith as a purely personal compact; they demand a far wider space for it within society. Yesterday the Catholic Church threatened to dismiss staff who wed their same-sex partners if marriage equality is legalised in Australia.

The real argument here is about the right of people who hold a particular religious belief (in this case, that LGBTI people cannot marry) to impose the consequences of that belief on other people who do not share it. For the religious freedom justification to stack up, its proponents must maintain that it is essential to the continued existence of their faith that their beliefs are given force of law.

The present status quo in the Marriage Act is a legal expression of exactly this idea. The fact that restricting marriage to a man and a woman is a rule which is common to most mainstream religions does not alter the reality: the 2004 amendment imposing the restriction on the law was the enactment of a religious belief.

Reversing that amendment, as the marriage equality campaign demands, will reinstate equality before the law. As I’ve said, that’s an ancient secular legal principle which predates all of the religions arguing against it. That equality offends many religions’ beliefs; the Abbott argument is that those beliefs should be held paramount.

So now we’re in the territory of religion not being separated from state; rather, religion dictating to state. I do not say that the present Marriage Act definition of marriage technically offends section 116; it doesn’t get to the level of imposing a religious observance. But it absolutely offends the spirit of secular democracy underpinning our Constitution, which is all about both allowing maximum personal freedom of conscience and not imposing one’s beliefs on others.

In the end, the literal words speak for themselves. “Freedom” of religion is exactly that and no more; the right to believe what you believe and act on that belief as you choose. Freedom does not incorporate, in any sense, the right to tell others how to live or, critically, the right to impose limitations on their rights under the civil law.

The civil law, in turn, is obliged to extend equality of rights to all.  Religion has no place at that table. 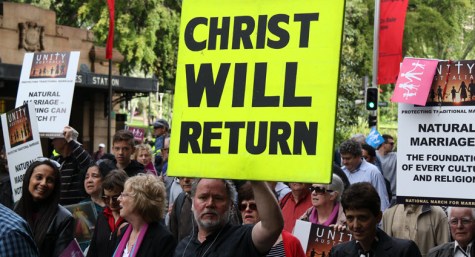 Attention religious bakers: you may not discriminate against LGBTI people. It is the law. 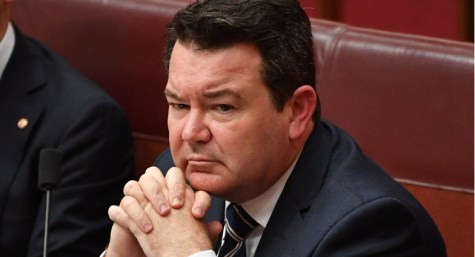 Excellent and devastating (for the religious naysayers) analysis. Thank you Michael.

If you’re worried about religious minorities dictating public legislation and policy to the masses, up to and including what you do in bed and with whom ………………….

Excellent argument, Michael. Literally the most incisive, sensible, practical, least inflammatory analysis I’ve seen on this matter in Australian media, and in my view, one of your best contributions to this organ to date.

Geez, too hard. Good read. Sick of it though. If I see the words LGBTI and marriage in the same sentence after all this is done, I’ll go nuclear.

Great stuff, Michael! Very good explanation of what is required (and not!) under the Constitution.
It seems this might apply to other politico/religious questions on such things as abortion and euthanasia perhaps?

Openness to closedness is a one-way tap that must inevitably destroy the open society.
To protect multiculturalism and criminalise hate speech it might well be made a legal requirement to accept every person’s right to hold, promote, reject, proselytise, disrespect, blaspheme against or outright condemn any religion whatsoever along with its symbols and personal requirements. This would include a prohibition against harassment of any person on religious grounds.