Junkee editor Osman Faruqi has sent Mark Latham a legal letter after Latho accused him of giving succour to terrorists.

Today in Media Files, Junkee political editor Osman Faruqi brings in the lawyers over Mark Latham likening him to a terrorist, and Laurie Oakes says goodbye to the press gallery.

Latham and Daily Mail sent defamation letters. Junkee‘s political editor Osman Faruqi has sent a legal letter to Mark Latham and his Canadian production company The Rebel House, and Daily Mail Australia, over comments Latham made on his webcast. BuzzFeed reports the defamation concerns notices were sent earlier this week. Latham was referring to a Twitter conversation between Faruqi and Yassmin Abdel-Magied, who were talking about Greens senators Scott Ludlam and Larissa Waters quitting because of their dual citizenships. Latham used the tweets as an example of “anti-white racism in Australia”, saying that people on the left of politics “are giving encouragement and succour to the terrorist fanatics who want to kill innocent people in this country”. Daily Mail Australia reported Latham’s comments, but later changed its article.

Faruqi’s lawyer Josh Bornstein said through a spokeswoman at his firm Maurice Blackburn that he would not be commenting further on the case, despite commenting to BuzzFeed yesterday. Crikey was told instead to “quote his comments from BuzzFeed”. Bornstein represented Scott McIntyre in his workplace dispute with SBS after he was sacked over tweets about Anzac Day.

Doyen departs. Press gallery stalwart Laurie Oakes officially steps down as Nine Network’s correspondent as he retires today. In his last week, Oakes has savagedParliament, saying yesterday that politicians had lost the art of politics.

“This stuff this week suggesting a huge conspiracy involving the New Zealand Labour Party is a foreign, as a foreign power interfering in our politics. It’s a joke. It makes Julie Bishop look stupid. It makes the Prime Minister look stupid. Poor old Barnaby Joyce looks silly over his citizenship.”

Oakes had a farewell from the press gallery during the week, with politicians from all sides stopping in to see him off. 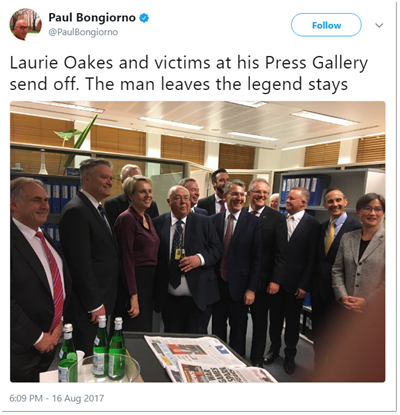 New Spectrum editor named. Fairfax has appointed a new editor for its Spectrum liftout. Shona Martyn, HarperCollins publishing director, will take on the role after 17 years at the publisher. Martyn has previously been editor of Fairfax’s Good Weekend and was founding editor of ACP’s HQ magazine. She is replacing Louise Schwartzkoff, who has left to run content marketing for Sydney University’s fundraising campaign.

Hate in America. The US news magazines have released their front covers for the next week, and president Donald Trump and racism is dominating their illustrations this week.

Am I on the record? White House chief strategist Steve Bannon’s colleagues weren’t the only ones shocked to read an in-depth interview he gave to a small liberal magazine in Washington, DC — so was he. Bannon called the author of an article in the magazine about China and made loads of newsworthy comments. He said there was no military solution to dealing with North Korea, and that the US was at “economic war” with China. In writing about the interview, journalist Robert Kuttner said:

“The question of whether the phone call was on or off the record never came up. This is also puzzling, since Steve Bannon is not exactly Bambi when it comes to dealing with the press. He’s probably the most media-savvy person in America.”

Bannon has since told colleagues he had no idea the conversation was on the record. There’s no word yet on whether Bannon — who’s been under increasing pressure — will keep his job. His colleague Anthony Scaramucci was given the boot barely before he’d started as Director of Communications at the White House after a foul-mouthed rant to a New Yorker reporter.

Glenn Dyer’s TV ratings. The great Eddie McGuire comeback on The Footy Show on Nine faded last night. It hasn’t completely stalled, but more gas will be needed to pick it up after nearly 20% of the previous week’s national audience didn’t return for round two. The Melbourne audience plunged by more than 21% from 381,000 a week ago for the return, to 299,000 last night. And that the national audience fell 19% to 503,000.

Not a good look. Nine said the program’s peak audience (that’s viewers watching for at least minute) was 380,000 in Melbourne, which is just shy of last week’s average, which is a sure sign the audience isn’t with Eddie.

Seven’s Front Bar continues to hang in there, managing 298,000 national viewers, down from 304,000 a week ago, so its loss wasn’t as big as that for Eddie’s Effort. But it lost ground in Melbourne — its audience slipping to 164,000 from 180,000. But it’s in a far better spot so far as ratings/revenue are concerned. Eddie’s effort has to get big numbers because of the higher cost. The 21% slide in Melbourne last night is bad news. The Bachelor managed 1.04 million for Ten last night. 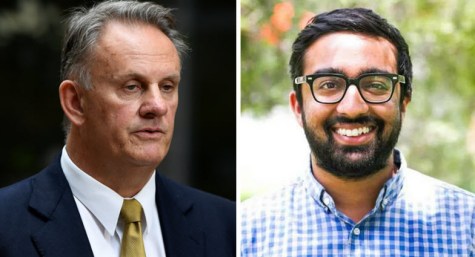 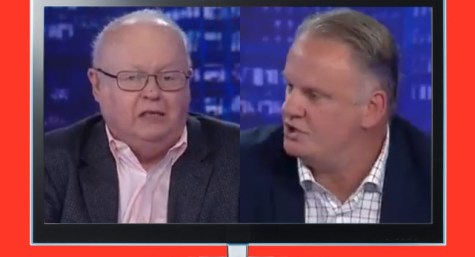 Oakes had timed this well albeit accidentally. Better to depart parliamentary reporting before the players alternately defy the Constitution or engage in mud-wrestling.