We found out exactly how Pauline Hanson was identified by Senate security ... early deadlines mean the AFR misses the news again ... and ABC is happy with Uhlmann's editorialising ...

Is it really about security? One Nation Senator Pauline Hanson’s burqa stunt was all about security, she says, but she hasn’t made it clear exactly what kind of security she expects at Parliament House. Hanson is unrepentant about the stunt, saying she did not mock religions: “I am actually proving a point here. There was no security checks.”

So what actually happened as Hanson entered the Senate chamber with her face covered? Senate President Stephen Parry said as she entered: “I’ve been advised by the clerk via the attendant that the identity of Senator Hanson was established before she entered the chamber.”

But how? Crikey understands Hanson entered the chamber with fellow One Nation Senator Brian Burston, who was stopped by an attendant and asked to identify who was wearing the burqa. Burston said it was Hanson, and Hanson confirmed that verbally. She wore her senatorial pin on the outside of the burqa (it’s visible in photos in the chamber). We understand that the attendant did not require her to lift her veil. The identification of Hanson ultimately rested with the discretion of that attendant, who was clearly satisfied it was her.

But that is not the entire story — the security process doesn’t begin and end with entering the chamber itself. The general public are not allowed into the lobbies surrounding the chamber without clearance. There are guards and attendants ensuring anyone they don’t recognise has a pass.

“All people given access to the private areas of Parliament House have been identified and screened,” the spokesperson said.

Crikey contacted Hanson to clarify how she was identified, and what she would consider an appropriate level of security in situations where someone attempts to enter the chamber wearing a full face covering, but she didn’t reply before deadline.

Hold the front page (and the whole paper). The Australian Financial Review‘s early deadline has bitten again, with the paper missing one of the big political stories of the day. Deputy Nationals leader Fiona Nash announced just before the Senate rose for a two-week break about 7pm yesterday that she was also a dual citizen by descent. It was a story big enough to be splashed above the fold in The Australian. But the Fin‘s early print deadline meant it was caught short, with the biggest development of the day in a growing dual citizenship fiasco missing the hard copy paper entirely.

Don’t speak too soon. Still on the Hanson stunt, while we know that expecting consistency from Hanson is probably a bridge too far, we found this passage from John Safran’s book Depends What You Mean by Extremist interesting in light of yesterday’s events. It starts with Safran asking if it’s likely Hanson will change her opinion on Islam in the future (as she was claiming she had never been against Asian immigration in the 1990s):

‘Yeah and you’re going to have some excuse abou –‘ 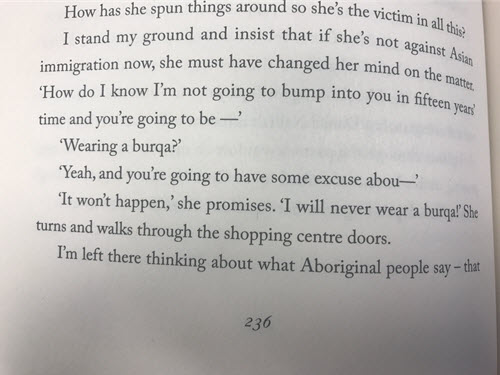 Chris Uhlmann’s anti-renewable rant A-OK. Is the ABC’s political editor Chris Uhlmann completely unbiased when it comes to reporting on renewable energy? We have reported before on his controversial (and largely discredited) rant about wind power in the wake of the South Australian blackout, and a viewer thought his recent report on electricity prices was beyond the pale. During the report Uhlmann said:

“The cause is more than 10 years of bad policy. State governments loosened the rules around poles and wires in order to boost their own revenues. Blackouts a decade ago caused some kneejerk spending on network back-ups. There’s less competition with fewer owners in both electricity generation and retail industries. Add to that the cost of stunningly over-generous green schemes, and now sky-high gas prices. It all adds up to electricity bills that have doubled in a decade.”

Is that a fair assessment, or pushing his own anti-renewables barrow? The ABC responded to a viewer complaint by saying Uhlmann was in the clear:

“In our view, the statement that green schemes had contributed to increased electricity prices was a material fact for the purpose of this story and reasonable efforts were required to ensure that it was accurate and presented in context. Mr Uhlmann’s statement … identifies six factors as contributing to increased power prices.  We note that these same six factors have been identified by the ACCC in its current inquiry into electricity affordability.”

Evolving offshore at Telstra. We hear Telstra is planning to offshore another lot of jobs in its accounting systems and data management areas.  The catch is, a tipster tells us, this offshoring will only affect the business relating to Australian individual clients, with “government and big corporate business deemed too important” to offshore.

We asked Telstra whether there were plans to send roles relating to accounting systems and data management overseas, if so, how many and which customers would this affect, and a spokesperson did not deny it:

“We continue to look for ways to reduce complexity within our business so that we can deliver better experiences for our customers. This includes digitising some systems and developing agile ways of working.

“While our size and shape will evolve, our success will continue to be built on people with deep connection to customers, expert knowledge and recognised technical expertise.”

You may have noticed that the statement makes it no clearer if Telstra actually is offshoring jobs in accounting systems and data management, so we’ve asked Telstra to directly answer the question and we’ll let you know when we do.

Was Pauline Hanson actually allowed to wear that burqa in Parliament?

If Hanson wants to wear a burqa, she should talk to my mum

The raving ABC lefty rat-bag Uhlmann.
Last night he was sanctifying St George over hwat he said to Hanson.
The Senator who did what he did for Howard when they had a senate majority (not least to senate hearings); the way he dug inot our pockets to pay to attend weddings and parties as “business”; the arrogant smug way he slips into something slimy to argue one case that suits his politics then turns it inside out to prosecute Labor, Greens and anyone else he’s at odds with; the way he misled the Senate of Man Monis letters; the way he prosecuted the case for everyone to be a bigot – as if our Brand X A-G had a moral choice last night?
Then, as he defined that “picture of a house and nation united” there was Fifield in the fore-ground – the Communications Minister courting Hanson to get Turnbull’s and Brandis’ media laws through the same senate?
I thought there was a moral in that tale ….. not the one Uhlmann was selling.

I think the contrast is rather that Chris Uhlman is failing to push the ABC’s pro-renewables barrow. It’s called integrity.

Dodger – no, it is called tendentious mendacity, in which you specialise.

Two things – Re Hanson’s sad stunt: I am also concerned about her bad grammar. It should be there ‘were’ no security checks, not there ‘was’ no security checks 🙂 and how about a [sic] Crikey.
And, Chris Ullmann’s statement about “stunningly over-generous green schemes” is totally subjective and very arguable and therefore should have been taken into account in the ABC response.