Today in Media Files, News Corp’s prodigal son has returned from the wilderness of Daily Mail Australia, and Barnaby Joyce’s Kiwi cousin wants him to embrace his roots (and the All Blacks).

Back to the fold. Daily Mail Australia editor-in-chief Luke McIlveen is moving back to News Corp as executive editor of Fox Sports. McIlveen has been at the Daily Mail since 2013, when he was poached from news.com.au — a move that led to a court case, settlement and some time on gardening leave. He had previously been editor of the Manly Daily, and chief of staff at The Daily Telegraph. McIlveen will be responsible for the sports news agenda across broadcast and digital, live sport and magazine shows. He’ll report to Fox Sports head of TV Steve Crawley. A start date hasn’t yet been set.

The move will take McIlveen out of direct competition with his wife, Kate de Brito, who is editor-in-chief of news.com.au.

Kiwi cousins embrace Joyce. Deputy Prime Minister Barnaby Joyce is facing some trouble at home over his dual citizenship bungle, but his Kiwi cousin reckons he should embrace his roots. Joyce’s cousin John Laing is on the front of today’s Otago Daily Times encouraging Joyce to barrack for the All Blacks (“cheer for a winner”). 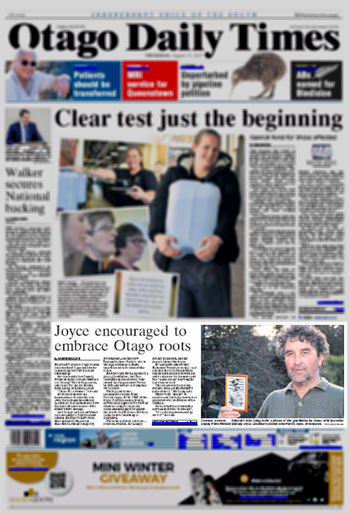 Garter and Steel. With the tumbleweeds blowing through the floors of Media House Melbourne and Pyrmont in Sydney, Fairfax eds have been scratching their heads on how to fill pages with less. One new wheeze seems promising: get journos to write up the story of getting a story. Thus on Monday, SMage readers were greeted with a story from Adam Gartrell, starting:

Halfway through, as the pace was lagging, a new character appeared:

Great work, Steel! So, not exactly Gellhorn and Hemingway in the last days of Free Barcelona, but hey, you got the story, right?

Oh well, you got the story of getting the story that your editors were too timid to run. As consolation they made you write it up for all your friends to enjoy. Win-win. Cue tumbleweeds.

Fairfax follows News Corp into real estate. Fairfax Media is now on the path to emulating News Corp by placing its growth eggs in the Australian real estate listing market via the partial spin-off of 40% of Domain to its shareholders. In his briefing yesterday Fairfax CEO Greg Hywood was upfront about Domain — it is going to continue spending money to grow the business (as is REA). Both companies are investing in financial services — mortgages and other products — which will mean extra money outlaid in the next year or so. Hywood said the first six weeks of 2017-18 had brought a 26% jump in digital revenue for Domain.

But at its briefing last week, REA was a bit gloomy about the outlook for the property sector in Australia over the next year to 18 months. While the company boosted revenue to record levels in the year to June, it revealed a 19% slide in net profit (owing to losses on asset sales) and senior management warned of a slowdown to come.

REA said the solid 2016-17 result was achieved despite a fall in residential listings during the year and “a significant decline in new dwelling commencements”. Listings had increased slightly in July, this year compared to a year earlier when July performance was affected by the federal election.

REA and Domain are both moving into financial services and other products, but REA has warned there is a slower outlook for home building and sales. And that isn’t too good for Fairfax, which is trying to convince its shareholders and others that Domain will be the next REA. And one of Fairfax’s big selling points has been the strong ties between Domain and its print assets, such as the metro papers. There the news from 2016-17 was very poor — print revenue in Domain (those glossy property inserts on Wednesdays and Fridays and Saturdays) was down 13% to $88 million and earnings before interest, tax, depreciation and amortisation off a massive 29% to just $19.9 million. Now that is bleeding. — Glenn Dyer

They weren’t all Nazis. The US papers have reacted to their president’s latest comments about the Charlottesville rally earlier this week. 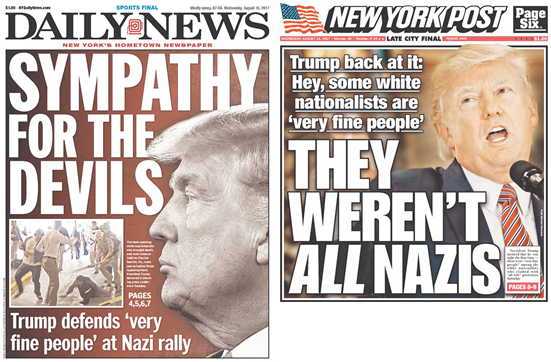 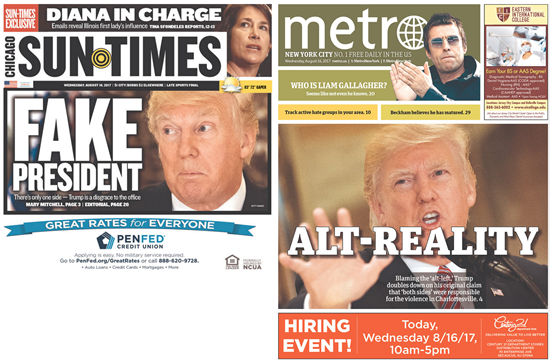 Glenn Dyer’s TV ratings. Nine’s night thanks to The Block with 1.444 million viewers nationally and the returning Doctor Doctor with 1.154 million nationally (it it a touch too frothy and sudsy? Time will tell in the next couple of episodes). That was enough to push Nine comfortably in front. Ten sparked up, but once again there was a nasty fall in viewers from The Bachelor (994,000 nationally) to Offspring (725,000) which is a pity because the latter is closer to reality than the faux events on The Bach will ever be. It is LCD (Lowest Common Denominator) TV.

Oh, Seven, left behind again by Nine and chugged into a distant second. The ABC’s Shaun Micallef’s Mad As Hell was a classic and viewers responded with the national audience back over the million mark to average 1.037 million.

Well, the Fairfax “Barnaby’s a Kiwi” story did, at least, expose his “I’m a man of strong conscience coming forward to do the right thing and dob myself into the High Court” routine as being completely bogus: as usual with these people he did it only because it was going to happen anyway.

10/10 & a koala stamp for the Garter and Steel piece.
Almost as good as watching question time. 🙂