Manus Island detainees are "frolicking" on "idyllic islands", according to this week's Crikey Wankley award winner.

Crikey believes it is important to recognise journalists and editors whose hard work gives the fourth estate the sterling reputation it has in the community. And this week, there is no one more deserving of a Wankley Award than Renee Viellaris of the Courier-Mail for today’s front-page spread on Manus Island detainees having “holidays at an idyllic island”. 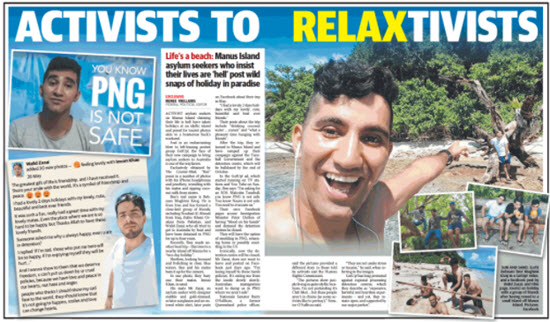 Viellaris has a long history of hatchet jobs on asylum seekers — there’s a Media Watch demolition of her work nine years ago — but today’s effort in which several detainees, one with “designer stubble and gold-rimmed, aviator sunglasses and an on-trend white shirt”* variously “frolic”, “sip coconut milk from straws” and look “bronzed” could be her crowning achievement.

For Viellaris’ edification, here’s a quick rundown of conditions on Manus Island:

Viellaris was able to find a Queensland senator to deplore the “frolicking” detainees, with LNP senator Barry O’Sullivan declaring, “I’m not pretending it’s Club Med …” O’Sullivan at least brought some factual basis to the article because Manus Island certainly isn’t Club Med — it’s far more expensive. In 2016, the cost of the facility was estimated at $1 million per detainee, as the total cost of Manus Island and the government’s other offshore detention facility headed toward $5 billion.

We can think of no better way to toast Viellaris’ Wankley than to adjust our aviator sunglasses and raise a coconut to say “cheers” to quality journalism.

No way to test for septicaemia on Manus, with doctors ‘swamped’

Cornall report does no one — and not Morrison — any credit 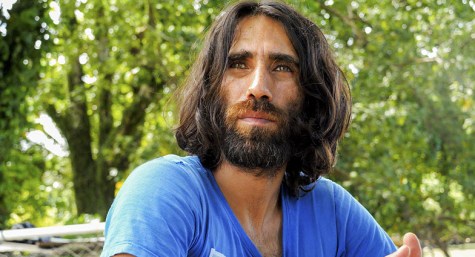 Plus they have no future.

The Courier-Mail maintains its exceptional standard by churning out consistently abysmal dreck & fanciful reporting rather than anything factual & well written.

How shocking for the dwindling number of Courier-Mail subscribers to read that a poor wretch on Manus might enjoy the luxury of laughter occasionally…or the warmth of the sun…or the refreshing splash of the ocean. I now await the Murdoch rag’s sequel on how we might make the beleaguered refugees suffer more.

But this is what the Courier Mail and it’s brother from the southerly climes does. When the Coalition is swamped and spectacularly deluged by their own excrement, run a shit story like this or some football crap.

Winding back the clock to their “exclusive” re those “refugee resorts” of a few years back?
Dutton’s getting bad press – lifts the lid and opens the gate on Manus, so that Rupert’s “keepers of the stool” can go to Manus, pick up a couple of “typical clients”, to do a PR job for him?
BS news, but very Kenny?
Seeing the predicament this government is in, given their m.o; I’m suprised they weren’t shown being fed red herrings – like they feed us in situations like this?

This is the same hack that got to splash Morrison’s “figures on what Shorten’s policies will cost” across Monday’s front page as “TAX BILL ” news that proved so “Scrotish” the next – then someone else had to wipe her mess the next day.
…. How long before we’ll be reading her “joke” pieces in Christmas crackers?